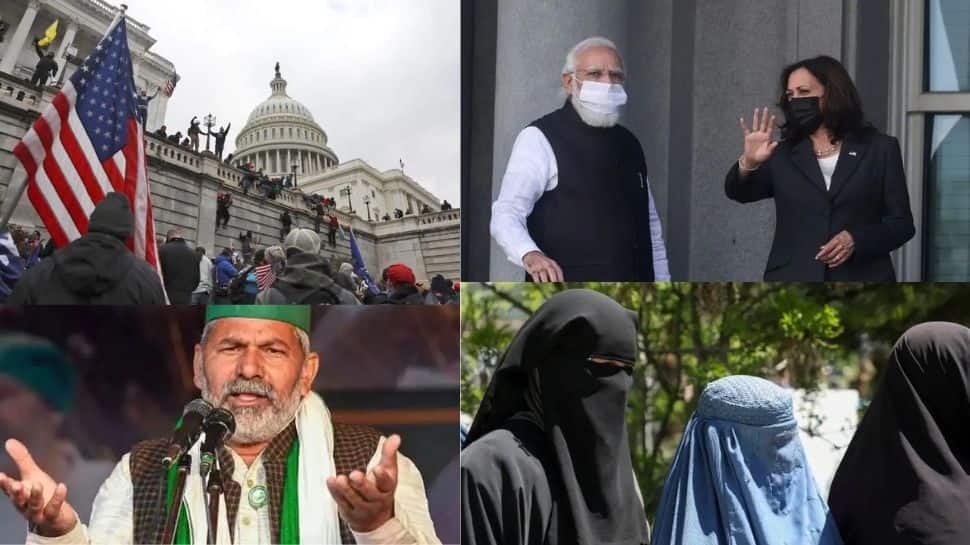 New Delhi: The year 2021 has been an extraordinary one, especially in terms of political ups and downs around the globe. While at one point, Kamala Harris created history by becoming the first woman, first black woman, and first Indian-origin individual to swear in as the Vice President of the United States, the world also became a testament to the takeover by the Taliban on Afghanistan..

As the year comes to an end, here’s a look back at all the global events that made 2021, a politically significant year in history.

An attorney by profession, Kamala Harris, who shares her roots with India’s southern state Tamil Nadu, created history by not just becoming the first woman to assume charge as the vice president of the US but also became the first individual of colour, first black woman, first migrant and first Indian-origin person to reach the spot.

Harris’ inauguration came out as a message of hope and strength for millions of women and black people around the world.

On January 6, the world saw what can be termed as the ‘darkest side of democracy’ when protests and political inclination of a section of citizens took a violent streak and turned into riots.

A huge crowd had barged into the US parliaments to siege the Capitol building with weapons and reported explosives. Condemned by the entire world that witnessed the incident in complete shock, the US Capitol riots was one of the ugliest faces of extremism in the free world.

It looked like the end of Islamic radicalism in Afghanistan in 2001 when the US invaded the nation as a part of its war on terror. However, this August brought back the horrors of stoning, public hangings, ‘parda’ system, economic paralysis and blood bath in the form of the Taliban 2.0 regime.

The new Taliban administration, which has neither a woman minister nor the ministry for women, is widely seen to be pushing the country 20 years back.

India’s Prime Minister Narendra Modi reached the US in September 2021 and created many firsts during one of his most significant international visits of the COVID pandemic era. During his much-awaited visit, PM Modi became the first Indian leader to share the stage with a US VP office holder of Indian origin.

In another first, Modi created history by holding business and investment-related conversations with top global CEOs. According to PMO, Modi in his 65-hours trip to attended 20 in-person meetings, Quad Summit and UN address.

On November 19, Prime Minister Narendra Modi announced the repeal of the three contentious farm laws that had triggered a nationwide protest among farmers. The year-long agitation, which later became a global movement, was also supported by several global leaders and celebrities including Rihanna. The resonance of the issue was also heard inside the UK and US parliament.

While several people dubbed it as a victory of democracy, others called it an exemplar of a modern-day movement.