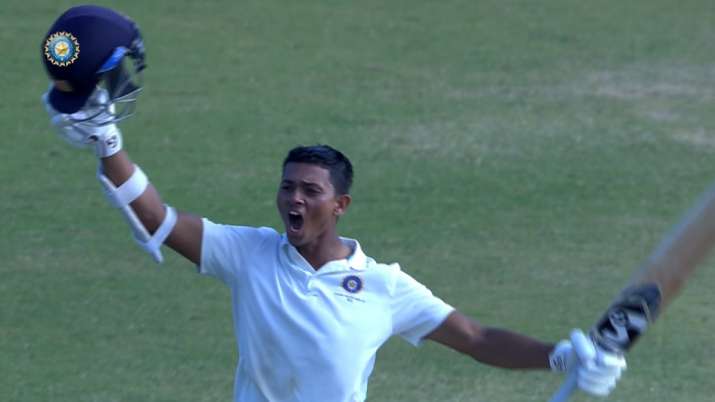 Young opener Yashasvi Jaiswal smashed a double ton in just about two-and-half sessions on the 3rd day of the Duleep Trophy Final match between South Zone and West Zone on Friday.

Jaiswal became the youngest Indian cricketer to score double centuries at the final of a first-class event. He surpassed star player Ajit Wadekar to do so.

Also Read: People are so worthless that they have nothing better to do: Bhuvneshwar’s wife Nupur bashes critics

Earlier in the match, West Zone took control of proceedings despite South’s 57-run first innings lead. At the end of the third day’s play, West Zone were 376 for 3, courtesy of Jaiswal’s unbeaten 209 off 244 balls that included 23 boundaries and three sixes.

West now have a lead of 319 runs and even if they declare at lunch on Day four, they will have five full sessions to force an outright victory although the track is getting easier for batting with no considerable wear and tear.

For South, it will be about batting out in the fourth innings and winning the trophy by virtue of the first innings lead.

Jaiswal had a 169-run third wicket stand with Shreyas Iyer (71) and another 58 for the unbroken fourth wicket with Sarfaraz Khan (30 batting).

It was a day that will be best remembered for the duel between two powerhouse performers in this year’s domestic cricket — left-handed opener Jaiswal and left-arm spinner Ravisrinivasan Sai Kishore.

While Jaiswal had failed in the first innings, he came out with a lot more positive intent in the second essay after South were dismissed for 327 with an addition of only nine runs to their overnight score of 318/7.

Had to give up one, so chose World Cup and Ashes...

Real Madrid vs PSG, UEFA Champions League: When And Where To...