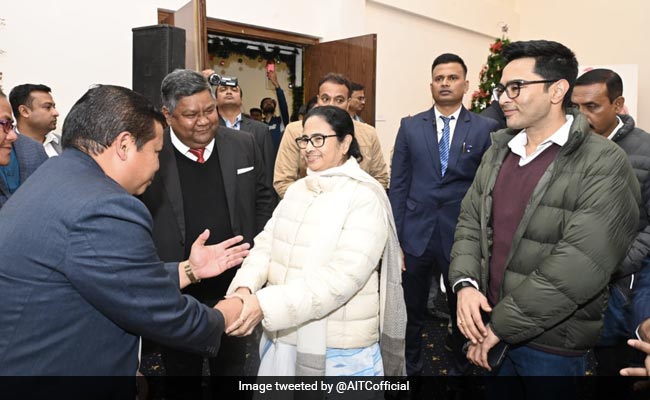 Trinamool has become the largest opposition party in Meghalaya.

Mamata Banerjee’s Trinamool Congress, contesting its maiden election in Meghalaya, announced a 10-point manifesto today and refuted the “outsider” tag bestowed on it yesterday by Chief Minister Conrad Sangma. Trinamool’s manifesto focusses not only on the contentious borer issue with Assam but also social security and healthcare for all, and 1000-rupee monthly allowance for women and the unemployed. The party has also promised 3 lakh jobs and job card for tourism sector professionals.

Unveiling the manifesto in Shillong, senior Trinamool leader and Mamata Banerjee’s nephew Abhishek Banerjee said the party will honour its pledges within 100 days of coming to power. “We will ensure a double-digit economy, double GDP growth, 4000 new MsMEs. Mining will revive with a scientific approach,” he said.

Trinamool has become the largest opposition party in the state following the defection of former Chief Minister Mukul Sangma and other Congress legislators. In November 2021, 12 of 17 Congress MLAs led by Mukul Sangma, a former chief minister, had joined Trinamool Congress.

If voted to power, Trinamool will immediately revoke the MoU Signed between Assam and the Meghalaya governments drawn up in presence of Union home minister Amit Shah last year for border dispute settlement, Mr Banerjee said. The party, he added, will put up check-posts and work towards securing the state borders.

“This manifesto is not a vision document with 10 random promises. These are pledges. Promises are often not kept, but when we make a pledge we ensure we keep it till the last drop of our blood. The mission of TMC is to turn the beautiful Meghalaya into a modern state,” he added.

At the press conference, Mr Banerjee also hit back at Chief Minister Conrad Sangma’s claim that the Trinamool is an outsider.

Conrad Sangma, who heads a six-party alliance including the BJP, had said yesterday that Trinamool does not have a base in Meghalaya and it will take them a long time to establish themselves and get people’s acceptance.

“During the Bengal elections, the Trinamool had taken a stand that the national parties like the Congress and the BJP don’t understand the issues of Bengal and are outsiders. Similarly, Trinamool is an outsider in Meghalaya right now,” he had said.

The assembly election in Meghalaya will be held on February 27. While most parties have welcomed the announcement made last week, the BJP has objected, saying the long gap between the announcement and the election date will give “ample opportunity to major parties to influence voters”.

The Hundred fixtures for 2023 released

Exclusive: It’s a process, not instant coffee, but someone should be accountable – Former India coach Harendra Singh on India’s Hockey World Cup fiasco...

7 killed in shooting in Half Moon Bay, California | CNN