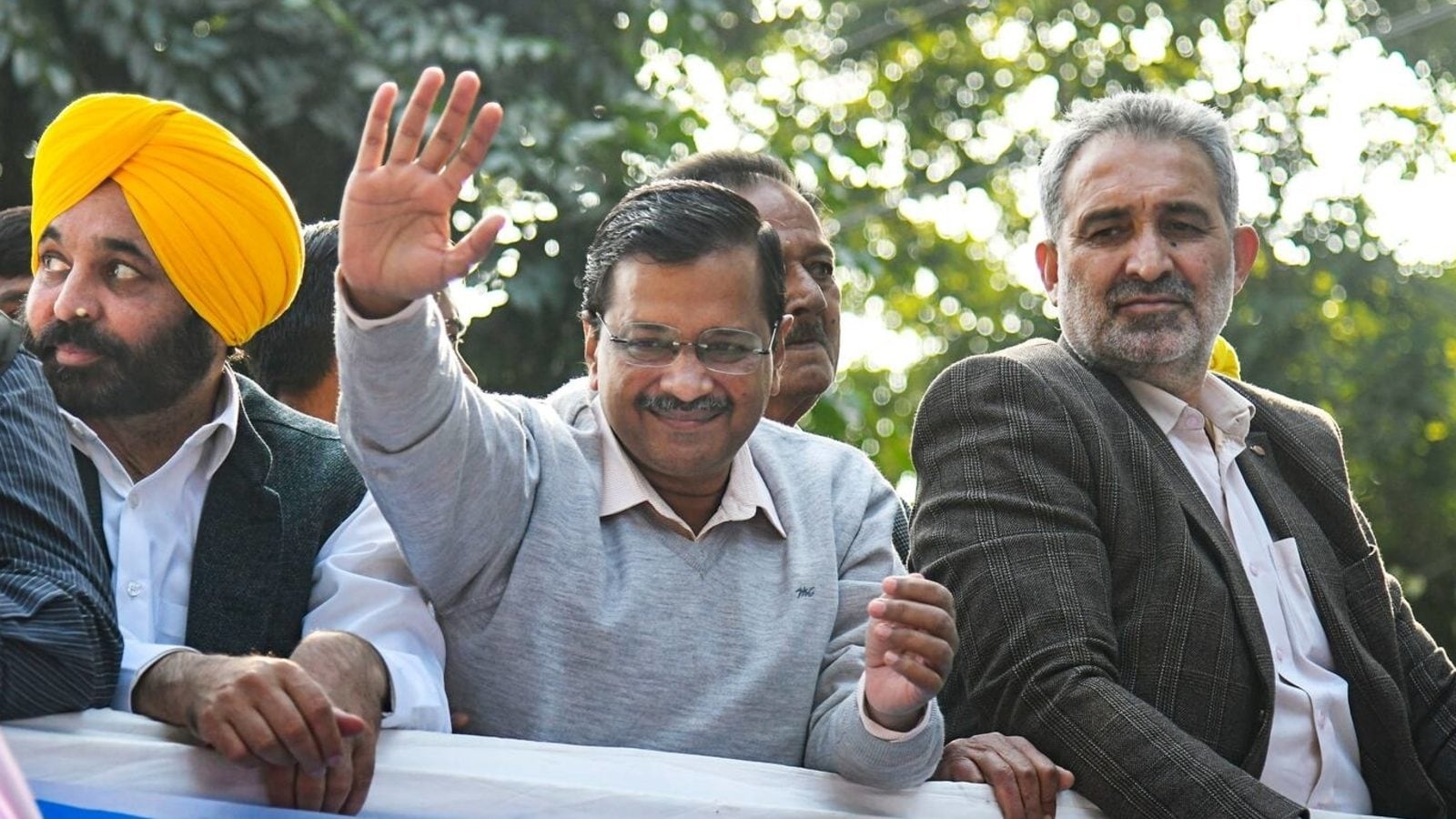 For the Aam Aadmi Party (AAP), 2022 promises to be the breakthrough year when it can finally cross the hump of being a ‘Delhi-centric’ regional outfit and spread its wings in the five election-bound states of Punjab, Goa, Uttarakhand, Uttar Pradesh and, later in the year, also Gujarat. If it manages to do that, and it seems likely, AAP would achieve what no other regional party has been able to do so far, be it the TMC, BJD, TDP, TRS or YSR Congress, which undeniably are very strong in their respective states led by charismatic leaders.

The style sheet of the campaign is the same: the electioneering in Punjab, Uttarakhand and Goa being led by AAP convenor Arvind Kejriwal, staggered release of manifesto promises or ‘Kejriwal’s guarantee’, robust ground campaign with party volunteers aiming to reach each household with ‘guarantee cards’, the ‘Delhi model of development’ with a heavy emphasis on health, education water, electricity and outreach towards women with a monthly allowance for all above the age of 18. AAP has also promised to create employment and provide an unemployment allowance for the youth. In Uttar Pradesh, the campaign is led by deputy chief minister Manish Sisodia and AAP Rajya Sabha member and UP incharge Sanjay Singh.

The party has its highest stakes in Punjab where it is the principal opposition party now and is looking at some real chances of forming the next government. The state is going to see a multi-cornered fight with the Akali-BSP, Congress, Amarinder Singh-Dhindsa faction of SAD-BJP, and the just-formed Sanyukt Samaj Morcha the other players.

Currently, Kejriwal is on a three-day trip to Punjab, quickly capitalising on the stunning debut performance of the AAP in the Chandigarh civic polls with a victory rally and deepening the party’s connection with the people. The results of the Chandigarh municipal elections recently have triggered an AAP wave across Punjab, said a beaming Kejriwal in Chandigarh, before making the newly elected councillors swear that they will remain true to the party and the people who voted for them. AAP has 14 councillors, the BJP 12, Congress 8 and the Akalis 1, and therefore who will take power in the Chandigarh municipality is still wide open. But the Chandigarh results are extremely significant for AAP as it is urban and Hindu-dominated, precisely the demographic where the party drew a near blank in its maiden assembly elections in 2017.

AAP leader Atishi believes that while the result of the Chandigarh municipal elections cannot be extrapolated to Punjab, it is definitely an indicator of the desire for change. “That is an indicator because Chandigarh is the seat of power of Haryana and Punjab. In Haryana, there is a BJP government. In Punjab, there is a Congress government. Yet, despite that, the people of Chandigarh have opted for AAP,” she said, pointing out that if people were angry with the BJP, it is not as if they have chosen the Congress as the alternative and the vote for AAP is a vote for change as the party represents a force for change: that governments can work, politicians can be clean. Wherever people feel that AAP is a viable alternative, they will vote for it, said Atishi.

AAP is often labelled by its opponents as a ‘Delhi party’ and that’s why the win in Chandigarh is significant. Candidly, Atishi said, “Had we won the municipal elections in Delhi, it would not have made that much of a difference in the upcoming state elections because after all, it is still within Delhi. While Chandigarh is outside, it is a totally different area. AAP contested for the first time and got the maximum number of seats, and that’s a big deal.”

Sanjay Kumar of the Centre for the Study of Developing Societies (CSDS) says the Chandigarh civic polls results are not an indicator of what is going to happen in Punjab. “But I am not saying that AAP is not going to do very well,” he said.

In fact, Dr Kumar believes that it is AAP, which is the front runner now and is within striking distance of forming the next government in Punjab. “I am going by ground reports. The Akalis have not been able to clean up their image, they have not been able to put up a fight. I don’t see them in the contest. I don’t see very positive opinion building in favour of the Akalis. The Congress is a divided house. With such a situation within the Congress, I do not see them in a serious electoral contest. Then we have another combination, Punjab Lok Congress of Captain Amarinder Singh with Dhinda’s SAD and BJP. I do not see them as a formidable alliance, which would give a close fight to the main contenders, whether it is the Congress or AAP. We also have a new formation of the farmers. They have also formed a party and would contest elections. So it is going to be a very multi-cornered contest. Given this messy situation, I am going to call it messy because voters are really going to get confused…In this messy situation, there will be a desire in the voter for change, i.e. kuch toh badlav hona chahiye (there should be some change). They would be a little disenchanted with what is happening within the Congress, even when you are a Congress sympathiser… kya karein , inko vote kaise dein (what should we do, how do we vote for them). All these indicators make me believe that it is AAP that is the front runner. And if there is a strong desire among voters for change, they would certainly look at AAP and not the parties floated by Amarinder Singh or by farmers, because they do not see them as potential players in winning elections,” he said. “They (AAP) did well in the last elections, by all standards they are the front runners. I think so, but I am not going by what has happened in the Chandigarh municipal polls.”

Historically, with just one exception, Punjab has never voted the same party back to power in consecutive elections. The exception was in 2012 when the incumbent government of Akalis-BJP was voted back to power. While seasoned political watchers may give an edge to AAP, the party itself is in a dilemma about its chief ministerial candidate. Kejriwal, the Delhi CM, has already announced that AAP’s chief ministerial face would be from Punjab and a Sikh. The expectation is that the announcement will come anytime after election dates are announced and the model code of conduct is imposed. However, the Congress choosing not to declare its chief ministerial face may force AAP to go back to the drawing board.

When asked about the difficulty in finding a chief ministerial face for Punjab, Atishi said, “We are in the process. Hopefully, we will be able to announce soon…You are looking for someone who is charismatic, who people can connect to, you are looking for someone who is a strong administrator…There are many characteristics that you are looking for. You may find that or you may not, one cannot say with certainty. As and when we naturally found people who were the right fit, we announced. Like in Uttarakhand, we announced quite early on.” When asked if AAP had not ruled out a woman as the possible chief ministerial face for Punjab, Atishi said, “It is possible. We have not ruled it out.”

As far as Goa is concerned, AAP is seeing it as a straight contest with the BJP, especially with 15 of the 17 Congress MLAs having quit the party, most joining the BJP. “The Congress is dying its own death in Goa,” said Atishi. The party has ruled out any pre-poll alliance with either the TMC or the MGP but is open to a post-poll tie-up. AAP has also announced that the chief ministerial face would be from the Bhandari community while the deputy CM face would be from the Catholic community.

Sanjay Kumar of CSDS believes that in Goa, the BJP is the front runner as in smaller states defections hurt the party more than in bigger states. However, he believes that it will be the Congress that will be the number two party. Speaking about Goa, he said, “It is very messy, extremely fragmented. I feel the BJP will benefit from this fragmentation of votes. In the states where there is a fragmentation of votes against the BJP, it seems to benefit. And also look at the mood: a large number of Congress MLAs have joined the BJP. The Trinamool Congress is in the fray, AAP is in the fray, so the anti-BJP vote is getting split.” In Uttarakhand, Kumar says AAP will play the spoiler in a sizeable number of seats.

While chief minister Arvind Kejriwal is scheduled to hold a rally in Lucknow on January 2, party insiders are quite realistic about their prospects in Uttar Pradesh. Alliance talks with the Samajwadi Party have proven to be stillborn. AAP has decided to contest all seats on its own but is focusing only on a few.

AAP chief Arvind Kejriwal is clearly pitching himself as an alternative on the national stage. The party trying to storm the BJP’s ideological fortress as well as Prime Minister Narendra Modi’s bastion of Gujarat. When the BJP had just two MPs in Parliament, it targeted the grand old party INC with the charge of pseudo-secularism. And now the new kid on the block, AAP, with just 4 lawmakers in Parliament, is levelling the charge of what it sees as “false or pseudo-Hinduism” against the BJP.

So strident is the hammering of this note by AAP, that it seems what it is trying to convey is not that it too is Hindu-centric and can provide a safe home for voters who are attracted towards the BJP but that AAP is the true upholder of Hinduism. In the sheer noise though, the distinction between ‘Hinduism and ‘Hindutva’ has been lost, Kejriwal also never misses a chance to underline the need for respecting all religions and equal space for all in the constitutional framework.

2022 will be the year of expansion for AAP. Atishi says that AAP has shown a model that works and now wants to take this model of governance to other parts of the country also. And the biggest hope for 2022 is having governments at least in two states outside Delhi. Without getting into the technicalities of what actually constitutes a national party, Sanjay Kumar of CSDS says that compared to other regional parties, AAP would stake a bigger claim for expansion at the national level, because this is the only party that is the ruling party in one state and very, very strong in another state; there is no other regional party that is strong in two states.

Rayner in Chester: Sunak failed in first test as leader

Congress is Only Party with System of Electing President, Says Jairam...