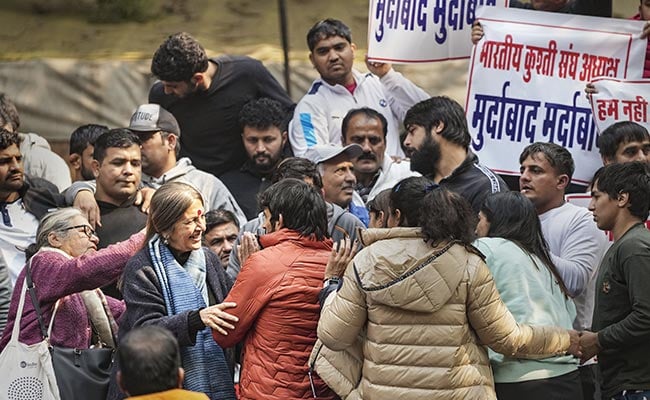 Brinda Karat went to the protest in Delhi’s Jantar Mantar on Thursday.

Left leader Brinda Karat was requested “with folded hands” to leave the stage at Delhi’s Jantar Mantar on Thursday where around 200 wrestlers are on protest over accusations against the federation chief and several coaches of sexually harassing multiple athletes.

“Neeche chale jaaiye please (Please get down)… We request you, madam, please don’t make this political. It’s athletes’ protest,” Tokyo Olympics bronze medallist Bajrang Punia told Ms Karat when she arrived at the venue, on the second day of the protest.

#WATCH | CPI(M) leader Brinda Karat asked to step down from the stage during wrestlers’ protest against WFI at Jantar Mantar in Delhi. pic.twitter.com/sw8WMTdjsk

The Communist Party of India (Marxist) MP later told NDTV, “We are in the fight against any type of sexual harassment, anything which demeans any section of women. So, we are here to demand that the government take strong action.”

“It is extremely unfortunate that they (wrestlers) should be forced to come here and sit on dharna. Any government of any colour should ensure that any complaint by any woman should be acted on and till the inquiry comes to a conclusion, the person accused should be removed,” she said.

Ms Karat reached Jantar Mantar around the same time as Olympian Babita Phogat, who met a group of wrestlers with “a message from the government”. A decorated former wrestler herself, Ms Phogat is now a member of the ruling BJP and part of the Haryana government.

“I’m a wrestler first. The BJP government is with the wrestlers. I will make sure that action is taken today itself. I’m a wrestler, and I’m in the government as well, so it is my responsibility to mediate. I have heard instances of abuse in my career as well. There is no smoke without fire. These voices are important,” she said.

The country’s sports ministry has already asked the Wrestling Federation of India (WFI) to respond to the allegations within 72 hours. WFI President Brij Bhushan Charan Singh, who is also a BJP MP, has refuted the charges.

The protest began on Wednesday with triple Commonwealth Games gold medallist Vinesh Phogat, one of India’s most decorated women wrestlers, went public with the charges. Ms Phogat said she never faced such exploitation herself, but claimed many wrestlers were intimidated from coming forward because of their humble origins.

The 28-year-old was backed by several other top wrestlers including Bajrang Punia and Sakshi Malik, another Olympic bronze medallist.

Transgender rapist Isla Bryson to be moved from women’s prison

Serena Williams says she is ‘evolving away’ from game with retirement...