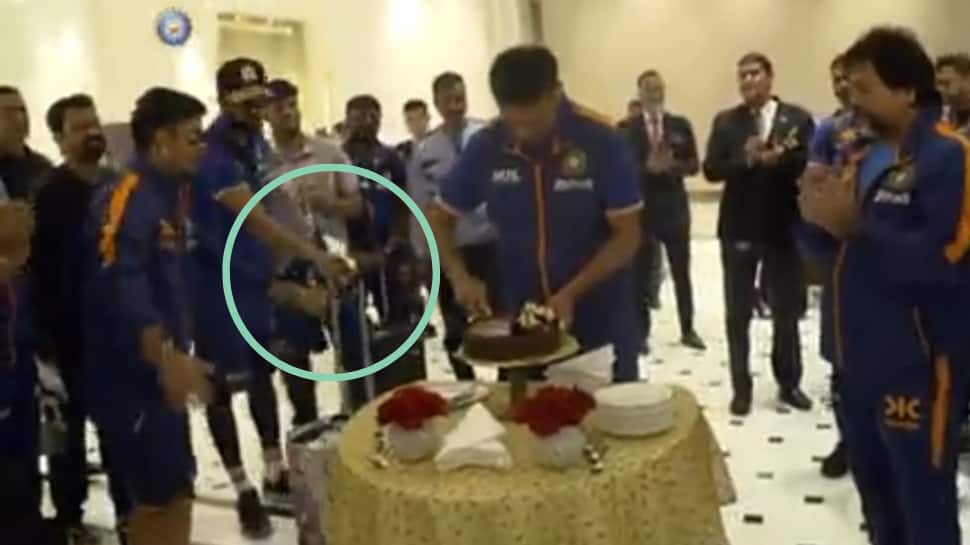 Indian cricketer team head coach and former captain Rahul Dravid celebrated his 50th birthday with the Team India members. A small cake cutting ritual also took place upon team’s landing in Kolkata. The Indian team checked into the hotel in Kolkata where a cake was waiting for Dravid. This is the same Kolkata where Dravid stitched a record partnership with VVS Laxman that helped India beat Australia in a Test match at Kolkata, some 23 years ago. Dravid cut the cake with players and support staff clapping and singing the birthday song but Ishan Kishan’s clapping could have ruined the moment for Dravid.

The BCCI shared the video of Dravid cutting the cake and while he did that, Ishan’s hand hit the handle of the suitcase kept beside him and it started to go towards the table on which the cake was kept and had Vikram Rathour, the team’s batting coach, not stopped it, it could have crashed into the table, toppling the cake.

India will play Sri Lanka in the 2nd ODI at Eden Gardens in Kolkata on Thursday (January 12). Team India are already 1-0 ahead in the 3-match series. India defeated Sri Lanka in the 1st ODI by 67 runs to go 1-0 up in the series. The win was set up by captain Rohit Sharma and former skipper Virat Kohli, who slammed a hundred in quick time. Their good knocks coupled with contributions from others took India to 373 for 7 in 50 overs.

Chasing thr target, the Lankans fell short by 67 runs. Dasun Shanaka, Sri Lanka’s skipper, stroked an unbeaten 108 off 88 balls but it was not enough to take the side home as others, apart from him and Pathum Nissanka who smashed 72, no one really stepped up and made any significant contribution with the bat.