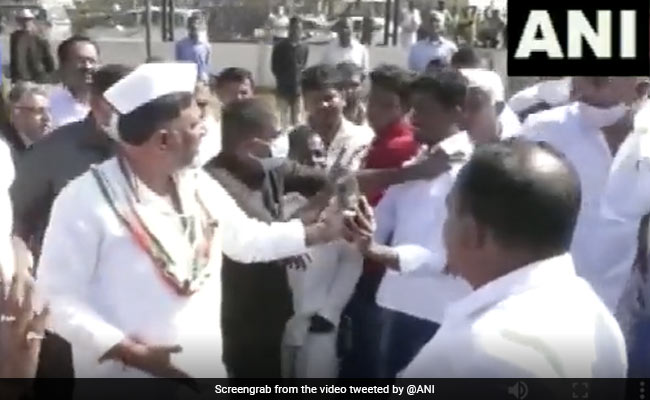 public today when a man tried to take a selfie with him. The 58-year-old leader – often called the party’s troubleshooter in the southern state – also referred to former Prime Minister Rajiv Gandhi’s assassination as he snatched the mobile phone from the man, drawing criticism.

“We don’t know what one might have in hand. You know what happened to Rajiv Gandhi. Sometimes, human anger and emotions come out, nothing wrong in that,” the 59-year-old leader was quoted as saying by news agency ANI.

In the video, an angry Mr Shivakumar can be seen standing in the midst of a crowd in Mandya, about 100 km from the state capital Bengaluru. When the man approaches him, he snatches the phone as his bodyguards promptly intervene.

The clip drew criticism on social media as many on Twitter questioned the reference to Rajiv Gandhi while others said he should not have behaved that way. There were some who defended him too.

“We don’t know what one might have in hand. You know what happened to Rajiv Gandhi. Sometimes, human anger & emotions come out, nothing wrong in that,” the leader says pic.twitter.com/cMjh7LuXbp

This is not the first time that the Karnataka Congress leader’s aggression has been caught on camera.

In July, he slapped a party worker who was trying to put his arm around the leader’s shoulders.

Visibly ill at ease, DK Shivakumar questioned the man’s authority and slapped him.

In another incident, during an election campaign in Ballari in 2018, he slapped at the hand of one of his supporters who wanted to take a selfie with him.

WhatsApp is adding this new functionality to disappearing messages feature