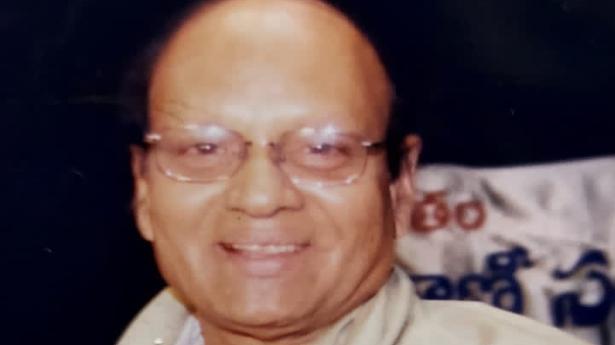 A contributor to The Hindu for over five decades, the writer and art critic set a precedent in film and art reviews

A contributor to The Hindu for over five decades, the writer and art critic set a precedent in film and art reviews

In the 1970s and 80s, the evenings would be ushered in on the radio by this voice.  A popular newsreader on the radio for two decades, journalist and a pioneering art and film critic in the Telugu states, Gudipoodi Srihari passed away on July 5 at the age of 88 in Hyderabad.

Born on September 8, 1934, Gudipoodi did his B.Sc., B.Ed. from Andhra University and a Postgraduate in Math from Delhi University. He taught Maths and Physics in a higher secondary school of the Delhi government for a few years before he shifted to Hyderabad and started his journalistic career. He chose to remain a freelance writer and maintained ethical standards throughout his career.

His column Harivillu, a commentary on social issues in Eenadu, was published for 25 years, making him a household name among Telugu readers. His film reviews were much awaited and his interviews with actors, analysis of films and industry developments were respected and widely read. Gudipoodi’s association with The Hindu began in 1968, with the launch of the Friday Review supplement in the then unified Andhra Pradesh; he strengthened it with his unbiased coverage of dance, music, theatre, art and cinema. Generations of vocalists, dancers, musicians and theatre artists owe it to Gudipoodi for his critical feedback and support he lent in shaping their artistic careers.

Gudipoodi’s heart-warming article on Surabhi Theatre, in the Sunday Magazine of The Hindu, caught the attention of the Central Sahitya Natak Akademi who released funds to the group for their survival.

A critic with a wry sense of humour, he was very observant yet kept his pen well within the invisible line of respectability — that was the Srihari garu I knew. He never allowed his humorous, caustic comments to reflect on the paper. Those were for us who shared the field. His was always a positive assessment of an artiste and performance. For this, he was well respected and popular too. A veteran in the field, Srihari garu will be long remembered for his innumerable contributions.

Shocked to hear of the passing on of Gudipoodi Srihari garu. I have known him for decades. He would attend all our performances and take notes. His reviews in The Hindu were much sought after and precious for us. I fondly remember him also publishing a cultural monthly called Pallavi and was so honoured when he put me on the cover many years ago. It is the end of an era.

Gudipoodi Srihari was an efficacious media journalist who had in-depth knowledge about music and dance. With his decades of experience, his articles were eagerly awaited by the senior dancers and he was equally instrumental in encouraging several upcoming artistes. His demise is a great loss to the art fraternity.

I have had a 45-year-long association with Gudipoodi Srihari garu. He wrote my very first review in 1976 for my Rangapravesam. I am happy that he was a big part of my dance journey. A giant from that era of journalism which valued integrity above all else, he was a wonderful dance critic with a positive approach. He was unabashed in his modesty and had no hesitation in calling artistes if he had any doubts to clarify. The entire artistes community will sure miss him.

Kartik Aaryan’s ‘Dhamaka’ to be out on Netflix on November 19...