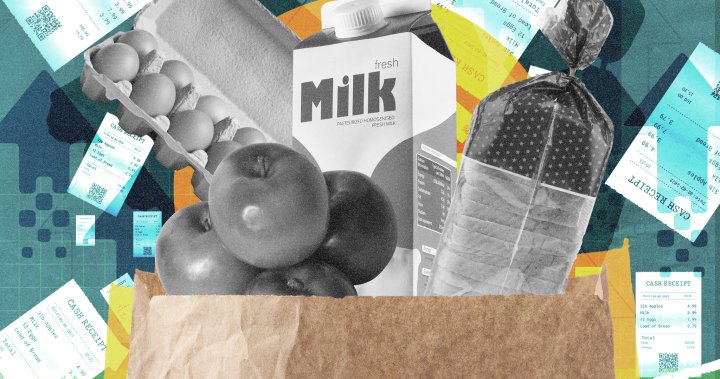 As Canadians continue to feel the pressure of inflation, groceries are one area many are hoping prices will ease soon.

Global News went to the grocery store to see how rising prices are impacting families trying to make ends meet, as part of its ongoing Out of Pocket series.

The prices for some similar, but not identical, ‘pantry staples’ were compared in four stores in different parts of Ontario: Toronto, Barrie, Owen Sound and Sioux Lookout.

While the prices for the items – eggs, milk, bread and apples — fluctuated marginally across each grocer and location, some items were considerably more expensive in rural areas.

But why were prices so different? Here’s what experts say.

Transporting added to cost for some: expert

Moshe Lander, an economist and professor at Concordia University, said the disconnect between food prices in urban and rural settings is “not a new phenomenon.”

In Canada, grocery prices include the cost of both producing the food and transporting it, Lander said.

“When you see gas prices rapidly rising, then rapidly falling and yo-yoing up and down these days, that’s going to be embedded in the price of food as well,” he explained. “When gasoline prices take off, even if there had been a stable supply of food, you’d still see some elements of food price inflation, because it would be picking up the embedded cost of transporting it.”

2:13Out of pocket: Inflation forces B.C. mother to give up retirement saving

Global News also looked at the price of similar items in Sioux Lookout, which is an 18-hour drive north of Toronto, or a three-and-a-half-hour flight.

Budgeting ‘out the window’ — How inflation is putting the squeeze on a B.C. single mom

“Grocers will take note of our visits, what we buy, what we don’t buy, when we buy all these things, and it results in data that they use to analyze and anticipate our next moves,” he explained.

“That’s how you run a much more effective grocery chain,” Charlebois said. “You reduce waste, essentially, because you’re able to balance supply and demand in real-time almost, (and) that’s the ultimate goal for grocers.”

Grocers will also determine which items are sold, and their prices, based on the average income of an area.

If grocers know that the average income of a particular location is high, items may be priced just a bit higher, Charlebois explained.

Competition is another large factor when it comes to food pricing.


In rural locations where there aren’t as many stores, grocers may increase the prices of some items because they know consumers have fewer options.

“For example, if (a grocer) opens up a store in say, rural Saskatchewan, they may actually draw more business by keeping prices down for a while,” he said. “After a year they’ll actually raise prices as they establish their clientele – so that also plays a role.”

Ultimately, Charlebois said managing the prices for 25,000 or so products is a “complex process” for grocers.

“You will have different strategies, and that’s why sometimes people wonder why the same product is priced differently from one store to another,” he said. “But absolutely, servicing a remotely located store is going to cost more.”

Is inflation making food price disparity between locations even worse? Lander said it depends on how you look at it.

He provided a hypothetical example: Imagine an item costs $1 in Toronto, and the price for the exact same item in Sudbury, Ont., is $2.

If the prices for both increase by 50 per cent, the item would now cost $1.50 in Toronto and $3 in Sudbury.

“The Sudbury price is still double the Toronto price, but in terms of absolute dollars, it was $1 more, now it’s $1.50 more expensive,” he explained. “So has inflation exacerbated the problem? Well, in dollar terms, yeah, in percentage terms, no.”

‘Minding pennies’ — High inflation is having big impact on a N.S. business owner

“Aggregate that over hundreds and hundreds of goods at a variety of different grocery stores spread over a whole area, (and) in general, what you’re finding is that the general proportion hasn’t changed much, but in absolute dollar terms, it has.”

Lander said amid high inflation it’s an even bigger problem.

2:04Bank of Canada hikes key rate in bid to tamp down inflation

The latest Canada Food Price report released in December said the price of food increased by 10.3 per cent in Canada in 2022.

According to the report, the average family of four spent $15,222.80 on food last year.

The report suggests that food prices will increase by another five to seven per cent on average this year, which will add hundreds more dollars to the average family’s yearly food expenditure.

Charlebois said those looking to save money on groceries should familiarize themselves with “pricing dynamics.”

“You have to give yourself some options,” Charlebois said, saying consumers should shop around and make substitutions where necessary.

“If you go to the grocery store and you look at the price, if the price is too high, walk away,” he said. “Discipline also really helps and so you need to have some flexibility.”

Lander echoed Charlebois’s remarks, saying Canadian families that are “flexible” and learn to prioritize when and how to spend their money will be “much better positioned to reduce a lot of pressure” until inflation eases.

NI strikes: Ambulance staff and nurses among 25,000 to walk out

US on Mike Pompeo’s Book That Claims India, Pak Were on Brink of Nuclear War

Some of California’s beloved, storm-struck parks and forests remain closed

Variety of foster families needed to help children in Montreal –...