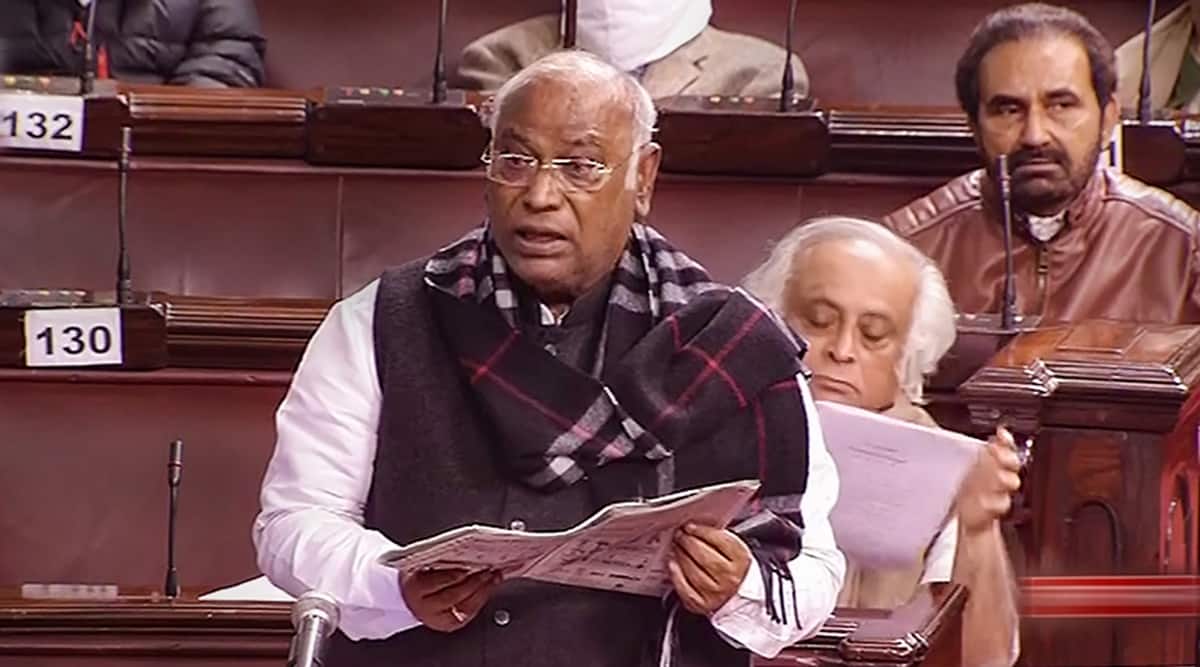 Hours before the UP government ordered a probe into The Indian Express report on how MLAs, Mayor and relatives of top bureaucrats acquired land within a 5-km radius of the proposed Ram temple site in Ayodhya, the Opposition ratcheted up the pressure, demanding an investigation into this “matter of serious concern”.

As soon as Rajya Sabha met Wednesday, Kharge raised the matter, holding a copy of The Indian Express. “It is a very important issue. You might have seen in today’s Indian Express which carried a story saying MLAs and Mayor, relatives of Commissioner, SDM, DIG, officials buy land.”

However, his request to raise the issue was turned down by Chairman M Venkaiah Naidu who said a newspaper cannot be read out and prior notice needs to be given. Kharge persisted and asked the Chairman to “take note” of the issue.

“It is a very important newspaper,” he said. At this, Naidu said: “Very important. I also like that newspaper like you and many other people. But the procedure in the House is that newspapers cannot be read. You have to give notice.”

Addressing a press conference later, Kharge said he wanted to raise the issue as it was important. He said it has become a practice now to adjourn the House as soon as the Opposition tries to raise an issue. “Today also… suddenly… I was raising the issue of Ayodhya… when I read the paper in the morning… There are at least 14 names in it… 14 people which include MLA, Mayor, Deputy Commissioner, SDM, divisional commissioner… their relatives. We wanted to raise the issue… I said I want to raise a big, important issue. It concerns Ayodhya where such a big temple is being built for Ram… took a dip in the Ganga… sab ho gaya… but what is happening in Ayodhya. How much land has been grabbed, that too of Scheduled Castes, the poor… and big people there… because real estate prices are increasing, so they are buying land. I wanted to raise the issue. The moment I got up… Vande Mataram was played,” he said.

Rahul Gandhi, in a Twitter post, said: “Hindu traverses the path of truth. Hindutvawadi loots under the guise of religion.”

Addressing a press conference, Congress communication department head Randeep Surjewala said: “The sensational revelation which has come to light is a matter of serious concern. In Ayodhya, in and around the temple, BJP MLAs, BJP Mayor… and senior bureaucrats of Adityanath government are amassing wealth,” he said, and read out names of 14 cases reported by The Indian Express.

“That is not all. Our Dalit brothers too have not been spared… Lord Ram is a symbol of faith… he is truth, love… but in Ram’s Ayodhya, BJP leaders are looting land openly… our Prime Minister Modi is silent. He is not even uttering a word… We would like to know when will he order a probe into this land loot. The Prime Minister should come before the country and clarify his position,” he said.

AAP MP Sanjay Singh said BJP leaders and officers are “committing land fraud” in Ayodhya. He demanded setting up of an SIT, under the supervision of the High Court or the Supreme Court, to investigate the land deals.

“This scam is shameful. Every person has contributed for the construction of the Ram temple. Women have gone to the extent of selling their jewellery because of their faith and those in power have misused their trust and faith,” he said.

CPM general secretary Yechury said: “This should be properly investigated and looked into as the people mentioned hold high official positions. This report suggests that there is a strong element of land speculation.”

‘I wasn’t going to give up’: A cruise ship passenger who fell overboard recounts harrowing experience

“Russian Attacks Have Left Children Dead”: US On Ukraine Conflict

Messages of support from across football for Pele