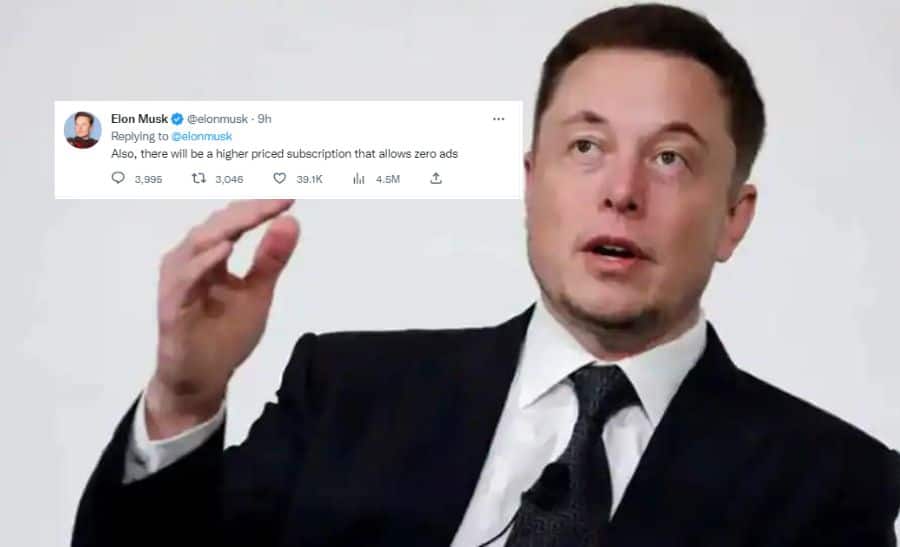 New Delhi: Twitter head Elon Musk has said in a Twitter thread that the platform is planning to bring a higher priced subscription with zero-ads in the coming days. It will provide rich and smooth user experience as Musk said that “ads are too frequent on Twitter and too big”. The microblogging site is taking steps to address both the problem.

Ads are too frequent on Twitter and too big. Taking steps to address both in coming weeks.
— Elon Musk (@elonmusk) January 21, 2023

Replying to that thread, a Twitter user Alessandro Perilli said that he hadn’t seen Instagram, an ad every 3 pictures. He called it complete garbage experience and long stopped using it. Perilli also mentioned that if Musk made ads less intrusive there and offered features that appealed visual communities, there were millions of users over there ready to migrate.

In a reply to that user, Musk said that’s the plan.

Another user Joe Tate Sr said that advertising as a small business on Twitter was just difficult. He gave up with his business. Tough he hoped they would make it easier.

Musk announced in December that Twitter’s Basic blue tick will have half the number of advertisements and that it will offer a higher tier with no advertisements by 2023.

Twitter will translate and recommend tweets from other languages and countries

Tech billionaire and Twitter head Elon Musk has hinted to bring a new update in Twitter soon that will recommend users amazing tweets from people in other countries and cultures after translating them. It will open a treasure of hidden and untapped tweets in the micoblogging site for users that might be useful for them.

Elon Musk reiterated in the thread that tweets would be translated before being recommended. He also mentioned that there are epic tweets in other countries every day (Japan especially).

Twitter earns nearly 90% of its revenue from selling digital ads and it has seen a massive drop in the last few months.

Samsung to unveil Galaxy M13 series in India on July 14