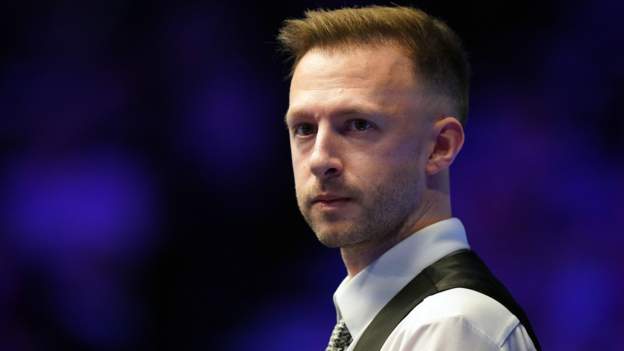 Former champion Judd Trump came from behind to beat Barry Hawkins 6-5 and reach the semi-finals of the Masters.

Both players made numerous errors in a scrappy contest, but it was Trump who held himself together to progress.

The pair shared a century apiece and had traded frames at 4-4, Hawkins took the next but Trump’s ton forced a decider before he claimed the victory.

Two more former winners are in action in the evening session, with Shaun Murphy taking on Stuart Bingham.

Hawkins stroked in 110 and Trump made 69 as the first four frames were shared, but the out-of-sorts 2019 champion was punished as he fell 4-3 behind.

Trump, 33, responded by scoring a sublime 143 – a joint-highest break of the tournament – but 43-year-old Hawkins moved one frame away from victory, helped by a fluked red into the middle pocket.

Trump refused to be beaten and dug in with a cool 107 to take the match all the way, sealing progression with a nerveless 81 break.

A delighted Trump told BBC Two: “I needed to go 4-3 down with a bit of pressure to come alive. The crowd is so good, it is amazing to be involved here, the louder the crowd gets the more I want to play well.

“Both games I have felt so bad and nervous beforehand, that is the only reason I am not playing well – nerves. I seemed to relax, get control and felt my best towards the end.”

Seven-time world champion Stephen Hendry added: “A sign of a true great and a world class player is to produce the best snooker when you have your back against the wall. The frames he won at the end of the match were magnificent.”