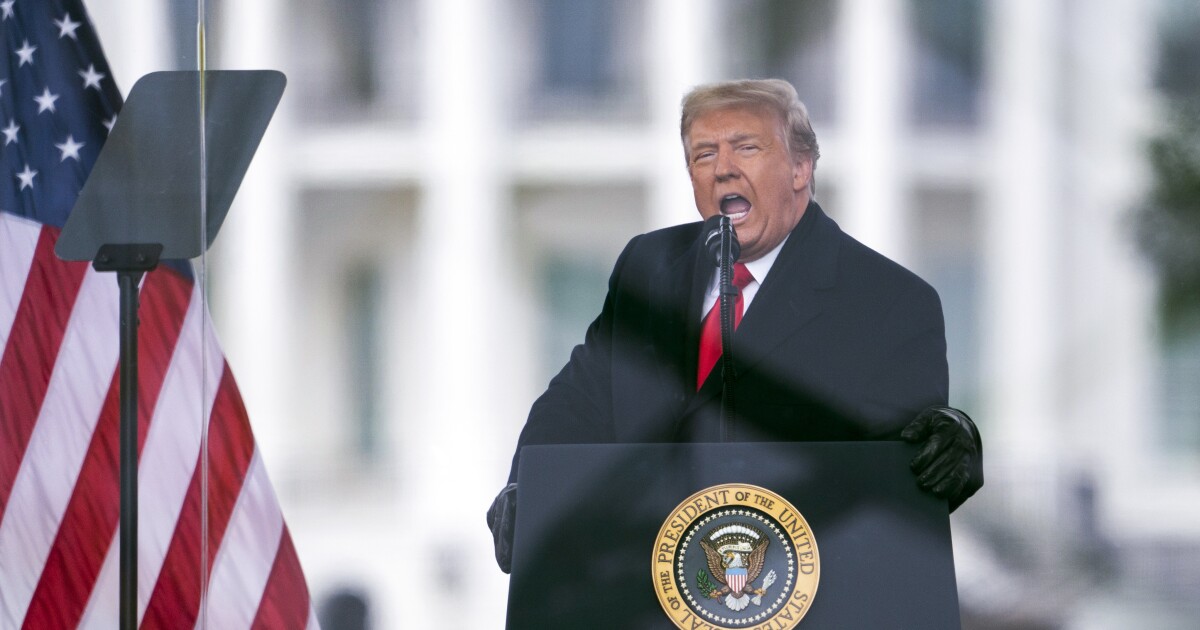 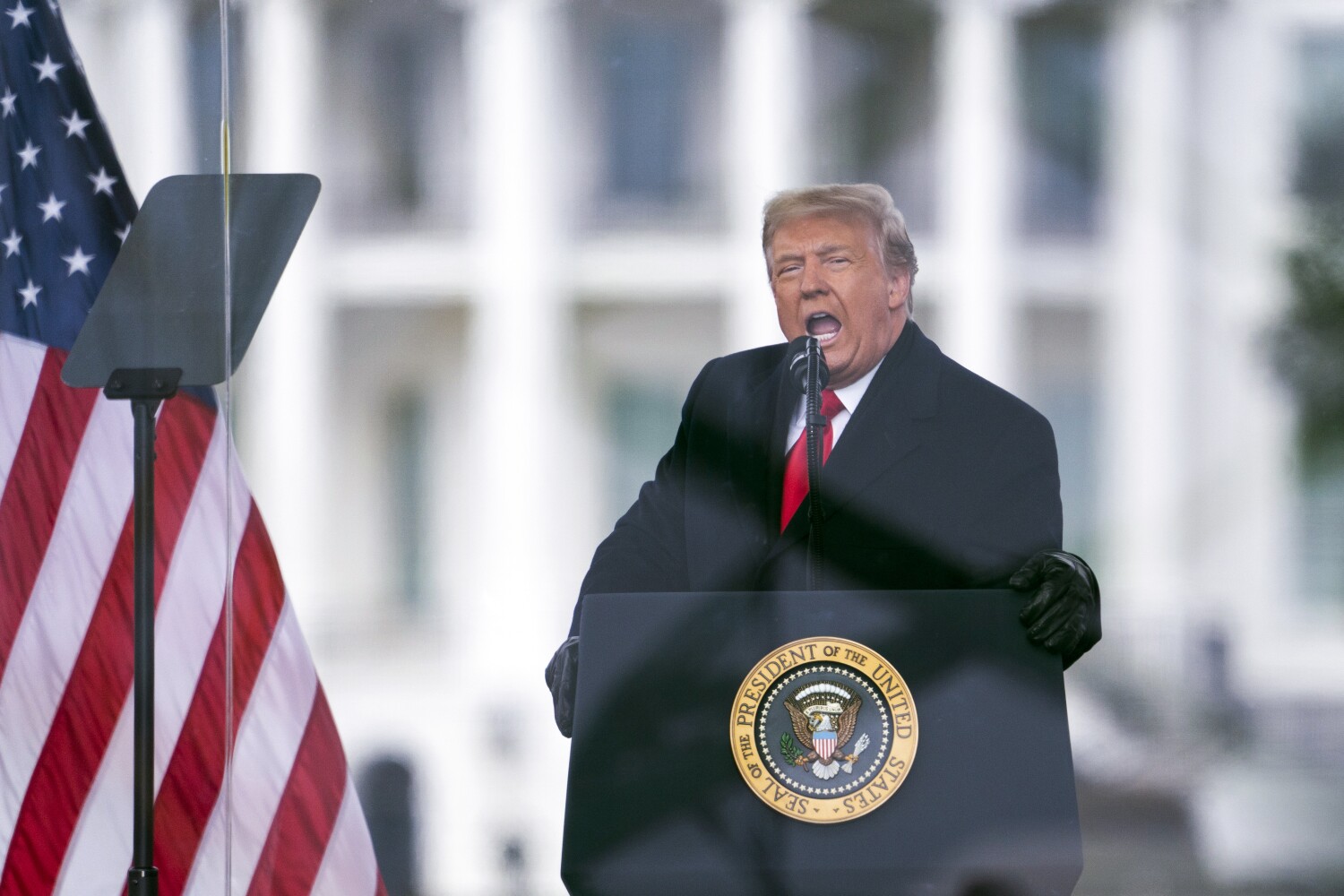 Former President Trump asked the Supreme Court on Thursday to shield his White House files from being turned over to the House committee investigating the Jan. 6 attack on the Capitol.

At issue is whether the former president may invoke executive privilege to protect the privacy of his records, even after President Biden had approved their release.

While the legal dispute involves the powers of the president — and in this instance, an ex-president — it arises amid a partisan battle over Trump’s role in inciting an attack on Congress as lawmakers met to certify Biden’s victory over Trump.

In appealing an earlier ruling that rejected Trump’s executive privilege claims, the former president’s lawyers urged the Supreme Court to “prevent two politically aligned branches of government from wielding unfettered power to undermine the Presidency and our Republic.” They are asking the court to block release of any documents and grant review of Trump’s appeal.

A federal judge and a three-judge panel of the U.S. Court of Appeals for the D.C. Circuit rejected Trump’s executive privilege claims in recent weeks.

“Presidents are not kings, and the plaintiff is not president,” wrote U.S. District Judge Tanya Chutkan, an Obama appointee, in a November ruling that turned aside Trump’s claims.

From the start, Trump’s lawyers made clear they were aiming their appeal at the more conservative high court with its three Trump appointees. It is not clear how quickly the Supreme Court will act on the appeal. It is likely to ask the Biden administration for a response before issuing a ruling.

The case began in August when the House committee under Democratic control asked the National Archives, which has custody of presidential records, for “all documents and communications related to efforts, plans, or proposals to contest the 2020 Presidential election results” from April 2020 to January 2021.

Committee chairman Rep. Bennie Thompson (D-Miss.) also requested “documents, communications, videos, photographs and other media generated within the White House on Jan. 6, 2021 that relate to the rally on the Ellipse, the march to the Capitol, the violence at the Capitol, and the activities of President Trump and other high-level Executive Branch officials that day,” the appeals court noted.

Under the Presidential Records Act, Trump was notified of the request along with President Biden.

In response, Biden said asserting executive privilege to shield these documents was “not in the best interests of the United States,” given the “unique and extraordinary circumstances.”

In a letter to David Ferriero, the archivist of the United States, White House counsel Dana Remus wrote that “the constitutional protections of executive privilege should not be used to shield, from Congress or the public, information that reflects a clear and apparent effort to subvert the Constitution itself.”

In this instance, she added, Congress has a “compelling need” to investigate “an unprecedented effort to obstruct the peaceful transfer of power” and the “most serious attack on the operations of he federal government since the Civil War.”

Lawyers for Trump filed suit in October seeking to block the release. They said the records were protected by presidential privilege, and Congress had no “legitimate legislative purpose” in obtaining them.

The Constitution does not say Congress has a power to investigate, nor does it give the president an “executive privilege” to refuse requests for information. But both powers have been asserted through most of American history and upheld by the courts.

Presidents and their Cabinet secretaries frequently resist broad demands for information from congressional committees. But the two sides often work out agreements to turn over a significant amount of what was requested. Rarely are these disputes resolved in court.

She noted the Supreme Court left open the possibility in 1977 that former President Nixon could still assert some claims of “confidentiality” in his White House records. But in this case, the balance of interests clearly favors Congress and its need for information, wrote Millett, an Obama appointee who was joined in her ruling by two other Democratic appointees.

“Here, the House of Representatives is investigating the single most deadly attack on the Capitol by domestic forces in the history of the United States. Lives were lost; blood was shed; portions of the Capitol building were badly damaged; and the lives of members of the House and Senate, as well as aides, staffers, and others who were working in the building, were endangered,” she wrote.

Moreover, “there is a direct linkage between the former President and the events of the day,” she added.

Her opinion recounted how the insurrection began. Trump rallied his supporters at the Ellipse shortly before noon on Jan. 6, and repeated his claims the election was “rigged” and “stolen,” she wrote. He told the crowd “we’re going to to walk down Pennsylvania Avenue” and “demand that Congress do the right thing and only count the electors who have been lawfully slated.” He warned that “you’ll never take back our country with weakness” and declared “[w]e fight like hell and if you don’t fight like hell, you’re not going to have a country anymore.”

Early in his hourlong address, Trump said he expected his supporters would march “peacefully and patriotically” to the Capitol to “make your voices heard.” House Democrats noted during impeachment proceedings he used the word “fight” or “fighting” 20 times.

When the speech concluded, Judge Millett wrote, “a large crowd of President Trump’s supporters — including some armed with weapons and wearing full tactical gear — marched to the Capitol and violently broke into the building to try and prevent Congress’s certification of the election results.”