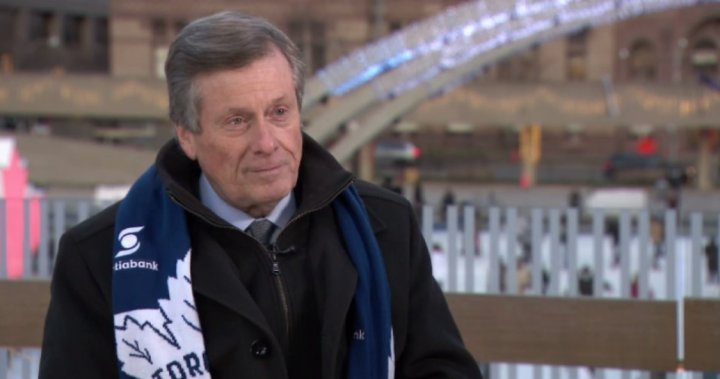 After a year fraught with challenges of pandemic proportions, the mayor of Canada’s largest city is asking its residents to remain hopeful and stay the course.

Sitting down with Global News recently for a year-end retrospective, John Tory says though 2021 has been tough, the city is in a much better position than it was this time last year.

In December 2020, Canada was preparing to receive its first shipments of Pfizer’s mRNA COVID-19 vaccine.

“Businesses, by and large at this time last year, were just closed,” he recalled. “Everything was closed.”

However, Tory says he sees a path forward, and crucial to that is getting people vaccinated.

According to City of Toronto data, well over 5.5 million doses of vaccines have been administered.

Tory officially declared an emergency in Toronto on March 23, 2020, in response to the outbreak of the novel coronavirus, which was then still largely shrouded in unknowns.

While many grapple with pandemic fatigue, new restrictions continue to be announced across the country. In Ontario, that has meant more limitations on industries that have already been dealt a significant blow.

When it comes to small businesses, Tory continues to encourage people across the city to stay close to home for their food and retail needs.

“Do everything local, because those are the businesses on the main streets, in the underground — here in downtown — that have really struggled,” he said.

“They’re the ones that don’t have a huge bank account to rely on, or a huge backstop of any kind.”

On Dec. 17, the city announced it had fully reactivated its Emergency Operations Centre (EOC) as a result of a projected surge in COVID-19 cases related to the Omicron variant.

Tory told Global News their efforts have been concentrated on ramping up the delivery of vaccines to residents, and the city has teamed up with local health partners to do it.

He said those partners include hospitals, community health organizations, pharmacies and doctors’ offices.

While Toronto’s mayor was front and centre in the fight against COVID-19, he, along with the city and police, faced significant criticism over the handling of encampment evictions over the summer.

Global News asked Tory whether he continues to stand behind the actions taken on the ground.

“We had 20,000 visits to people experiencing homelessness in public parks, to say please come in,” he responded.

“We will offer you different options for indoor housing, but they did reach a point — and the decision on that wasn’t mine as mayor — the police make their own decisions about when to move to deal with situations, and same with the bylaw officials.”

In the fall, Tory made headlines over his longstanding relationship with the Rogers family, as they moved to settle a boardroom dispute which had spilled over into the public realm.

He faced criticism that his role on the family control trust was unethical.

Tory, however, said he has no regrets continuing on in that capacity, saying he declared his position to the integrity commissioner prior to being elected mayor in 2014.

“I made a commitment, as he was reaching the end of his life, Mr. [Ted] Rogers, that I would try to watch over and help his family in any way that I could,” he replied.

“This is a big organization that involves tens of thousands of people in the city, who work for that organization and need to have secure jobs.”

Tory said at the end of the day, his first commitment is to his job as Toronto’s mayor. Now on the cusp of a new year, one of his next big decisions will be whether to run again.