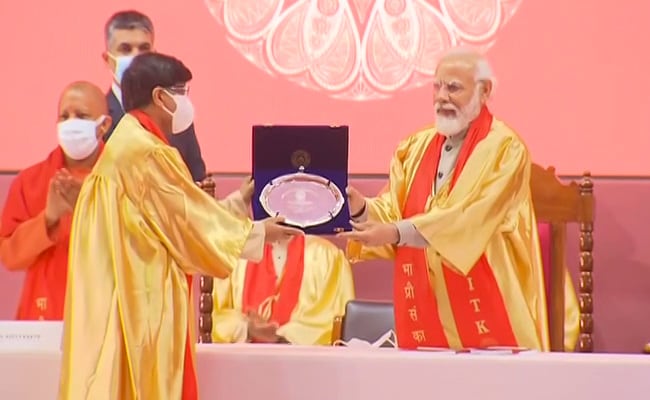 Lauding the contribution of students, Prime Minister Narendra Modi on Tuesday said that the world of technology is getting priceless gifts from the Indian Institutes of Technology (IIT) Kanpur.

Addressing the 54th convocation ceremony of IIT Kanpur, the Prime Minister said, “Today is a day of double happiness for Kanpur. On one hand, Kanpur is getting a metro rail facility and on the other hand, the world of technology is also getting priceless gifts from IIT Kanpur.”

He also congratulated the students who received their degrees at the convocation.

“Many congratulations to the students who got the honour today. Where you have reached today, the qualifications you have achieved will be due to many people like your parents, your family members and your teachers,” said PM Modi.

The Prime Minister pointed out that when students came to IIT Kanpur “there was a fear of the unknown” but now they have the “belief to explore the entire world”.

“When you took admission to IIT Kanpur, you must have had a fear of the unknown. IIT Kanpur has taken you out of that and given you a massive canvas. Today, you have the belief to explore the entire world, the quest for the best,” said PM Modi.

At the convocation, all the students were issued digital degrees through an in-house blockchain-driven technology developed at the Institute under the National Blockchain Project.

Later in the day, Prime Minister will visit inaugurate the completed section of the Kanpur Metro Rail Project at around 1.30 pm.

‘Hi Janu’: How one message by Pulwama attack conspirator led to...