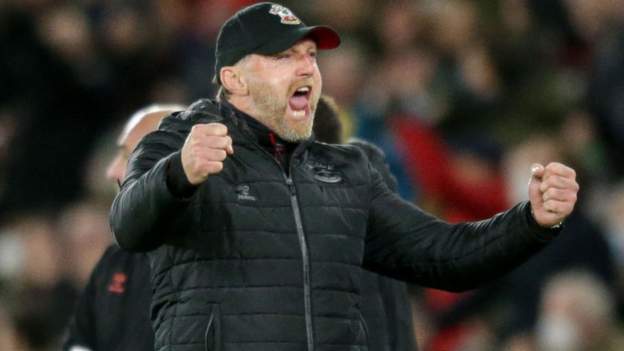 Southampton put on a show of resilience in holding Tottenham to a draw despite playing with 10 men for over 50 minutes at St Mary’s.

Ralph Hasenhuttl’s side started admirably when James Ward-Prowse cut across a bouncing ball to volley a swerving shot past Hugo Lloris for a superb opener.

But Saints looked to have undone their fine work when Mohammed Salisu fouled Son Heung-min in the box to earn a second booking in 12 first-half minutes and allow Harry Kane to score from the penalty spot.

Spurs twice had the ball in the net after the break, with Kane seeing a strike ruled out by VAR for a narrow offside and Southampton goalkeeper Fraser Forster spared own-goal blushes when it was judged he was fouled by Matt Doherty.

Tottenham felt aggrieved by the decision on Forster’s foul, but in truth they did not do enough after the break to pull and stretch a patched-up Saints back four, who repeatedly limited the visitors to crosses from wide areas.

The point means Spurs sit sixth in the table and Antonio Conte has become the first manager in the club’s history to remain unbeaten in his first seven league games.

But he expected more after Salisu’s red card and said his side “have to be disappointed”.

Hasenhuttl, on the other hand, punched the air on the final whistle and said there was “no chance to be more proud than today”.

Conte has now overseen four Tottenham wins and three draws in the league, and the likes of Pierre Emile-Hojbjerg explained before kick-off that the boss has called on players to raise their game technically, physically and in how they live as professionals away from the training ground.

Their effort could not be questioned in the second half at St Mary’s, with Doherty being denied by Forster, Son seeing a header held, and substitute Bryan Gil having a stinging shot tipped over in injury time.

If anything, Spurs simply took too long to build momentum with their one-man advantage, and Southampton – beaten only by Wolves at home in the league this season – ground out a point to move to 13th in the table.

Hasenhuttl made six changes from the Boxing Day win at West Ham and his side’s grit and resilience in the second period was typified by Kyle Walker-Peters, who leapt to glance a header away from the lurking Kane before immediately taking a Ben Davies shot flush in the face.

Spurs saw 53% of first-half possession, registering four shots. Those stats rose to 76% and 18 attempts in the second period – pointing to the significance of Salisu’s dismissal.

The Ghanaian defender had appeared on edge in the first half, recording four fouls in 39 minutes as Southampton looked to play high up the pitch and harass Spurs into errors. His dismissal was Southampton’s 11th since Hasenhuttl took charge in 2018, with only Arsenal having a higher tally, 13, in the same time frame.

The sharp Kane lashed his penalty high into the net and later came incredibly close to staying onside before applying a finish to a Harry Winks pass six minutes after the break.

But with the likes of the impressive Ward-Prowse winning all of his duels on the day, Southampton kept a solid shape to force Spurs wide. Conte’s side delivered 28 second-half crosses compared with three in the first 45 minutes and had little to show for their approach.

And Southampton could have won it in injury time when Armando Broja robbed Tottenham defender Eric Dier before firing over, sparing Spurs further frustration on a day when they could have taken more.