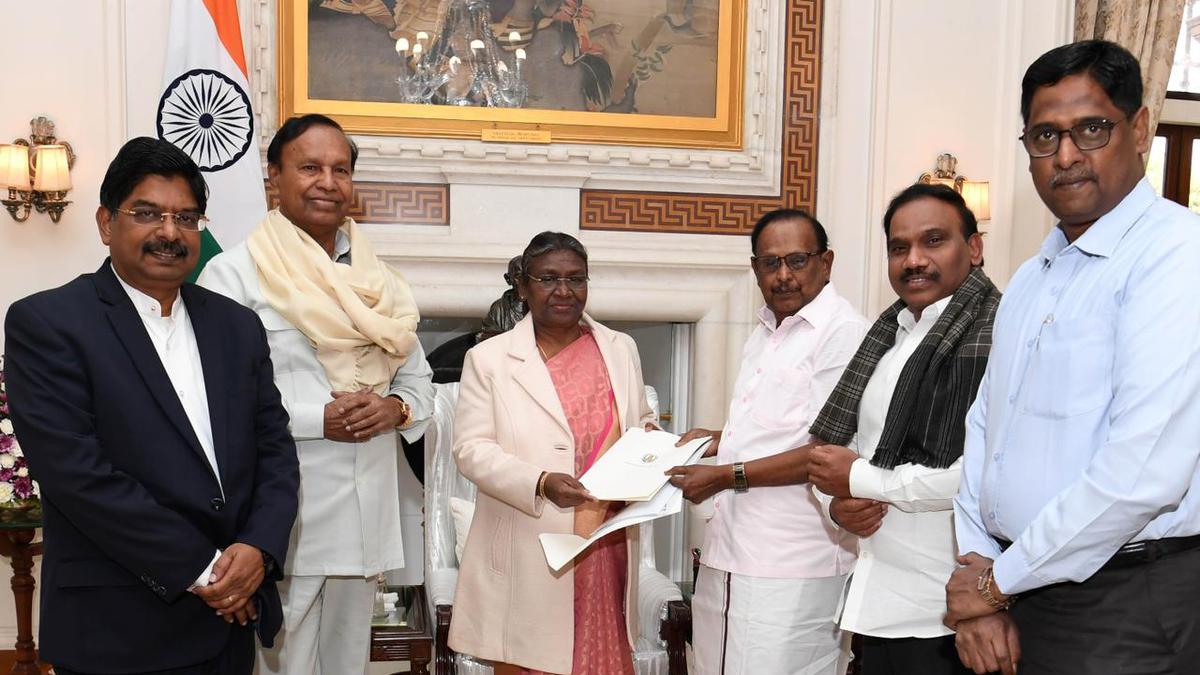 A Tamil Nadu government delegation hands over a memorandum to President Droupadi Murmu.

Tamil Nadu Chief Minister M.K. Stalin on Thursday sought President Droupadi Murmu’s intervention to ensure that Governor R.N. Ravi acts as per Article 163 (1) of the Constitution. He urged Ms. Murmu to advise Mr. Ravi to help the government to provide an efficient administration and strengthen democracy.

The summary of Mr. Stalin’s letter, which was handed over to the President by State Law Minister S. Regupathy, DMK Parliamentary party leader T.R. Baalu and others in New Delhi, revealed that the Chief Minister wanted the Governor not to take a political and ideological stand on public platforms and work for the people without violating values and tradition followed for many years.

Article 163 (1) says that “there shall be a council of Ministers with the chief Minister at the head to aid and advise the Governor in the exercise of his functions, except in so far as he is by or under this constitution required to exercise his functions or any of them in his discretion.”

The excerpts of the letter, which was released to the media, said that it was written with the intention of maintaining cordial relationship between various pillars of democracy and that they should render their duty in an effective manner.

Editorial | Bad and ugly: On the Tamil Nadu Governor’s walkout from the Assembly

Mr. Stalin said the Governor’s post was the highest office in a state and “we keep him on a high pedestal.”

“But at the same time a Governor should be politically impartial. But Mr. Ravi is adopting a political and ideological confrontation with the state government. It is against the Constitution. He is expressing himself as a person who has a stridently anti-stand against Tamil people’s unique culture, literature and inclusive politics,” Mr. Stalin informed the President in the letter.

He also charged the Governor was not able to accept the Dravidian principles, social justice, self-respect and rationalism followed by the people of the state. “He has been expressing views against Tamil culture and literature on public platforms. What he did in the Assembly is seen as an extension of what he is doing outside,” he alleged.

The Chief Minister said the Governor skipped the words such as Dravidian Model government, self-respect, inclusive growth, equality, communal harmony and women’s liberation. “He also refused to read out the reference made to leaders such as Periyar, Kamaraj and Dr. Ambedkar. By his action, he had subjected to question the ideas close to the heart of the people,” he said.

Mr. Stalin also drew the President’s attention to the delay caused by the Governor in giving his nod to important Bills passed in the Assembly.

“Tamil Nadu is a state that always welcomes people from other states and countries and is known for its hospitality. People belonging to various religions, languages and areas are living in amity. The Governor is trying to disturb peace by speaking against the cherished ideas of Tamil Nadu,” he alleged.