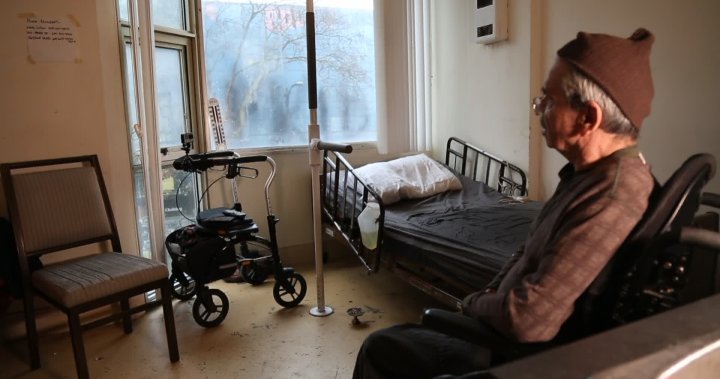 Residents of a single-room-occupancy or SRO hotel in Vancouver’s Downtown Eastside say they’ve been trapped in their rooms since the building’s elevator broke down last September.

“I’ve been stuck in my room for the last four months,” Victor Dickinson told Global News in an interview Saturday.

Dickinson, who has mobility issues, lives in one of 88 units of non-profit housing at the Portland Hotel at 20 West Hastings.

“A lot of times I just watch out the window, nowhere to go,” he said.

Dickinson has used a wheelchair for about a year and a half after he said a serious fall shattered both of his legs.

With the elevator out of service, leaving his second-floor room is almost impossible.

“I go down bum first,” Dickinson said, referring to the stairs.

After carefully sliding down two flights of stairs on his rear, Dickinson said he has to arrange for someone to bring his wheelchair to the ground floor.

“I crawl down the stairs and I try to get in it, sometimes I miss the chair and I fall on my ass,” he said.


Getting outside for a cigarette has also been a struggle for resident Rick Pelletier, who said he’s “crippled” with hip and back issues.

“I got to walk up eight floors every day and I go up and down,” said Pelletier, who would like to see the elevator fixed.

The Portland Hotel, which is just over 20 years old, is operated by PHS Community Services Society, with Vancouver Coastal Health and BC Housing as community partners.

Global News reached out to PHS regarding the broken elevator but did not receive a response by deadline.

Vancouver Coastal Health said it would not be able to provide any information until Monday.


BC Housing referred Global News to B.C. Housing Minister Ravi Kahlon, who said the elevator requires a complicated fix that has been delayed by supply chain challenges.

“BC housing went in, had a look and realized they actually had to replace major parts of the elevator,” Kahlon told Global News in an interview Saturday.

Kahlon said a contractor has been hired to do the work, which is expected to be completed by April.

“We have offered residents that have mobility issues alternatives to make sure that they have their needs accommodated.”

Ten people have accepted temporary housing elsewhere, according to Kahlon, who said BC Housing is willing to work with any Portland Hotel residents who still need to relocate.

Dickinson acknowledged one young woman at the Portland Hotel has been really nice and has even assisted him in getting around.

“She says you’re going to fall, I’m going to hang on to you so you don’t fall, and I sure appreciate her help.”

But when asked if he has any quality of life in his current situation, Dickinson said “No.”

Man charged with murders of nurse and her two children