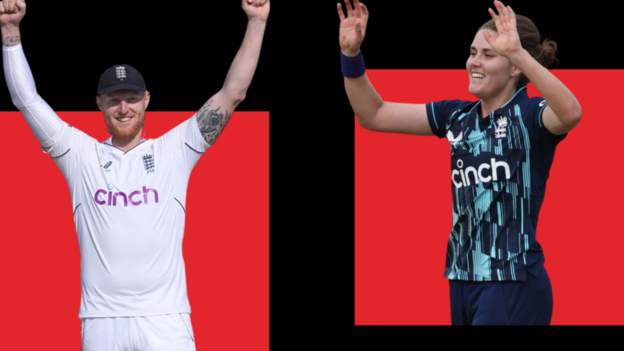 The ICC said Stokes “defined the year of Test cricket more than any other”.

He took over the Test captaincy from Joe Root in April 2022 and has won nine of his 10 Tests in charge.

Before his appointment, England had won just one Test in 17 matches.

It is the second time Stokes has claimed the award – previously winning in 2019 – and he was also named in the ICC’s Test Team of the Year for 2022.

With his positive style and commitment to entertaining, Stokes led England to series wins over New Zealand and South Africa at home, victory over India in a one-off postponed Test before finishing the year with a phenomenal 3-0 clean sweep in Pakistan – the first visiting side to ever win three Tests in the country.

Sciver named women’s overall and ODI player of the year

Sciver’s two awards come after she scored 1346 runs and took 22 wickets from her 33 international matches in 2022.

She scored five half-centuries and two centuries, including her maiden Test hundred against South Africa in June.

She also scored a stunning unbeaten 148 in the World Cup final defeat by Australia in March as England fell short of their target of 356.

Sciver took a break from the game after captaining England during the Commonwealth Games, where they finished fourth, to protect her mental health.

But she returned to the side in England’s clean sweep over West Indies in December and has returned to her role as vice-captain for the upcoming T20 World Cup.

No “Point In Protesting Against Pathaan” As…: Madhya Pradesh Minister