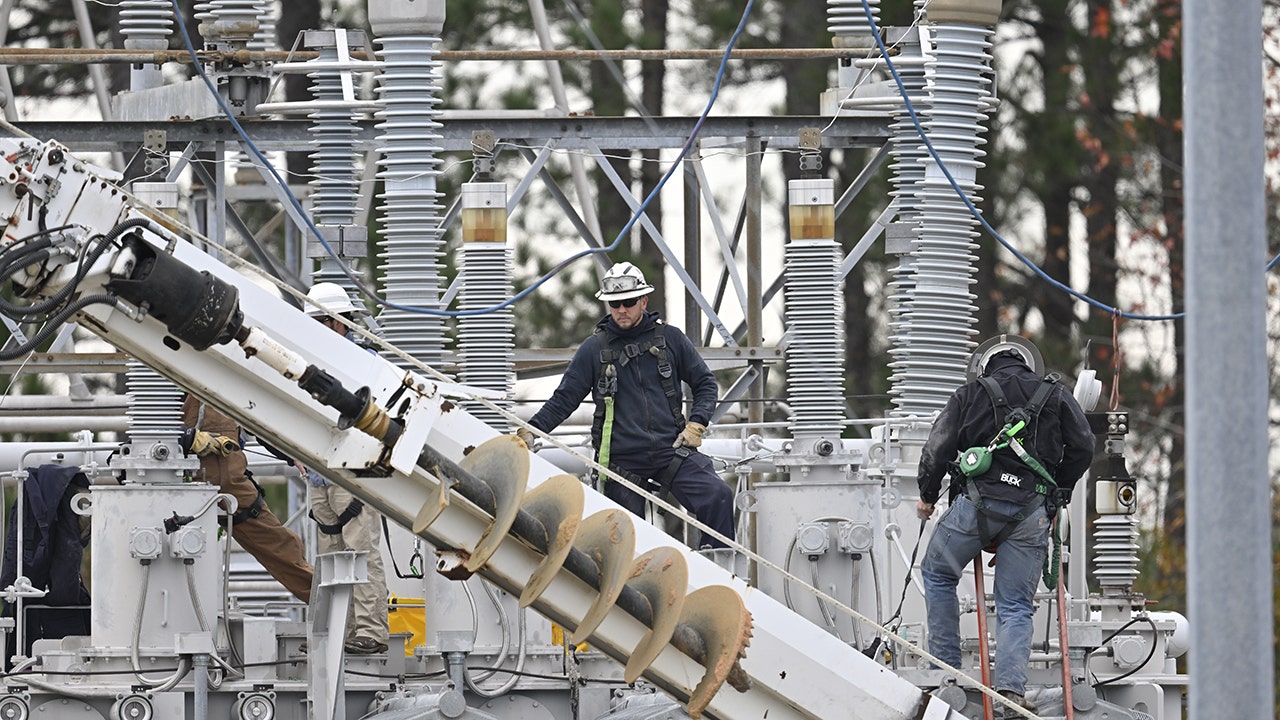 Policymakers in several states are looking to shore up the security of the electrical grid after a series of attacks at substations in recent months exposed vulnerabilities and knocked out power for thousands.

Over the last year, at least four states have reported deliberate attacks against electrical transmission facilities. The most significant outage occurred in early December, when a peak of over 45,000 utility customers in Moore County, North Carolina, were left without power after two substations were attacked with gunfire.

Republican state Rep. Ben Moss is proposing legislation that would strengthen security and told the AP that December’s attacks turned his district into “a ghost town.” He added, “When the power goes out, you don’t have heat, don’t have food, can’t get fuel or some medications, the people are unsafe.”

WHAT IS THE NATIONAL POWER GRID AND HOW RESILIENT IS IT?

CARTHAGE, USA – DECEMBER 05: A view of the substation while work is in progress as tens of thousands are without power on Moore County after an attack at two substations by Duke Electric were shot at in Carthage NC, United States on December 05, 2022 (Photo by Peter Zay/Anadolu Agency via Getty Images / Getty Images)

A draft version of the bill obtained by the AP would require utilities to provide 24-hour security at substations and security improvements would vary at different sites, as some facilities are gated and have video surveillance while others are relatively exposed. Moss considers his bill “a conversation opener” that he hopes will help lawmakers, utilities and security experts identify cost-effective defenses that won’t result in higher prices for consumers.

Last week, authorities in North Carolina reported an incident involving gunfire at a substation in Randolph County. No outages were reported and the FBI’s Joint Terrorism Task Force is reportedly probing the incident. No arrests have been made in either the Moore County or Randolph County substation attacks.

South Carolina saw at least 12 incidents involving intentional damage at substations last year, including an incident the FBI responded to days after the Moore County, North Carolina, in which gunfire was reported, but the power remained on.

A gate blocks the road leading to the West End Substation, at 6910 NC Hwy 211 in West End, N.C., Monday, Dec. 5, 2022, where a serious attack on critical infrastructure has caused a power outage to many around Southern Pines, N.C. ( AP Photo/Karl B DeBlaker / AP Images)

Utility companies in South Carolina are calling on lawmakers to toughen penalties for destroying electrical infrastructure, and a bill in the state Senate would implement a sliding scale based on damage done to the facilities. Under the proposal, damage exceeding $25,000 could land a perpetrator in prison for up to 20 years – double the current 10-year maximum sentence. A 25-year sentence would apply if anyone died or their health was damaged by an outage following an attack.

Workers work on equipment at the West End Substation, at 6910 NC Hwy 211 in West End, N.C., Monday, Dec. 5, 2022, where a serious attack on critical infrastructure has caused a power outage to many around Southern Pines, N.C.  (AP Photo/Karl B DeBlaker / AP Images)

Two men in Washington state are facing charges of conspiracy to damage energy facilities after they attacked four substations dozens of miles apart on December 25, 2022, and knocked out power for 15,000 customers in the Puget Sound area. Prosecutors say the motive was to commit a burglary at an area business while power was down.

Washington’s State Energy Office is looking to make physical and cybersecurity updates to the state’s electrical infrastructure as it undergoes an overhaul under the state’s Clean Energy Transformation Act.

No arrests have been made in the deliberate attack on a substation in Clackamas County, Oregon, that occurred on the morning of Thanksgiving. Oregon’s Public Utility Commission is working with the utility companies it regulates to increase vigilance and explore security improvements at facilities.

Federal energy regulators are also looking to make improvements to the security of the electrical grid. The North American Electric Reliability Corporation (NERC), which oversees America’s bulk power system, is expected to submit a report and make recommendations on possible security improvements by early April.

The Associated Press contributed to this report.

Major Social Security trust funds could be tapped out by 2033: CBO

Budget 2022-23 wishlist: Here are the key challenges in technology sector

Firms may be hiking prices beyond inflation – Tesco boss