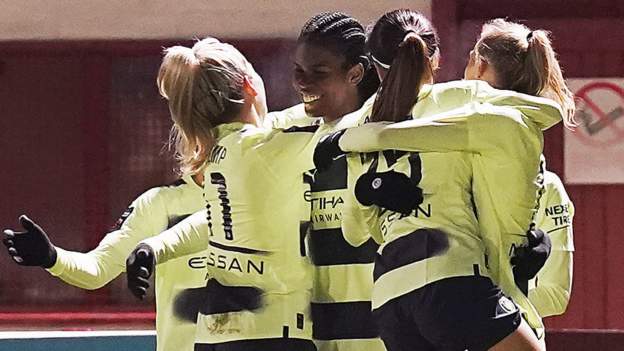 Women’s Super League top-scorer Khadija Shaw scored the only goal of the game as Manchester City moved to within three points of the Champions League places with a narrow win at West Ham.

Deyna Castellanos’ excellent first-time pass put Shaw through on goal and the Jamaica striker coolly rounded the goalkeeper to score her ninth league goal of the season five minutes into the second half.

The game was played exclusively in the West Ham half for long spells but the hosts did have chances and must still be wondering how an almighty scramble in the City six-yard box did not bring the opening goal after 25 minutes.

In the second half, Paul Konchesky’s side pressed for an equaliser but City looked the more likely to add to the goal tally late on.

Shaw’s stabbed effort came back off the post and Castellanos was denied by a good reaction save from Hammers goalkeeper Mackenzie Arnold.

City’s win extends their unbeaten run to 11 matches in all competitions and sees them close the gap on third-placed Arsenal.

City keep themselves in title contention

Back-to-back defeats to start their WSL campaign has left City playing catch-up this season with Chelsea, Manchester United and Arsenal storming ahead.

However, they are unbeaten since a 2-0 reverse at Chelsea late in September and following the 1-1 draw between Arsenal and leaders Chelsea, they are now only six points off top spot with a game in hand.

For all their dominance in the first period, the visitors required some luck to go into half-time level as Leila Ouahabi cleared Grace Fisk’s shot off the line during a goalmouth scramble before Ellie Roebuck saved from Risa Shimizu after Gareth Taylor’s team switched off at a throw-in.

The threat before the break had come from England pair Chloe Kelly and Lauren Hemp on the wings but when the goal came, it was an arrow through the heart of the West Ham defence.

Yui Hasegawa’s incisive pass took out two West Ham players and Castellanos did for the rest as she opened up her body to slide a perfectly-weighted through ball into the path of Shaw.

It was a goal of the highest class to break a stubborn West Ham backline and while Shaw had the chance to make the final minutes more comfortable, one was enough to keep City in touch with those above them.

Covid: All countries to be removed from England’s travel red list

UP Election 2022: Akhilesh Yadav to contest from family bastion Karhal,...