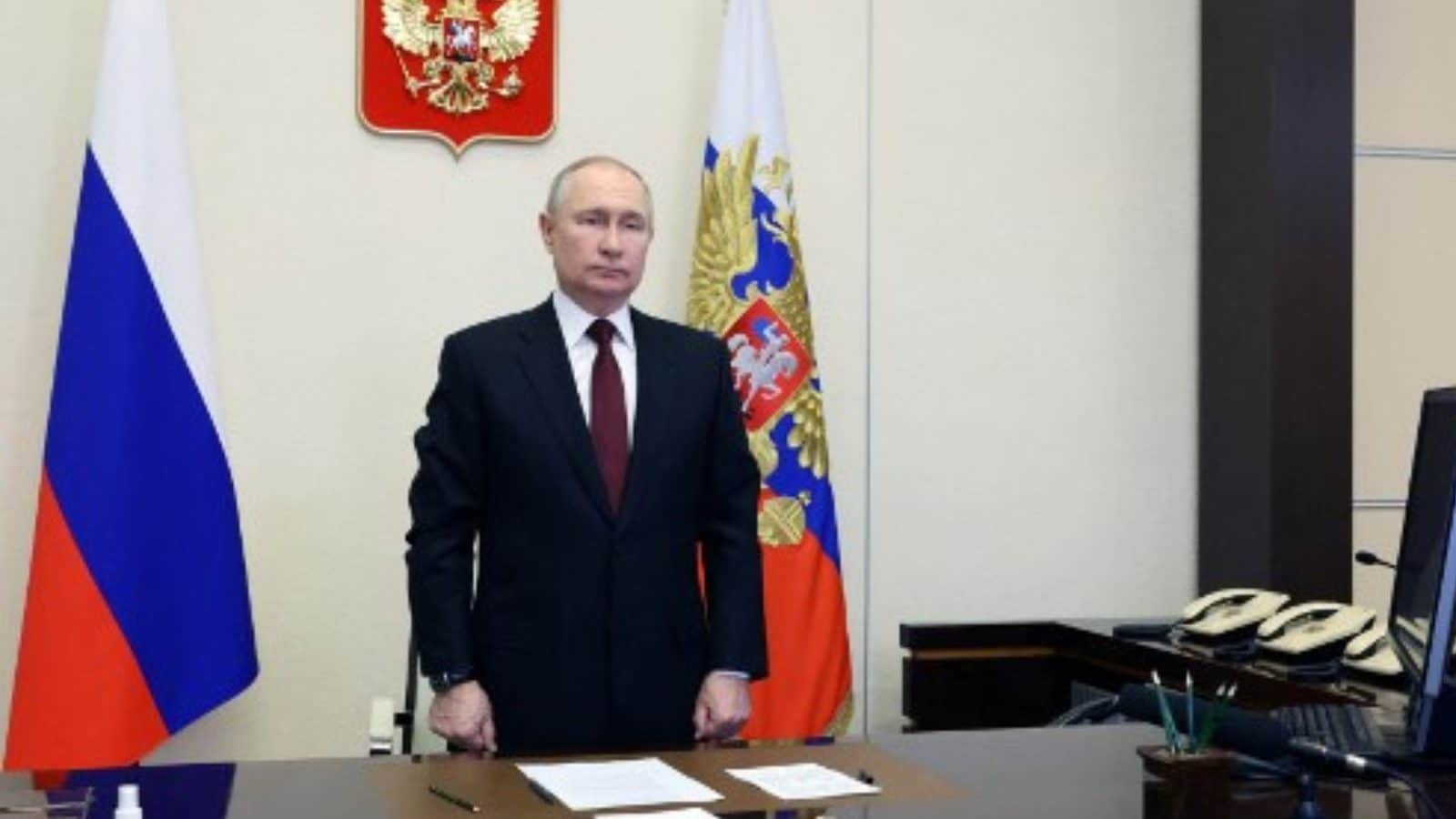 Russian President Vladimir Putin takes part in ceremony to commission new warships into the Russian navy, via a video link at the Novo-Ogaryovo state residence, outside Moscow, on December 29, 2022. (AFP)

The channel’s director in France, Xenia Fedorova announced in a statement posted on Twitter later Saturday that this had been the final blow

Moscow will retaliate against French media in Russia after the bank accounts of RT France, the French arm of its state broadcaster, were frozen, Russian news agencies quoting an anonymous foreign ministry source reported Saturday.

Hours later, the director of the channel in France announced that it would have to shut down as a consequence.

“The blocking of RT France accounts will lead to retaliatory measures against the French media in Russia,” the TASS and RIA Novosti news agencies quoted the foreign ministry source as saying.

The measures “will be remembered”, the source said, accusing Paris of “terrorising Russian journalists.”

The channel’s director in France, Xenia Fedorova announced in a statement posted on Twitter later Saturday that this had been the final blow.

“After five years of harassment, the authorities in power have achieved their goal: the closure of RT France,” she wrote.

She denounced the French move as an “arbitrary measure” that amounted to censorship, adding that 123 employees were at risk of not being paid for January and could lose their jobs.

The accounts freeze was part of the latest European Union sanctions against Russia.

On Friday, the unions of RT France — already banned from broadcasting — said their accounts had been frozen in the country.

The French finance ministry told AFP that chain’s assets had been frozen in compliance with the most recent EU sanctions over Ukraine — not on Paris’s initiative.

Unlike the initial sanctions decided after Moscow launched its Ukraine offensive, fresh EU measures adopted in December provided for an “asset freeze” of targeted entities, the same ministry source said.

Among those entities is “ANO TV Novosti, a parent company holding 100 percent of RT France”, the source said, explaining the decision.

But an RT France trade union representative countered this, saying the order came directly from the French treasury.

“We received a letter from our bank on January 18 which said that our bank accounts were frozen at the request of the general management of the treasury,” the representative told AFP.

EU authorities had in March last year banned RT — including the French language version — and fellow Russian broadcaster Sputnik from transmitting in the EU bloc or online, accusing them of acting as mouthpieces for Kremlin “disinformation”.

In July, the European Court of Justice threw out an appeal from RT France against a broadcast ban introduced by the EU shortly after the Kremlin sent troops to Ukraine.

France was the only EU member state still to host an RT branch, having done so since 2017, and retain a registered RT subsidiary, which has continued to produce and distribute programmes that are available via VPN internet access.

Launched in 2005 as “Russia Today”, state-funded RT has expanded with channels and websites in languages including English, French, Spanish and Arabic.

Even before the Russian military operation in Ukraine, Germany had taken the German language RT service off the air in December 2021 for not having a valid satellite licence.

Most Western media outlets are already off-air in Russia and have seen their websites banned.