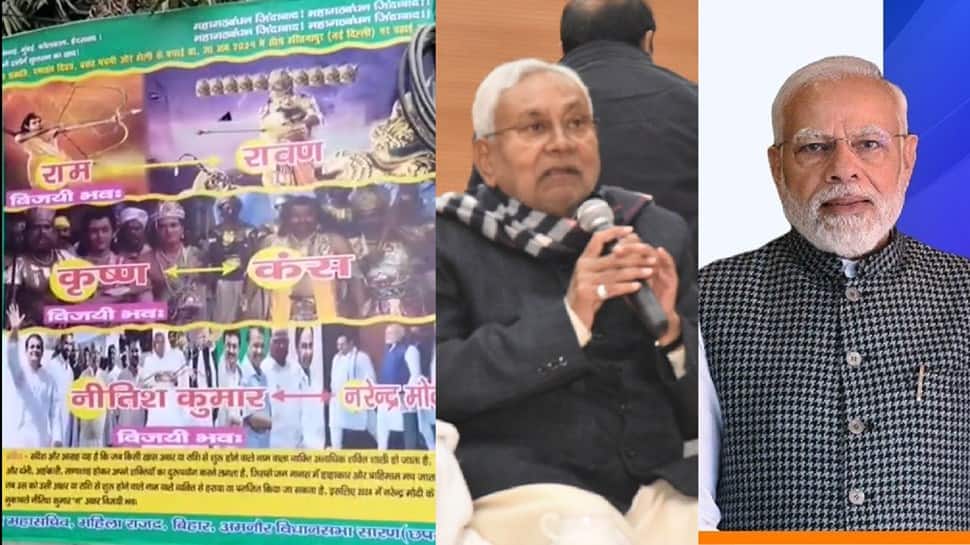 In Bihar, a fresh poster put up by some Rashtriya Janata Dal (RJD) workers has created a controversy as it compared Prime Minister Narendra Modi to Ravana and Kansh. The poster showed that a war took place between Ram and Ravana in Ramayana kal, and between Krishna and Kansh in Mahabharat kal and it went on to suggest that the 2024 political battle will be between a grand alliance of opposition parties and Narendra Modi-led BJP. The poster showed Rahul Gandhi, Nitish Kumar, K Chandrasekar Rao, MK Stalin, Arvind Kejriwal, Tejashwi Yadav and Sharad Pawar as a part of the grand alliance.

However, the poster did not go well with the BJP which hit back saying that instead of Nitish-NaMo, the fight could be just the opposite.  “This is not the era of the war of the monarchy. This is an era of democracy where votes decide fate. Ram-Ravana and Krishna-Kansh are fine but instead of Nitish-NaMo, NaMo-Nitish can also be written. But why kill a person who is already dead? RJD’s poster fools, what do you think about the rhyme of Tej(Pratap)-Tej(shwi)?” asked Bihar BJP spokesperson Nikhil Anand.

It may be noted that opposition parties have, on multiple occasions, compared PM Modi to Ravana through their posters.  In 2019 as well, posters depicting Rahul Gandhi as Ram and PM Modi as Raavan had surfaced ahead of a Congress rally in Madhya Pradesh.