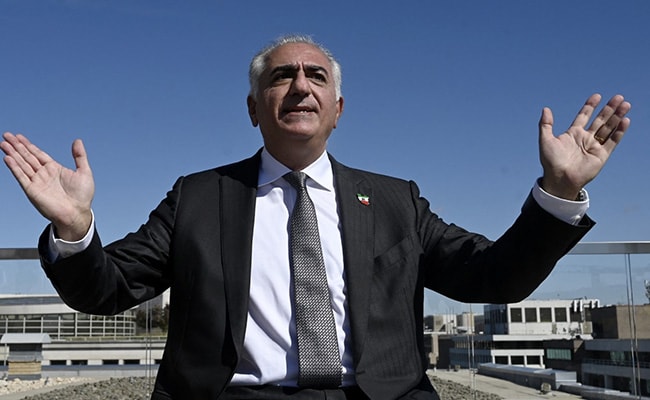 The son of the late shah hailed Iran’s mass protests as a landmark revolution by women and urged the world to add to the pressure on the clerical leadership.

Reza Pahlavi, whose father was toppled in the Islamic Revolution of 1979, called for greater preparation for a future Iranian system that is secular and democratic.

“It is truly in modern times, in my opinion, the first revolution for the women, by the women — with the support of the Iranian men, sons, brothers and fathers,” Pahlavi, who lives in exile in the Washington area, told AFP.

“It has come to the point, as the Spaniards would say, basta — we’ve had enough.”

Demonstrations have swarmed major cities, with dozens killed, since 22-year-old Mahsa Amini died on September 16 in the custody of Iran’s notorious morality police, allegedly for breaching the strict requirements that women wear headscarves in public.

While also condemning discrimination against minorities and the LGBTQ community, Pahlavi said, “The symbolism of today’s repression is represented by women.”

“I think most Iranian women, when they look at the freedoms that women in the free world experience and exercise, are asking for the very same rights for themselves,” he said.

His grandfather, Reza Shah, banned all Islamic veils in 1936 as part of a Westernization drive inspired by neighboring Turkey.

The last shah, Mohammad Reza Pahlavi, let the veil be a choice — which ended when the Islamic republic imposed requirements for women’s “modesty” in public.

Pahlavi, the father of three daughters, said that Iranian society has come a long way from the days of “male chauvinism” and that women’s choices should be respected.

“Women may decide to wear or not wear the veil. But it ought to be a choice, a free choice, not imposed for ideological or religious reasons,” he said.

Separation between church and state

Pahlavi, while enjoying respect in much of the exile community, says he is not seeking to restore the monarchy, an idea that has limited support inside Iran.

Working with the overseas opposition, Pahlavi favors a constituent assembly that would write a new constitution.

“There’s no way you can actually have a true democratic order without a clear definition and separation of church from state,” Pahlavi said.

The Islamic republic has survived more than four decades despite dissent and antipathy from the West, particularly the United States.

But Pahlavi insisted that the system could end at any time — and that the world needed to be ready.

“We need to consider the high possibility that this regime will not exist for long,” he said.

“I’ve been saying for some time — it could happen in a few weeks or a few months, and we need to think of the alternative.”

Pahlavi said that there should be a “controlled implosion” with a smooth, peaceful transition.

He praised much of the strong international comments on the protests, including from Germany and Canada.

But he called for more action including the expulsion of diplomats and freezing of assets.

“It’s important for more than just giving moral support. These are the kinds of measures that are impactful,” he said.

He renewed his call for a strike fund to compensate workers, hoping that the nationwide demonstrations could transform into a general strike.

Pahlavi, while supporting diplomacy, voiced misgivings over a potential return by the United States to the 2015 nuclear deal under which Iran would again be allow to sell oil openly on global markets.

Western powers often believe they can “create an incentive for the regime to change its behavior, so we can drag them back to be good boys and behave,” Pahlavi said.

But the Islamic republic, he said, is rooted in exporting an ideology.

West Greenville artist gets support from community after devastating fire