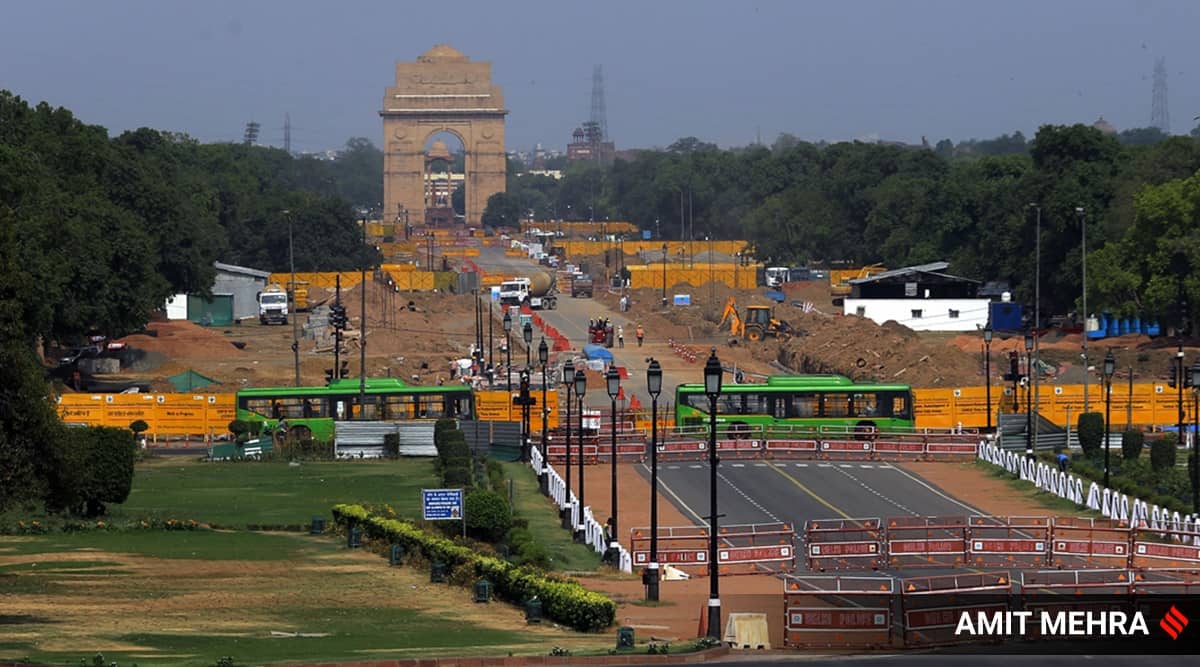 The Central Vista Avenue – which comprises Rajpath, leading from Rashtrapati Bhawan to India Gate — will be completed ahead of the Republic Day Parade on January 26 next year, the chief architect firm for the project, HCP Design, Planning and Management Pvt Ltd, said but added that the construction of underpasses would be completed later.

“The Central Vista Avenue will be ready for the Republic Day Parade. Some facilities, such as the amenity blocks and underpasses, will be completed later,” the HCP told indianexpress.com.

“The Ministry of Defence has already started preparation for the Republic Day Parade,” it said.

Usually, rehearsals for the Republic Day Parade begin weeks before January 26. The Central Public Works Department (CPWD), the Centre’s nodal agency for the project, and the construction firm, Shapoorji Pallonji and Company Limited, which bagged the contract for the redevelopment of the avenue, are racing to finish the stretch that will be used for the Parade against a tight deadline.

As to how soon will the Rajpath Avenue be opened to the general public, the HCP said it would take some time to dismantle the arrangements made for the Republic Day Parade.

“Some portions of the avenue will have to be completed after the parade,” the HCP said.

Earlier this month, the minister of state for housing and urban affairs, Kaushal Kishore, informed Parliament that the physical progress of the Central Vista Avenue was only 60% complete with Rs 190.76 crore spent out of the total budget of Rs 608 crore but added that it was scheduled to be completed by this month.

The Union government had also announced last year that the length of the Central Vista axis which extends from the Rashtrapati Bhawan, through the North and South Blocks, over Rajpath and to India Gate, would double from 2.9 km to 6.3 km – right up to the riverbank.

According to the plan post-redevelopment, the space of lawn across the Avenue is expected to increase from 3,50,000 square metres to around 3,90,000 square metres, resulting in an increase in the overall green cover of the Central Vista Avenue. It also claims that the India Gate Plaza will be refurbished with widened pedestrian sidewalks and the walkway through canals will be refurbished to make it pedestrian friendly.

More than Rs 1,200 crore have been allocated for various phases of the Central Vista Redevelopment project so far, the housing ministry said in a response in Parliament. It also said that physical progress for the new Parliament building, which is scheduled to be completed by October 2022, stood at 35% and Rs 340 crore out of Rs 971 crore have been spent on it thus far.

According to the reply, the construction target for the three Common Secretariat Buildings is November 2023 and the mobilization of resources and site preparation are in progress currently.

The government last month also formed a high-level ‘Central Vista Oversight Committee’ to monitor and expedite the pace of its ambitious infrastructure project. The committee will have to continuously monitor the pace of execution of various projects of the Central Vista with respect to targeted milestones to ensure their timely completion, the order noted. It will meet regularly and undertake site inspections for an independent review. It has also been directed to submit its reports and recommendations to the ministry on a regular basis.

Tentatively, the vice president’s enclave and the new Parliament House will be the first buildings to be completed, and work on shifting the National Museum to the North and South Block will commence last.

A tentative completion timeline of the CPWD showed that an underground Automated People Mover (APM) for Union government employees and a central conference centre will be the final two projects to finish by September 2026 and December 2026, respectively.

According to the proposal submitted to the environment ministry last year, around 458,820 square metre of built-up area will have to be demolished. This includes the current building of IGNCA, Shastri Bhavan, Krishi Bhavan, Vigyan Bhavan, vice-president’s residence, National Museum, Jawahar Bhavan, Nirman Bhavan, Udyog Bhavan, Raksha Bhavan and INS Hutments. The main building of the National Archives will not be demolished, but its annexe will be razed.

Under the project, a “Nav Bharat Udyan” is also planned along the western banks of Yamuna as part of the Centre’s plan to extend the Central Vista axis from the India Gate till the river. It was earlier expected to be unveiled by August 15, 2022 but has been delayed without a new timeline.

UK PM Boris Johnson Under Fire Over “Bring Your Own Booze”...