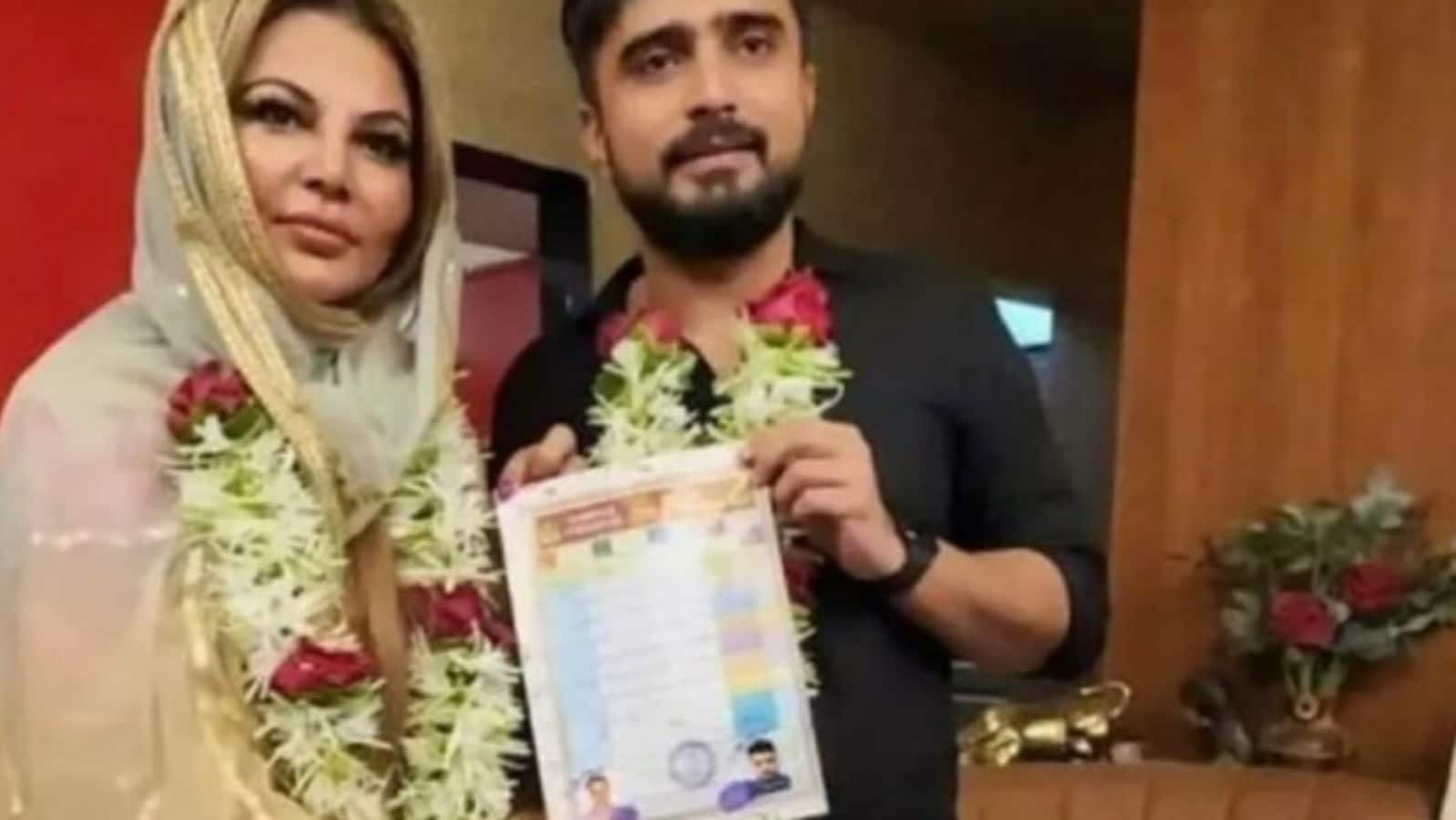 After wedding pictures of Rakhi Sawant and her boyfriend Adil Khan surfaced online, she confirmed her secret wedding which took place on 2 July 2022. She said she got married to Adil last year, after three months of knowing him. Her confirmation comes after Adil denied the wedding speculations to a news channel. Also read: Are Rakhi Sawant and her boyfriend Adil Khan married? Wedding pictures surface online

On Wednesday, pictures featured Rakhi wearing a white and pink coloured sharara, with a beige dupatta on her head. Adil looked casual in a shirt and jeans. The two had garlands around their neck and were seen signing some paper which appeared to be their marriage registration form. Later, she shared the photos on her Instagram account and wrote, “Finally, I’m happy so excited and got married my love is 4 Ever unconditional love for you Adil.”

Speaking to ETimes about the wedding which came out of nowhere to fans, Rakhi said, “Yes, I got married to Adil in July last year after three months of knowing him. We had a nikah ceremony and a court marriage. Since he stopped me from disclosing it, I remained tightlipped for the past seven months. He felt that it would get difficult to find a suitor for his sister if people got to know about our marriage. According to him, tum Rakhi Sawant ke saath judoge toh tumne badnaami lee hai (If you associate yourself with Rakhi Sawant then that means you have invited shame).”

“A lot happened while I was away locked up inside the Bigg Boss Marathi 4 house recently. I will talk when the time is right. At this point, all I want is to save my marriage. I want the world to know that I am married to Adil. Main bahut pareshan hoon isliye logon ke saamne meri shaadi aana zaroori hai (I am worried hence people need to know about my wedding),” she also added.

Rakhi Sawant was previously married to Ritesh Raj. The two even appeared together in Salman Khan’s reality show Bigg Boss 15. Speaking about him in the same interview, Rakhi called marrying Ritesh a ‘mistake’ and said she learnt about him after participating in Bigg Boss. She also added that her marriage with Ritesh wasn’t legal as he hadn’t divorced his first wife. According to her, she has a ‘strong desire to become a mother’, however, it’s Adil’s family who is yet to accept her.

Girish Kulkarni: ‘Marathi and Malayalam movies have many similarities’

Exclusive: How to move on after a divorce – counsellor shares on managing grief and letting go | Love, Relationships News

#IndiaAtCannes || Vani Tripathi Tikoo: India was flavour of the season