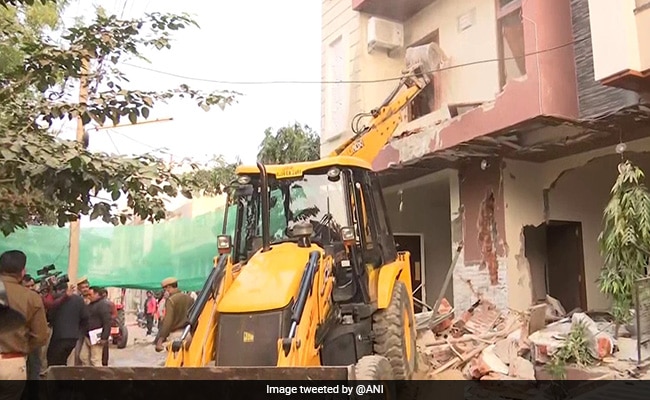 Jaipur Authority removed a residential building belonging to one of accused in recent paper leak case.

The authority claimed that portions of the residential structure were illegal.

“This house belongs to Bhupendra Saran. Its portions were found constructed illegally, so we went ahead and removed them,” Chief Enforcement Officer of JDA Raghuveer Saini told ANI.

As the ‘anti-encroachment drive’ against the accused involved in the case raised eyebrows, the authority claimed that it was removing illegal portions of the house.

“We are demolishing the illegally constructed portions of the house. These constructions are illegal as per the Jaipur Development Authority (JDA) guidelines,” said Mr Saini.

Earlier on Monday, JDA demolished a five-storey building run by a coaching centre operator Suresh Dhaka, another accused in the case.

The building had illegal commercial construction of serious nature such as zero setbacks and encroachment on the road, an official release from the police department said.

The coaching institute was served the notice twice and after not getting any satisfactory reply from the owner, the building was demolished on Monday morning.

In December, the Rajasthan Public Service Commission (RPSC) cancelled the 2nd-grade teacher competitive examination 2022 for General Knowledge as the paper was leaked and rescheduled for January 29.

After at least half a dozen major examination paper leaks have rocked Rajasthan since the Congress came to power in 2018, the Opposition accuses the Ashok Gehlot government of failing to curb the menace.

Over 90 Injured, Some Critical, After Blast In Pakistan Mosque

Wrexham serve up Hollywood drama in the FA Cup