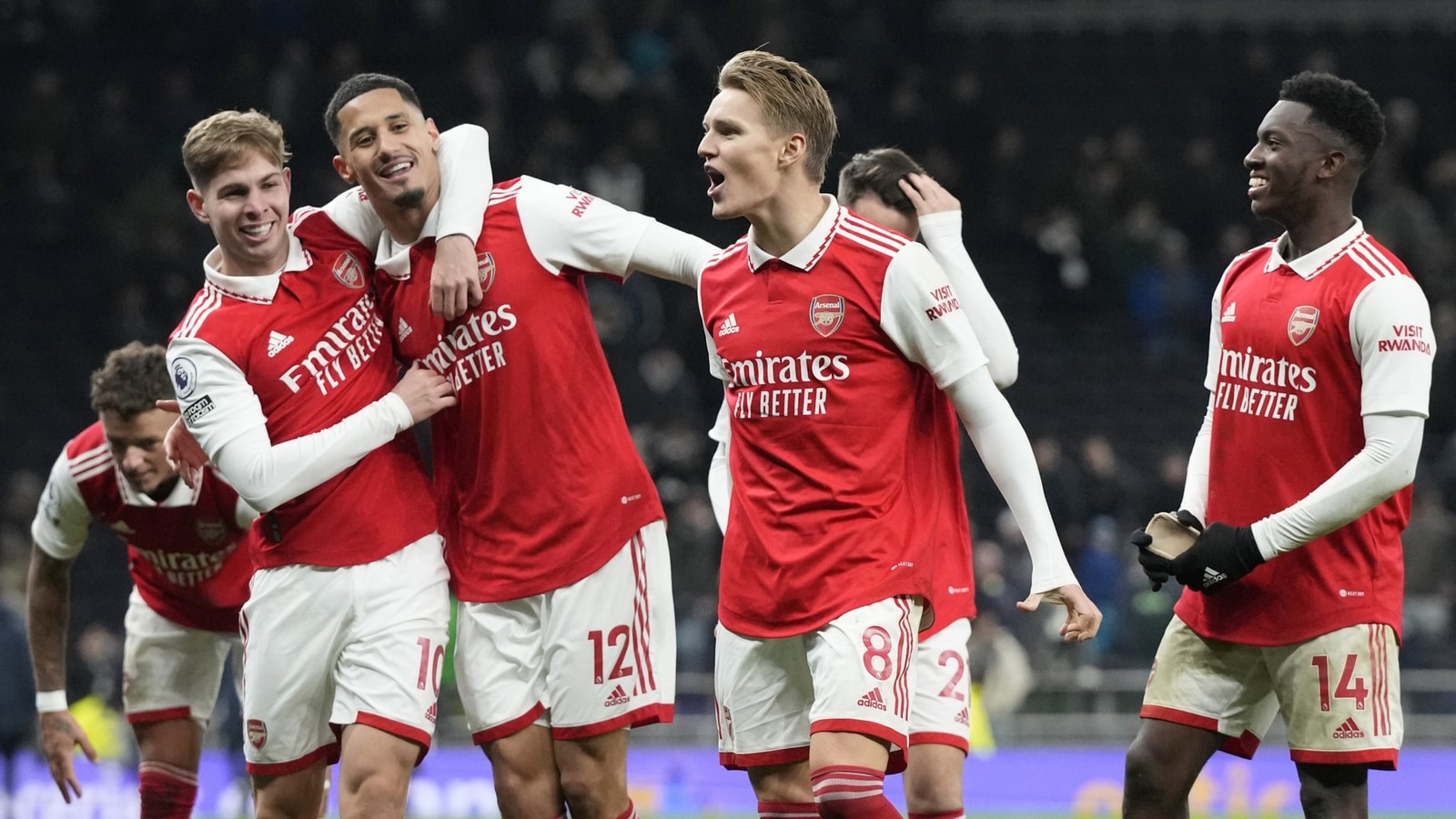 Leaders Arsenal put on a masterclass to overwhelm shell-shocked north London rivals Tottenham Hotspur 2-0 away and extend the gap at the top of the Premier League to eight points on Sunday.

The Gunners flew out of the blocks from the opening whistle and built a first-half lead through a clumsy own goal by Spurs keeper Hugo Lloris and a sublime strike from Martin Odegaard.

Tottenham were totally outplayed by a fired-up Arsenal side under Mikel Arteta who were determined to make amends for a loss at Spurs last season that ultimately cost them a top-four place.

They dominated the first half and battled gamely in the second, leaving Tottenham boss Antonio Conte looking glum on the sidelines as he clapped his hands to rally his sorry side.

Striker Harry Kane, needing one more goal to equal Jimmy Greaves all-time Spurs’ scoring record, had chances either side of the break but keeper Aaron Ramsdale was equal to them.

“It is about time. It felt amazing,” Arsenal captain Odegaard told Sky Sports. “We remembered what happened here last time and we wanted to play a better game and show a different side to us. We enjoyed the game.”

The win puts Arsenal on 47 points from 18 games ahead of Manchester City on 39, with Newcastle United, who have played a game more, and Manchester United a further point back.

Spurs are in fifth place with 33 points from 19 matches.

Arsenal had the first clear chance after seven minutes when Eddie Nketiah’s shot was well saved by the diving Lloris.

They took the lead seven minutes later when Bukayo Saka crossed from the right and Lloris fumbled the ball into his own net for the first time in his 354-game Premier League career.

Arsenal were in almost total control and Odegaard nearly put the visitors further ahead with a rasping long-range drive that Frenchman Lloris tipped round the post.

Thomas Partey then came even closer with a fierce volley from just outside the area that crashed against the post.

But Arsenal did stretch their lead in the 36th through Odegaard’s precise shot into the corner past a helpless Lloris.

Spurs fashioned a rare chance just before the break when Kane’s glancing header was turned away by Ramsdale at the near post after Pierre-Emile Hojbjerg’s cross from the right.

Kane then forced another fine save from Ramsdale after halftime as the hosts tried to get back in the game.

But despite all the huffing and puffing, Tottenham could not find a way through and it was the visitors who nearly scored again in the 69th when Saka’s close-range effort was saved.

The victory meant Arsenal enjoyed their first league double over Spurs since the 2013-14 season and, more importantly, put them firmly in control of the title race.

“We are in a good position, there is no doubt about that,” added Odegaard. “We’ve got to stay humble and keep working hard. You saw the difference in the first and second half today so we have things to improve. We have to keep going.”

This story has been published from a wire agency feed without modifications to the text. Only the headline has been changed.