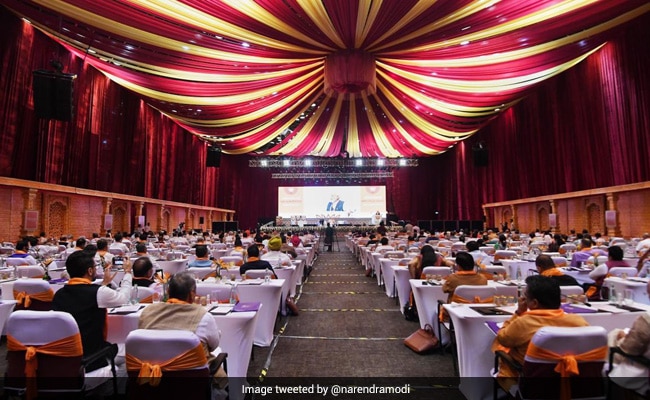 The RSS and BJP leaders have been demanding to rename the Hyderabad as Bhagyanagar.

Hyderabad or Bhagyanagar? Prime Minister Narendra Modi, in the city for the big BJP meet, referred to Telangana capital as Bhagyanagar during his address to the delegates from across the country.

The Prime Minister said that it was in Bhagyanagar that Sardar Patel, the freedom fighter icon, had coined the term “Ek Bharat”.

“PM Modi said that Hyderabad is Bhagyanagar which is a significance for all of us. Sardar Patel kept the foundation of a unified India and now it’s BJP’s responsibility to carry it further,” BJP leader Ravi Shankar Prasad said in Hyderabad quoting the Prime Minister.

The RSS, BJP’s ideological fountainhead, and several BJP leaders have been demanding to rename the Hyderabad as Bhagyanagar.

Asked if Hyderabad’s name will be changed to Bhagyanagar, Union Minister Piyush Goyal said, “When the BJP comes into power in the state, the chief minister will decide this along with the cabinet colleagues.”

The BJP’s decision to choose Hyderabad for the meet is being seen as the clearest signal from the party that the state is its top priority in its agenda for expansion in territories where it remains relatively weak.

Since coming to power at the Centre in 2014, this is only the fourth time the party is holding its key national meet outside Delhi. It had held earlier meets in Odisha in 2017, Kerala in 2016 and Bengaluru in 2015.

Uttar Pradesh Chief Minister Yogi Adityanath, who campaigned for BJP candidates during Greater Hyderabad Municipal Corporation or GHMC election in 2020, had also urged voters to vote for the party “to transform Hyderabad into Bhagyanagar.”

Indian Man Charged with Attempted Murder of Student in UK