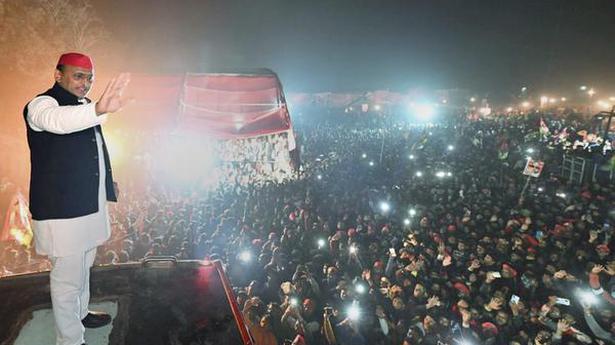 As the Income-Tax Department searched multiple locations linked to Samajwadi Party MLC and perfume trader from Kannauj Pushpraj Jain ‘Pampi’, party president Akhilesh Yadav on Friday accused the BJP government of roping in Central agencies as “allies” due to the “fear of losing” the 2022 Uttar Pradesh election and trying to defame his party as well as Kannauj, known country-wide for its perfume industry and a traditional Yadav family stronghold.

Mr. Yadav claimed the I-T raids were conducted on Mr. Pushpraj to cover up and “rectify the mistake” made by the BJP government by earlier accidentally raiding “their own man”, Piyush Jain, from whom tax officials recovered over ₹197 crore in cash, 23 kg of gold with foreign markings and unaccounted perfumery raw material worth ₹6 crore.

With the BJP linking the cash recovered in the raid and Piyush Jain himself to the SP in its election campaign, Mr. Yadav, who held a scheduled press conference in Kannauj hours after the fresh I-T search began against his MLC, asked the BJP leadership to explain on what basis they were making such claims. He reiterated that the SP had no connection to Piyush Jain and demanded that his CDR (call record details) be made public to expose his real link, which he said was with the BJP. “How come such large quantity of notes were recovered [from Piyush Jain]? The BJP had said there would be no black money after note bandi (demonetisation in 2016) and that people would not be able to hoard cash,” Mr. Yadav said.

Referring to the raid on Mr. Pushpraj, who also owns petrol pumps, cold storage operations and real estate apart from a well-established perfume business, Mr. Yadav said the BJP was targeting the SP through the Central agencies as it had sensed it was losing the U.P. election. Mr. Pushpraj recently launched a Samajwadi Ittar or ‘Socialist Perfume’ combining 22 different fragrances as a symbol of inclusive politics. He has no criminal cases, as per his MLC election affidavit.

“The BJP is rattled,” said Mr. Yadav, accusing the BJP government of having an alliance with the Enforcement Directorate, Income Tax Department and the Central Bureau of Investigation.

Mr. Yadav also appealed the Election Commission of India to stop raids by Central agencies in U.P. till the election was over. “No political party can compete with the propaganda machinery of the BJP,” said Mr. Yadav accusing the BJP of spreading lies.

Meanwhile, top BJP leaders continue to link the SP with the cash recovery in the Piyush Jain and Pushpraj raids. Addressing a rally in Ayodhya, BJP leader and Union Home Minister Amit Shah said the “stench of the Samajwadi ittar” was spread across U.P. “Today, when raids are being carried out their belly is simmering,” Mr. Shah said. “Do you have a problem if there is a raid on those with black money,” Mr. Shah asked the public. “What problem do you have Akhilesh bhai?”