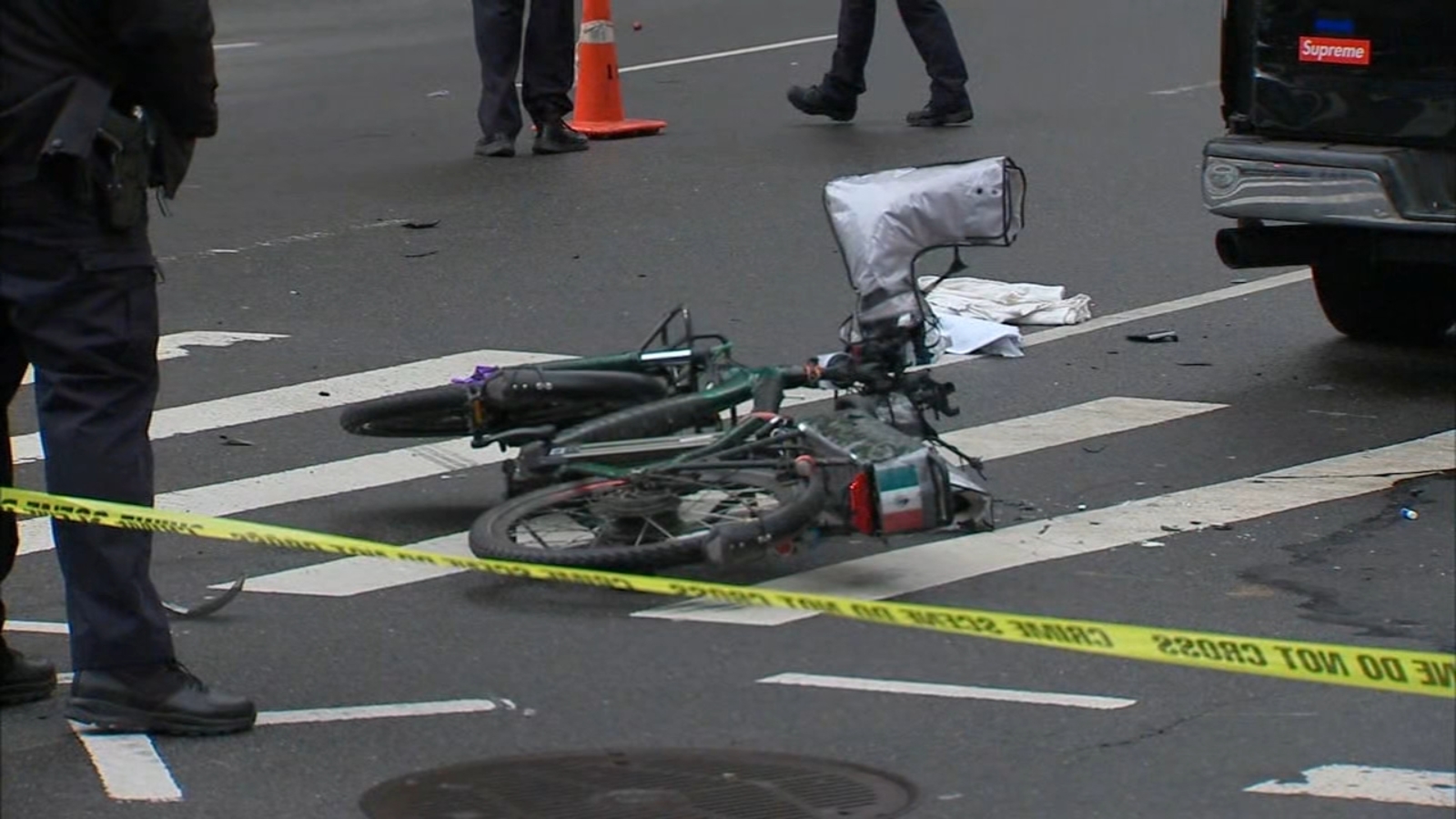 UPPER EAST SIDE, Manhattan (WABC) — A pedestrian and a bicyclist were struck and killed by a truck on the Upper East Side Friday morning.

Authorities say the Baldor Express Transportation truck was traveling west on East 61st Street and hit the two victims while making a right turn onto Third Avenue at 9:21 a.m.

The 66-year-old truck driver stopped at the scene, telling detectives the gas pedal was stuck as the he made the turn.

His truck mounted the sidewalk, struck both the 47-year-old pedestrian and the 37-year-old bicyclist, then continued into a parked car.

The victims were rushed to New York Presbyterian Hospital, where they both died.

He was taken to the precinct to be interviewed, but so far, no charges have been filed.

The bicyclist was a delivery person, and other delivery riders gathered at the scene.

“Drivers are just driving recklessly even more than before,” cyclist Tracey Hinder said. “It’s really scary being a cyclist in the city. It’s gotten scarier over the past year.”

“There’s a lot of times where I’ve almost been run off the road or side swiped by angry drivers,” she said. “And a lot of times I’m invisible to drivers too.”

The accident remains under investigation, but Eyewitness News cameras captured a truck pulling up and blocking the same bike lane the delivery cyclist was riding in before he was struck and killed by the Baldor truck.

ALSO READ | Where to find a COVID test

“I hope the incoming mayor, Mayor Adams, can really do something about this and make the city safer for cyclists and pedestrians,” Hinder said.

A search of the truck’s violation history found that it is based in the Bronx and had 270 violations in the past two years. Almost all of them are parking violations that include parking in crosswalks and bike lanes.

According to Transportation Alternatives, at least 265 people have been killed, including at least 14 delivery workers, in traffic crashes so far in 2021, the most in any of the past eight years.

“We are heartbroken and outraged that traffic violence has claimed the lives of two more New Yorkers this holiday season,” Executive Director Danny Harris said. “On behalf of Transportation Alternatives, we send our condolences to the families of those killed today on the Upper East Side, and to Los Deliveristas Unidos, who have lost another essential member of their community due to traffic violence. As another set of families are destroyed forever due to these preventable crashes, we need our leaders to fast-track proven safety measures, especially on known and dangerous corridors like Third Avenue. This includes redesigning streets for safety, implementing NYC 25×25, and reducing our reliance on deadly, oversized trucks that have no place on dense city streets….We have the tools to end deadly traffic violence. We cannot let another eight years go by without taking all the steps needed to reach Vision Zero.”

Third Avenue was closed between East 61st and East 62nd streets for the investigation but has since reopened.