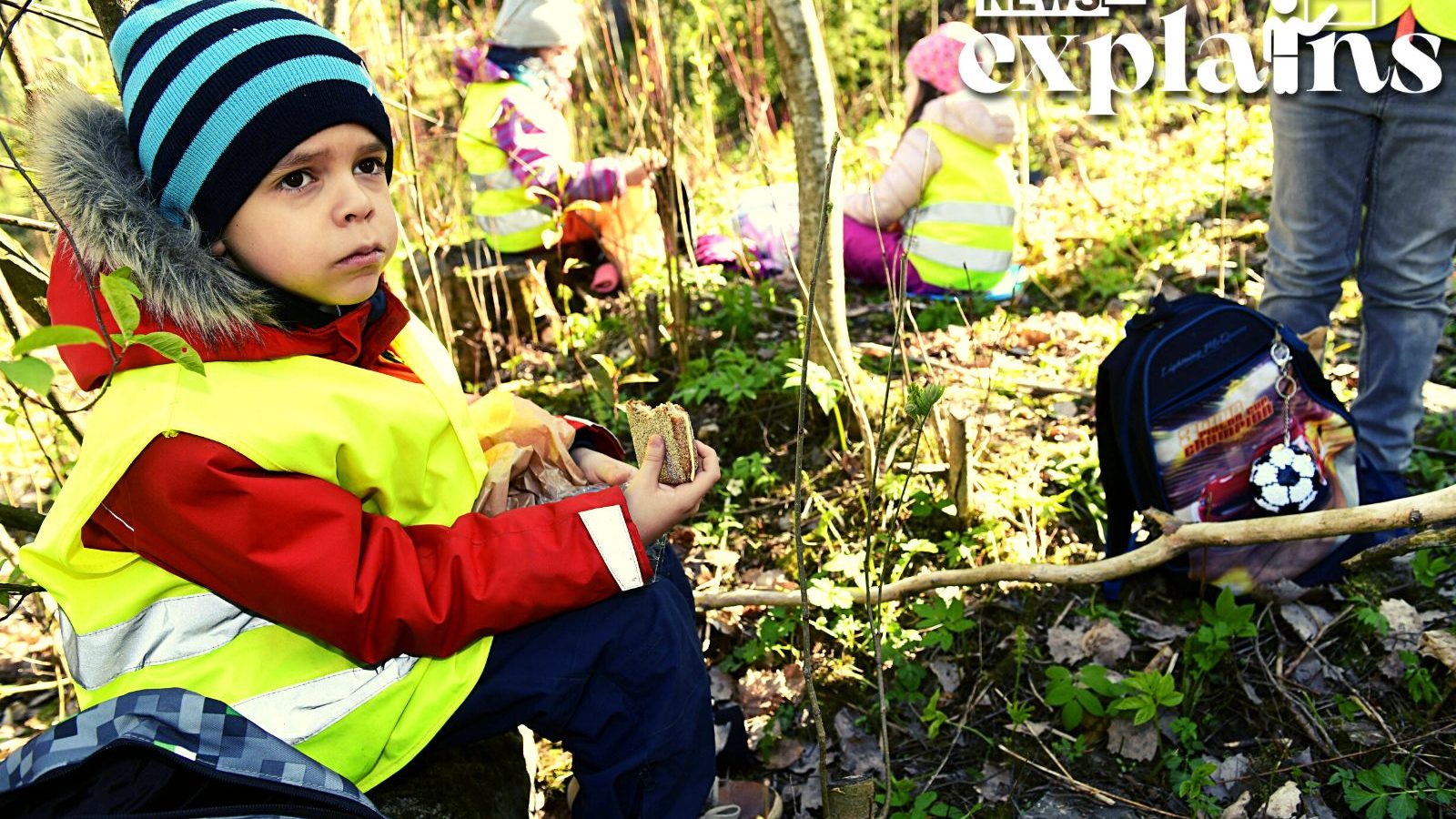 Pupil Mikael and his classmates of the Kirsti primary school have their lessons and lunch outside in a nearby forest. (Image: Reuters)

Explained: The AAP has alleged the LG is holding back permission for a teachers’ training programme to Finland. We learn how the country’s education system is unique

Led by Delhi Chief Minister Arvind Kejriwal and his deputy Manish Sisodia, Aam Aadmi Party MLAs marched to the lieutenant governor’s office on Monday to protest against alleged interference in the functioning of the city government. The march started after the Delhi assembly was adjourned for the day.

“It’s unfortunate that the Delhi chief minister and AAP MLAs have to march to the LG office. I hope the LG will see his mistake and allow teachers training in Finland,” Kejriwal told reporters. He also alleged that Lieutenant Governor (LG) VK Saxena cannot take independent decisions but he is doing that.

The Delhi government’s works are being deliberately impeded for political reasons, Kejriwal alleged and added that “the LG is not our headmaster to check our homework. He has to say yes or no to our proposals”.

How will an elected government function if it has no power to take decisions, the chief minister asked. Assembly proceedings were adjourned after a war of words broke out between BJP MLAs and members of the ruling AAP over “illegal and unwanted obstructions and interferences” by LG Saxena.

AAP MLAs protested against the L-G’s “objections” to sending Delhi government teachers for a training programme to Finland.

What is the Program About?

The Delhi government had sent a proposal to the LG’s office for a training programme for primary-in-charges in Finland.

The AAP says the LG has ‘stopped the file’. The Lieutenant Governor’s office, on the other hand, has denied rejecting any plan and has stated that he only advised the state to conduct a cost-benefit analysis.

Pupils arrive at the Kirsti primary school in Espoo, Finland May 14, 2020. Heikki Saukkomaa/Lehtikuva via REUTERS

How Did This Change Come About

Many school systems are so concerned with increasing test scores and comprehension in math and science, they tend to forget what constitutes a happy, harmonious and healthy student and learning environment. Many years ago, the Finnish school system was in need of some serious reforms, a report by the World Economic Forum explains.

The programme that Finland put together focused on returning back to the basics. It wasn’t about outperforming others or upping the ante. They instead sought to make the school environment more equitable.

Since the 1980s, Finnish educators have prioritised these fundamentals:

Here the Finns again start by changing very minute details. Students begin school at the age of seven. They are given free rein during their developing childhood years so that they are not bound by compulsory education. It’s simply a way to allow a child to be a child, the report says.

Only 9 Years of Compulsory Schooling

There are only 9 years of compulsory school that Finnish children are required to attend. The eighth grade is optional, but the ninth grade is mandatory.

This is a liberating ideal just from a psychological standpoint. Although it may anecdotal, many students really feel like they’re stuck in a prison. Finland alleviates this forced ideal and instead opts to prepare its children for the real world, the report says.

Read all the Latest Explainers here

Rwanda asylum plan: I will defend scheme to Prince Charles –...