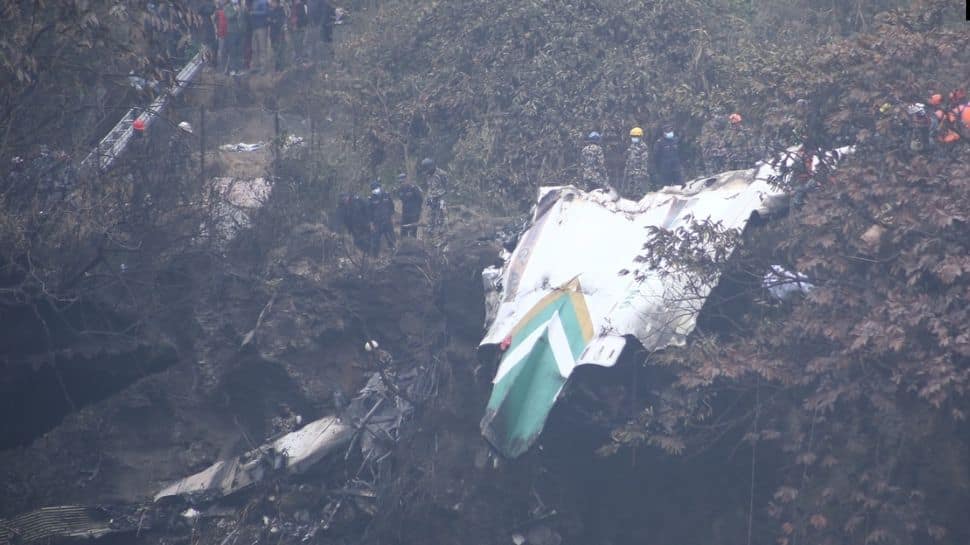 Nepal plane crash claimed the lives of at least 68 out of the 72 people onboard, including five Indians, it crashed into a river canyon as it was making an approach to the recently completed airport in the resort city of Pokhara. On Monday, Nepalese rescuers began their search for the four individuals still missing and found the black box of the plane, as per Sher Bath Thakur’s statement to ANI. It is to be noted that the black box will play a major role in the investigation of the crash.

Yeti Airlines’ 9N-ANC ATR-72 aircraft took off from Kathmandu’s Tribhuvan International Airport at 10:33 am and crashed on the bank of the Seti River between the old airport and the new airport minutes before landing, according to the Civil Aviation Authority of Nepal (CAAN). The bodies of people who died in the air crash will be handed over to their respective family members on Monday, MyRepublica newspaper reported.

The report added that the Assistant Chief District Officer (CDO) of Kaski, Anil Shahi said that the bodies that have been identified will be handed over to the respective families after completing due procedures.

Assistant CDO Shahi said that the remaining bodies could not be pulled out of the gorge due to the difficult topography of the crash site. The rescue work in the Seti gorge was withheld due to geographical constraints last night and has resumed this morning, Shahi said.

According to Tek Bahadur KC, Kaski Chief District Officer, security personnel from the Nepal Army, the Armed Police Force, and the Nepal Police, and locals are attempting to pull out the bodies, The Kathmandu Post reported.

“A hearse and an ambulance are on standby to hand over the bodies. The bodies of foreigners, deceased from Kathmandu, and unidentified bodies, will be sent to Kathmandu,” said KC.

Sixty-eight passengers and four crew members were on board the aircraft. The five Indians, all reportedly from Uttar Pradesh, have been identified as Abhisekh Kushwaha, 25, Bishal Sharma, 22, Anil Kumar Rajbhar, 27, Sonu Jaiswal, 35, and Sanjaya Jaiswal.

Of the five Indians, four were planning to participate in paragliding activities in the tourist hub of Pokhara, a local resident who travelled with them to Nepal, said. The runway of Pokhara International Airport is 45 metres wide and 2,500 metres long, and its designation is 12-30. The ill-fated plane commanded by Captain Kamal KC, an instructor pilot, made the first contact with the Pokhara control tower from nearly 110 kilometres away.

“The weather was clear. We allocated Runway 30, which is the eastern end. Everything was fine,” Anup Joshi, spokesperson for Pokhara International Airport, was quoted as saying by the Kathmandu Post newspaper. He added that no problems had been reported.

“At 10:32 am, the plane took off from Kathmandu. It was scheduled to land at Pokhara at 10:58 am. I was in continuous contact with Pokhara Tower. The landing clearance of that plane had also been obtained. The weather was also fine. Everything was fine then how the accident happened is a matter of investigation,” said Premnath Thakur, General Manager, Tribhuvan International Airport, Kathmandu.

“A high-level investigation team has been formed. Any conclusion can be drawn by checking its voice recorder and other circumstances,” Thakur said. The flight captain later asked for permission to switch to Runway 12, which is the western end. “We were not sure why. Permission was granted, and accordingly, the aircraft started its descent,” said Joshi, who is also a senior air traffic controller.

The government has formed a five-member probe committee to investigate the crash. The probe panel headed by former aviation secretary Nagendra Ghimire has been asked to investigate the accident and submit its report within 45 days, said government Spokesperson and Finance Minister Bishnu Prasad Paudel on Sunday.

Pokhara, the tourist hotspot, lies between two rivers, the Bijayapur and the Seti, which makes it a perfect habitat for birds. Excellent for sightseers, of course, but a terror for pilots. Flight tracking website FlightRadar24 claimed that the Yeti Airlines aircraft was 15 years old and equipped with an ‘old transponder with unreliable data.’

According to Nepal’s civil aviation body, 914 people have died in air crashes in the country since the first disaster was recorded in August 1955. The Yeti Airlines tragedy in Pokhara on Sunday is the 104th crash in Nepali skies and the third biggest in terms of casualties.

Nepal has had a fraught record of aviation accidents, partly due to its sudden weather changes and airstrips located in hard-to-access rocky terrains. According to data from the Aviation Safety Network, Sunday’s accident was the third-deadliest crash in the Himalayan nation’s history.

The only incidents in which more people were killed took place in July and September 1992. Those crashes involved aircraft of Thai Airways and Pakistan International Airlines and left 113 and 167 people dead, respectively.

The last major air accident in Nepal happened on May 29 when all 22 people on board, including four members of an Indian family, were killed as a Tara Air plane crashed in Nepal’s mountainous Mustang district.

In 2016, all 23 people aboard were killed when a plane of the same airline flying the same route crashed after takeoff. In March 2018, a US-Bangla Air crash occurred at the Tribhuvan International Airport, killing 51 people on board.