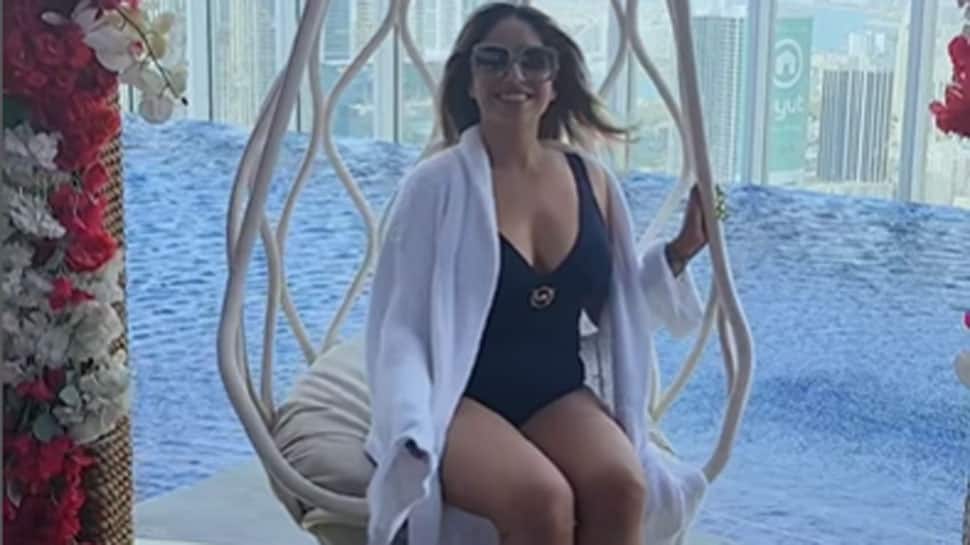 New Delhi: Singer Neha Bhasin has several chartbuster tracks to her credit. And her popularity rose to new heights after she appeared in Bigg Boss OTT season 1 followed by Bigg Boss 15 respectively. The stunner is bold and beautiful with her choices, giving major style goals to fans. She has never really shied away from speaking her mind and is also known for calling a spade a spade.

Neha who is currently in Dubai shared a video from her plush hotel where she is seen enjoying the pool time. The terrific singer wrote: Too windy to swim but perfect to pose  Dubai is cold brrrr #nehabhasin. She is wearing a black swimsuit with a white bathrobe to cover it up as it’s too windy and cold. Check out her Dubai diaries:

Ahead of the New Years’, she shared an adorable picture with hubby Sameer Uddain, where the two can be seen sharing a passionate kiss on the lips. The singer is dressed in a pretty floral short dress while her hubby in casuals.

In 2021, Neha Bhasin was featured on Times Square Billboard as artist of the month on Spotify for her song ‘Oot Patangi’. She has crooned many hit numbers in Hindi, Telugu and Punjabi including Dhunki, Chashni, Paani Ravi Da and Jag Ghoomeya to name a few.

Earlier this month, in her interview with Hindustan Times, she talked about trolls and how it affects her. “Just because I don’t tell my story like a victim doesn’t mean I laid on a bed of roses with no thorns. You never feel you might hit rock bottom at this age, but you can. And people think rock bottom means financial but it can be emotional too. The (last) year was tough because I suddenly lost sense of who I was. I was physically present in public but I wasn’t there mentally.”