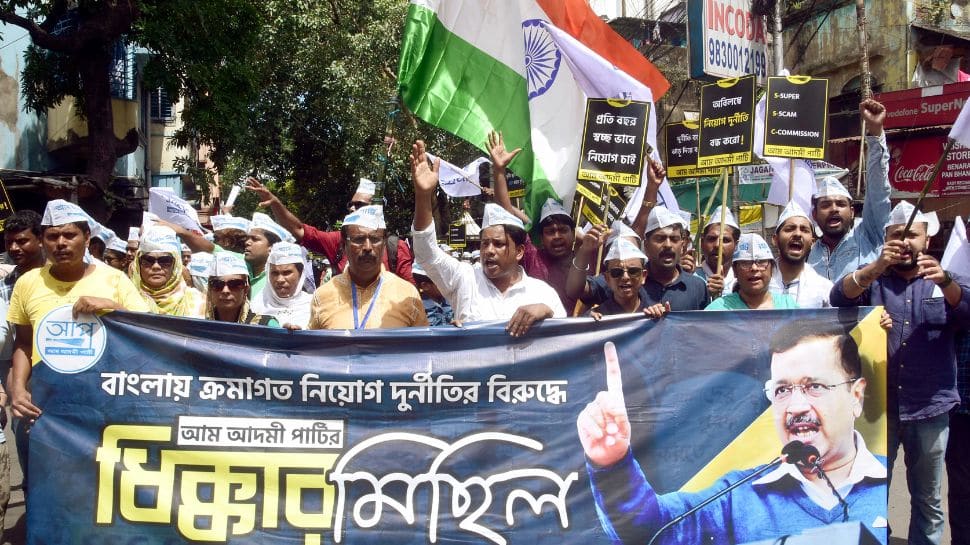 New Delhi: The West Bengal unit of the Aam Aadmi Party protested against the Mamata Banerjee-led state government over the school jobs scam on Sunday (August 7). The AAP supporters hit the streets in Kolkata with placards reading ‘Durnitir Sarkar Aar Nei Dorkar’ (don’t want this corrupt governement) to rally against the West Bengal government. As many as 2,000 AAP workers marched from Ramlila Maidan to the Mahatma Gandhi statue on Mayo Road, covering a distance of 2 km.

The protests come in the wake of the Enforcement Directorate (ED) arresting now-suspended West Bengal minister Partha Chatterjee and his aide Arpita Mukherjee in connection with the case of alleged irregularities in the recruitment drives by the School Service Commission (SSC). The TMC also suspended Partha Chatterjee from the party as well as removed him from all party posts including General Secretary and National vice president.

“After the arrest of a TMC heavyweight and the recovery of huge amounts of cash from the two flats of his female friend, this government has no moral right to stay in power for a single day. Our big rally is raising the demand once more,” a Bengal AAP leader was quoted as saying by PTI.

Meanwhile, on August 5, a special court in Kolkata sent former Bengal education minister Partha Chatterjee and his aide Arpita Mukherjee to 14 days in judicial custody. Both the accused will be produced on August 18, the next date for the hearing, special PMLA court judge Jibon Kumar Sadhu said.