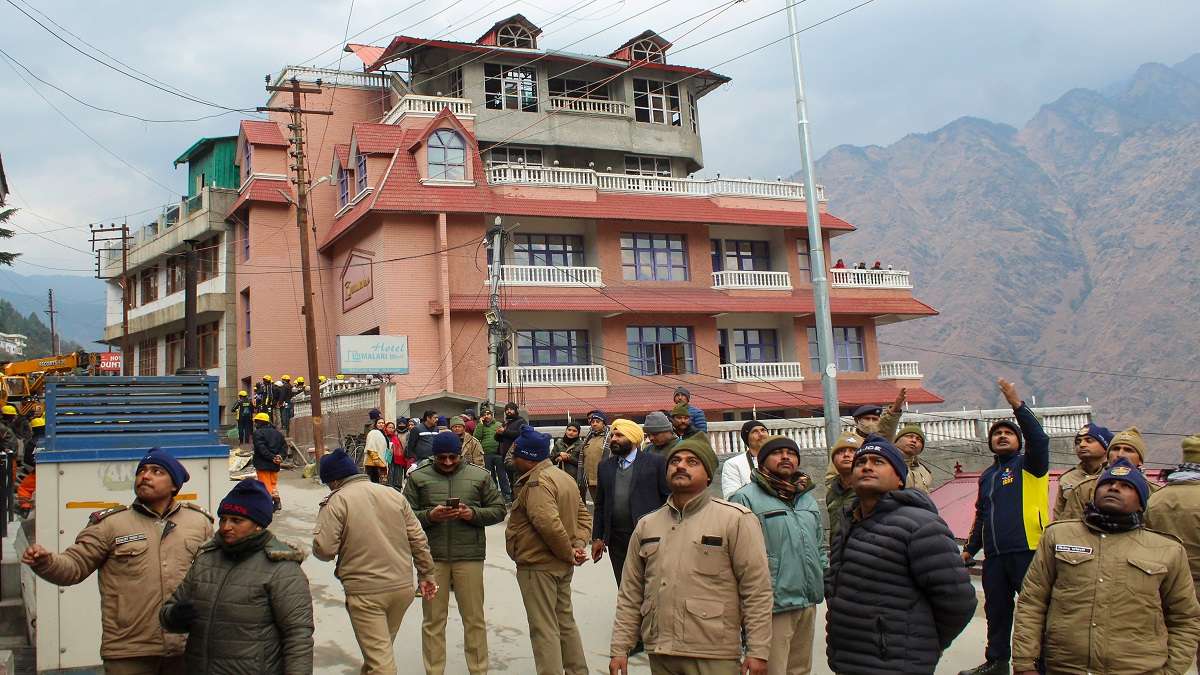 Joshimath crisis: Two more hotels were dangerously leaning towards each other while wider cracks appeared near Auli ropeway and in other areas of land subsidence-hit Joshimath on Sunday. Also, the flow of water increased from a suspected underground channel burst in JP Colony in the Marwari area of the town after a temporary decline a couple of days back. Muddy water has been percolating down from it constantly since January 2 but experts are not sure about its origins.

Disaster Management Secretary Ranjit Kumar Sinha said a constant vigil is being maintained on the pace of water percolation in the area which has been fluctuating. The process of demolishing two adjacent hotels Malari Inn and Mount View which were declared unsafe was still underway. Around 100 metres from the site, two more hotels – Snow Crest and Comet – have tilted dangerously towards each other and have been vacated as a precautionary measure.

“The gap between the two hotels was around four feet earlier but now it has narrowed to just a few inches with their roofs nearly touching each other,” Puja Prajapati, daughter of Snow Crest owner, said. Wider cracks have appeared near the Joshimath-Auli ropeway whose operation was suspended over a week ago when land subsidence aggravated.

The 4.5 km ropeway, considered one of Asia’s largest, connects Joshimath located at 6000 ft with the skiing destination of Auli at an altitude of 9000 feet.

A crack around four inches wide and 20 feet long has appeared near the walls in the ropeway premises, ropeway engineer Dinesh Bhatt said. A hotel owner in Singdhar ward said the cracks in the area widened on Saturday night.

The water flow from an unknown source in the Marwari area has increased from 190 Litre Per Minute (LPM) to 240 LPM. It had decreased from 550 LPM in the beginning to 190 LPM on January 13.

Many houses were damaged in varying degrees in the land-subsidence areas while water from the aquifer was constantly flowing down with great force. Amid widespread concern over the fate of the sinking town, the Supreme Court is scheduled to hear on Monday a plea seeking the court’s intervention to declare the crisis in Joshimath as a national disaster.

According to the cause list of January 16 uploaded on the apex court website, a bench comprising Chief Justice D Y Chandrachud and Justices P S Narasimha and J B Pardiwala would hear the petition filed by Swami Avimukteshwaranand Saraswati.

Several state-run institutions including ISRO have been directed by the National Disaster Management Authority (NDMA) and the Uttarakhand government not to interact with media or share information on social media on the Joshimath situation without prior approval. The direction came after satellite images released by the Indian Space Research Organisation showed the rapid rate of subsidence in Joshimath between Dec 27 and January 8, fuelling concerns over the situation, even as

Uttarkhand Minister Dhan Singh Rawat said on Saturday that the ISRO images have been withdrawn. Meanwhile, special prayers were offered by locals at Nrisingh temple in Joshimath on Sunday to save the town from the land subsidence crisis, a former official of Badrinath temple Bhuvan Uniyal said.

A yagna was performed at the temple by local people praying for the town to emerge unharmed from the current crisis, Uniyal said.

The Rawal or head priest of the famed Badrinath shrine, Easwaraprasad Namboothiri, also urged authorities to stop the projects that harm nature and the people of the hilltop town.

Covid-19 Still a Public Health Emergency of International Concern: WHO

“I’d Rather Die Than Tie Up With BJP Again,” Says Nitish Kumar

I live in people’s hearts, no one can throw me out:...