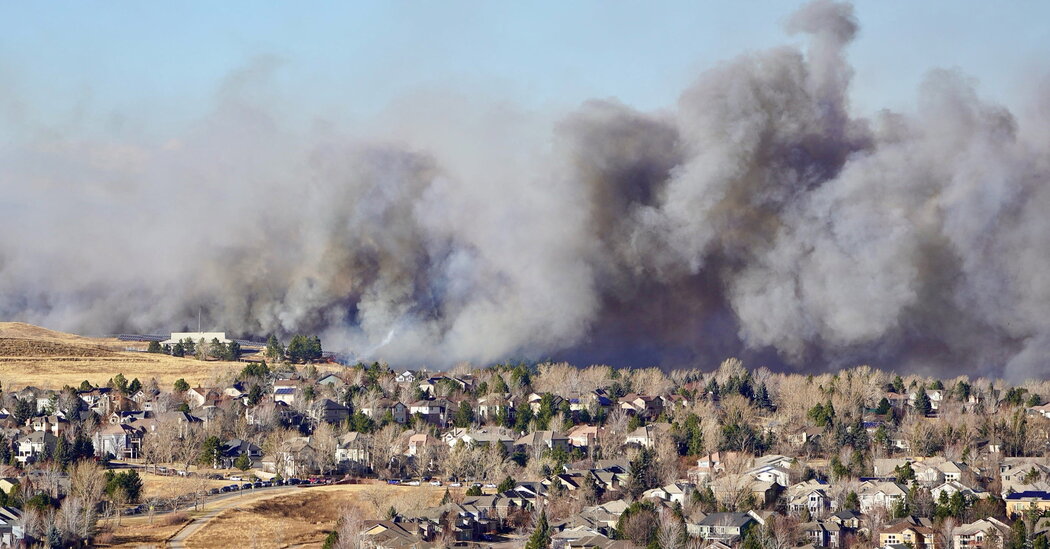 Colorado officials continued to assess the damage on Friday from a wind-swept wildfire that tore through suburban neighborhoods between Denver and Boulder the prior afternoon. The fire, which forced tens of thousands of people to evacuate and which turned the sky into an ashy orange, was estimated to have burned more than 500 homes, more than any other blaze in the state’s history.

The fire, as intense as it was sudden, sent residents of Boulder County scrambling to leave department stores and houses on Thursday as fire trucks swarmed the area. Though wildfires are seen as less of a threat in suburban areas, especially in December, a period of intense drought had created the conditions for the flames to spread, destroying houses, a shopping complex and a hotel.

“It felt like the apocalypse,” said Ruthie Werner, a resident of Louisville, Colo., who had gone to shop at a Target store but arrived to find the parking lot ablaze.

Residents of Louisville and Superior had been ordered to evacuate on Thursday, along with some people in nearby Broomfield and Westminster. There were no immediate reports of deaths or serious injuries, but Sheriff Joe Pelle of Boulder County said Thursday that he would not be surprised if victims were discovered. The authorities were expected to provide an update later Friday.

“This fire is, frankly, a force of nature,” Gov. Jared Polis said Thursday, adding that wind gusts of up to 110 miles per hour had pushed the fires with astonishing speed across suburban subdivisions. “For those who have lost everything that they’ve had, know that we will be there for you to help rebuild your lives.”

Evacuees fled the fire zones under plumes of smoke that clouded the sky for miles on Thursday, not knowing if their houses would make it through the night. Roads and highways in the Denver metro area were jammed with thousands of residents trying to flee.

“It took us almost an hour to get out of our neighborhood — it was complete gridlock,” said John Stein, who was walking his dog in Superior when he saw smoke in the area and heard sirens.

Thomas Maxwell, 25, said he did not know on Thursday if his parents’ house in Louisville was still standing. Mr. Maxwell, who lives in California, had been dog-sitting for them while they vacationed in Spain. He woke them with a midnight call to say that he had evacuated to a hotel with their two dogs.

“It was crazy how fast it happened,” Maxwell said. “I read about wildfires in California all the time. Now I’m experiencing it. It’s so different.”

Wildfires in the American West have been worsening — growing larger, spreading faster and reaching into mountainous elevations that were once too wet and cool to have supported fierce fires. What was once a seasonal phenomenon has become a year-round menace, with fires burning later into the fall and into the winter.

Recent research has suggested that heat and dryness associated with global warming are major reasons for the increase in bigger and stronger fires, as rainfall patterns have been disrupted, snow melts earlier and meadows and forests are scorched into kindling.

Colorado had the three largest wildfires in its history in the summer of 2020, each one burning more than 200,000 acres, Mr. Polis said. But those fires burned federally owned forests and land, he said, while the fires on Thursday destroyed suburban developments and shopping plazas.

“As a millennial, I’m just looking outside and I’m seeing climate change,” said Angelica Kalika, 36, of Broomfield. “I’m seeing my future. I grew up in Colorado, and this is a place where I’ve had snowy Christmases and a nice 60-degree summer. But, for me, this is a moment of deep reckoning of climate change when there is a wildfire outside my door.”