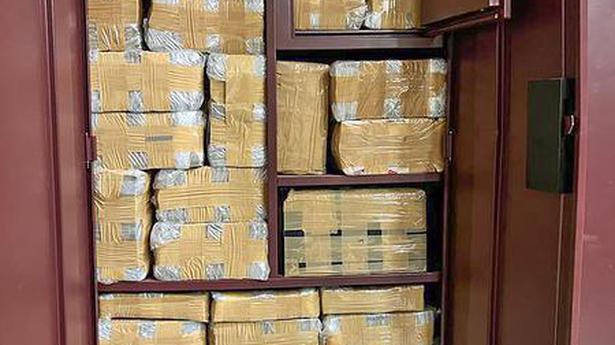 An official said that during a series of raids on the premises owned by Piyush Jain, cash worth over ₹257 crore as well as gold and silver was recovered

The GST Intelligence zonal unit of Ahmedabad had initiated the search operations at Odochem Industries, manufacturer of Shikhar brand paan masala and tobacco products, at Kanpur on December 22.

As per the details shared by the Director General, GSTI, ₹177.45 crore cash was found from the factory and business premises of Odochem at Kanpur while ₹17 crore in cash and 23 kg of gold were found from the residential premises at Kanauj in Uttar Pradesh.

Since the gold bars recovered from Mr. Jain’s residence bear foreign markings, the Directorate of Revenue Intelligence (DRI) has been roped in for further probe besides the Income Tax department since the recovery of ₹194.45 crore cash is the largest in the history of the Central Board of Indirect Taxes (CBIC).

The money was allegedly generated through the dispatch of goods via fake invoices and without e-way bills by a goods transporter.

Mr. Jain has been arrested and was produced before court where the authorities have got his 14-day custody. He will be brought to Ahmedabad for further probe.

Additional Director-General Vivek Prasad in a statement said that during interrogation, Mr. Jain had accepted that the cash recovered from his premises was related to the sale of goods without paying the Goods and Services Tax (GST).