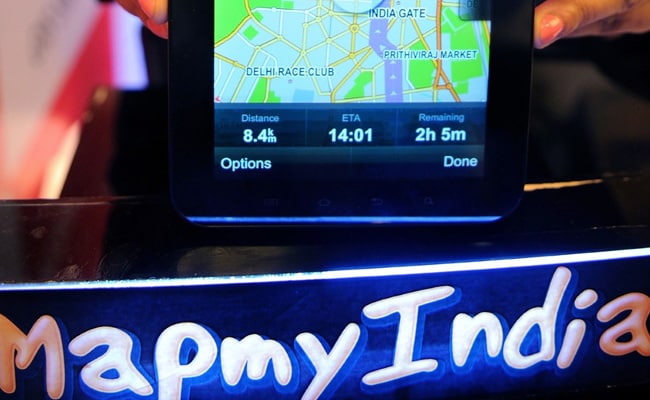 More than two decades ago, when Rakesh and Rashmi Verma decided to create digital maps of India, the couple were treading new terrain, quite literally. Long before Google revolutionized web cartography, the Vermas traversed India’s mega-cities by foot, painstakingly charting streets and landmarks.

But the mammoth task of building their company, MapmyIndia, paid off Tuesday. The Vermas’ startup met with resounding success during its trading debut after its initial public offering. The stock rose around 35 per cent to 1,393.65 Indian rupees ($18.4), pushing the couple’s net worth to about $586 million. It was a fittingly bold start for a company that sells digital maps and geographic data covering India’s challenging topography.

A strong market debut punctuates several recent highs for MapmyIndia, formally known as C.E. Info Systems Ltd. Earlier this month, the company reported it had received bids for more than 150 times the number of shares on offer in its initial public offering. Apple Inc. and Amazon.com Inc. are among those that have purchased the company’s software.

The husband-and-wife team, who own nearly 54 per cent of the company post-IPO, are the latest founders to strike gold during this year’s stock market boom. India’s startups, in particular, are having a moment, buoyed by strong pandemic-driven demand for e-commerce and online services. Home-grown businesses such as MapmyIndia have led the surge in new fundraisings, setting IPO records and pricking the ears of investors looking for the next big market in Asia.

“Nobody understood mapping data when we started,” Rakesh said in a telephone interview before the listing. “Now, 25 years on, mapping data pervades businesses, industries, government-owned companies and ministries,” he said.

The startup reported a 31 per cent profit margin for the last fiscal year, with revenue of 1.92 billion rupees ($25 million) and net profit of 594.3 million rupees. Its profit margin reached 46% for the first two quarters of the current year, ending in September.

Rakesh, 71, and Rashmi, 65, started their company in the mid-1990s, when businesses had little interest in buying mapping data. At that time, public internet access had not been introduced in India. Startups had yet to define the culture of today’s tech havens, including Bengaluru and Gurgaon.

As the field of entrepreneurs deepened in India, the Vermas stood out for their staying power. Rashmi drives the technology wing of the business, serving as its chief technology officer. Rakesh was instrumental in expansions into sectors ranging from automotive to government-owned companies.

Their skill-set was sharpened abroad. In the late 1970s, after graduating from elite engineering schools in India, the Vermas headed to the U.S., where they completed graduate degrees and launched successful corporate careers. Rakesh climbed the ranks at General Motors Co. Rashmi built computer databases at International Business Machines Corp. When the couple returned to India, they identified a niche in digital mapping, which had started to catch on in the developed world.

At that time, “databases were tabular, data was thought of in megabytes and there was no internet,” Rashmi said. C.E. Info Systems was incorporated in February 1995.

The couple said the first few years of mapping India were more or less a nightmare. Rakesh often joined surveyors on the streets of Mumbai, where the team manually recorded addresses. As technology improved, triangulating data helped capture further flung corners of the country.

The gamble paid off. Barely a year after starting the business, Coca-Cola Co. hired the Vermas to chart their distributorships, which for many years had been demarcated by vague markers such as “along a river” or “next to a highway.” Motorola, Ericsson AB and Qualcomm Inc. followed suit, contracting the company to build map terrains and locate their mobile towers. In 2004, Rakesh and Rashmi unveiled India’s first interactive maps platform.

“Our data modeling is our key IP and that’s what gives us a head start in this field,” Rakesh said. “We’ve mapped 99.99% of India, capturing every city, town, village and habitation.”

Globally, Google Maps dominates the consumer segment of the market, with more than one billion users, far more than its competitors. The app is bolstered by high brand recall and the advantage of having its software pre-installed on Android devices.

MapmyIndia, by contrast, has excelled by selling licenses to the biggest automakers, including BMW AG and Daimler AG’s Mercedes Benz, and to marquee global brands such as McDonald’s Corp. Many of the Vermas’ clients are also local startups, including Paytm, the digital payments platform, and Ola, a popular ride-sharing company. Qualcomm, Zenrin Co. and Flipkart, now owned by Walmart Inc., are among the startup’s investors.

Taking the business public was a logical next step after the Indian government changed rules this year over gathering mapping and geographic data. The new measures compel foreign companies to buy data directly from Indian-owned ones, providing another buffer for MapmyIndia to capture the local market and turn would-be competitors like Apple Maps — which uses the startup’s software — into customers. Across India, the company says it has a 95 per cent market share of GPS navigation.

With the cash infusion, the Vermas plan to expand after integrating maps for more than 200 countries into their software platform. But the couple said Tuesday’s success would have no bearing on their lifestyle. They have no plans to travel or move from their home in a leafy Delhi suburb. Their half-hour commute to company headquarters on the city’s outskirts will continue.

“My work and my family, including the four grandkids, are my enduring passion,” Rashmi said. “Nothing changes.”

One thing is clear: Demand for geographic data is soaring. The Indian government has projected a $14 billion market by the end of the decade, reflecting one of the fastest growth rates in the world. Rakesh can’t help but marvel at how things have come together.

“We are profitable, our future revenues are predictable and our valuation is easy to arrive at,” he said.

Hope to start supply of ZyCoV-D vaccine by mid to end...