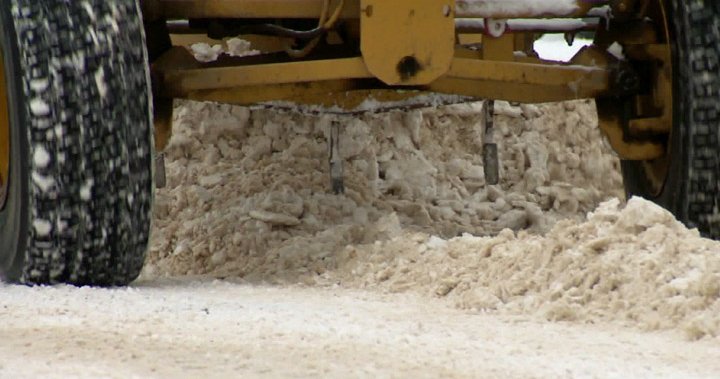 Saskatoon’s city council was faced with four options Tuesday morning with regard to finding a way to fund this year’s snow removal efforts, which resulted in cuts and a tax levy.

Chief financial officer Clae Hack gave a report to council, noting that snow removal as a result of the emergency response plan could cost the city as much as $20 million.

The report then posed four options to council:

Administration recommended the final option, noting that a 0.75 per cent increase each year for four years could create an $8.4-million reserve by 2029 that could be used for service level improvements.

“We forecasted for an average snowfall experience, which I think is six to seven snowfall events greater than five centimetres, obviously we experienced much greater than that, so we need to come up with a strategy to fund that,” Hack said.

Coun. Darren Hill wondered what happened to the dedicated 0.55 per cent snow allotment that was added to the mill rate in 2016, noting that the gradual increase wasn’t continued.

Administration didn’t have the exact details of how that money was used or why the gradual increase wasn’t continued, just that it was being used to improve service levels.

Coun. David Kirton asked how much a 0.75 per cent increase in the mill rate each year would affect a household in Saskatoon, with administration saying it would cost the average household about $14.95 per year.

Coun. Randy Donauer asked what the current budget for snow and ice removal in Saskatoon was, which administration said was in the $14-million range.

It was also noted that typically any extra money left over from that reserve gets saved and goes back into snow and ice removal the next year, but Hack noted that they’ve faced a few deficits over the past couple of years.

Recession will be ‘deeper’ than first thought, but job loss will be minimal: Deloitte

Jeffries said he was interested in the third option, noting that councillors should be thinking about the mill-rate number and the impacts of inflation.

“That’s something I think that we should be thinking about here as well, in terms of maybe we don’t ask for more dollars from folks, and from households and from businesses,” Jeffries said.

He added that the city needs to reorganize what it is doing.

Hill said if the tax levy went through, a yearly report would be needed to make sure we knew where every penny was spent.

“We have to make sure that our business lines are properly funded moving forward, and not going back to the citizens over and over again,” Hill said.

Kirton noted that the city needs to stop ignoring the fact that these snow events happen in Saskatoon.

After a long debate, the city came to the decision to merge two of the options, cutting back capital spending until 2035, as well as implementing a 0.75 per cent property tax levy.

Administration will report at a future date on the exact details of the plan.