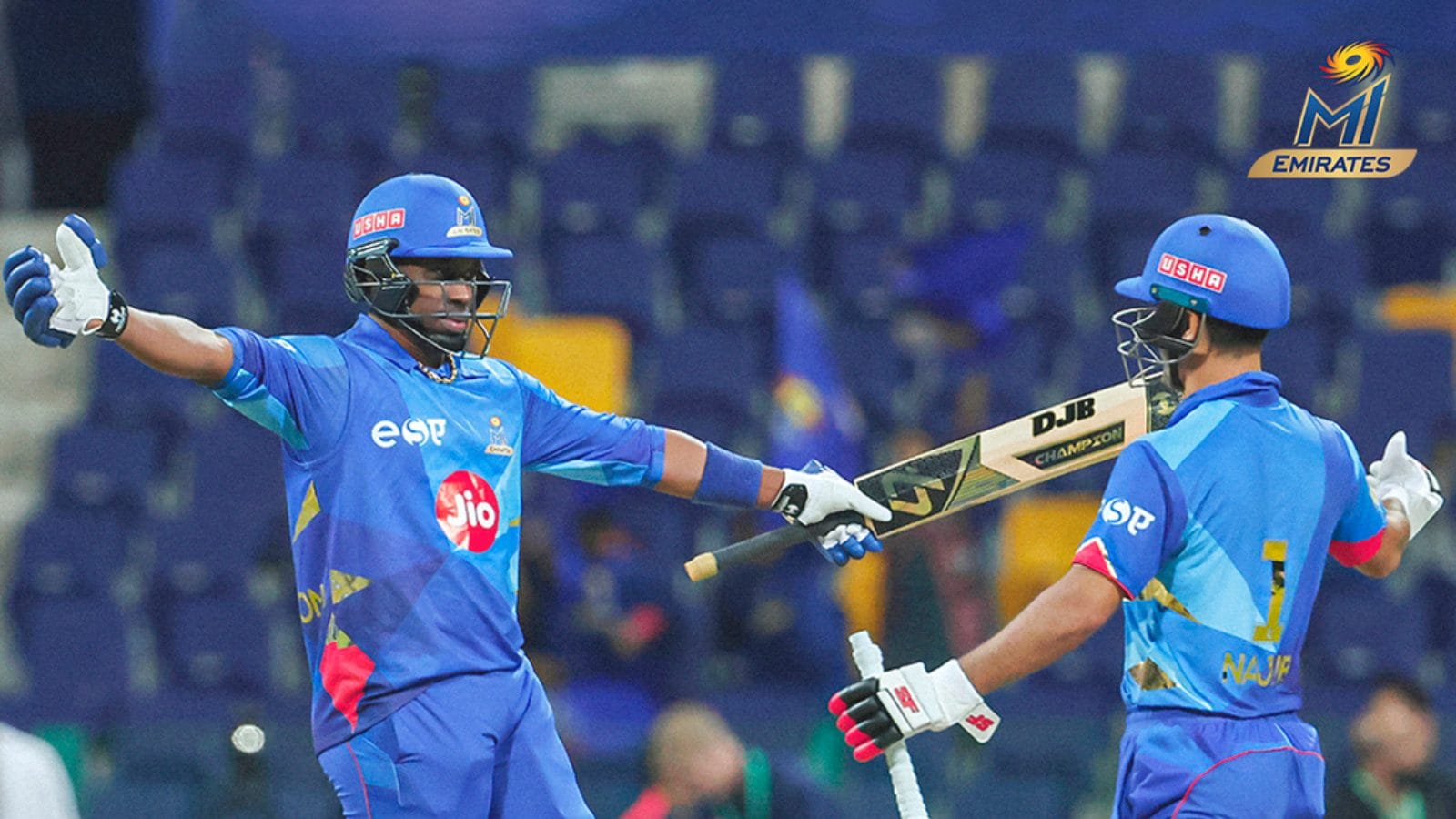 The Abu Dhabi Knight Riders put up a strong total of 170 for seven, riding on the brilliant innings of 65 runs from 40 balls by Dhananjaya de Silva. In reply, the MI Emirates were in a spot of bother when they needed 20 runs off the last over.

Abu Dhabi: The MI Emirates kept their winning run intact in the DP World International League T20 after pulling off a thrilling five-wicket over Abu Dhabi Knight Riders at the Zayed Cricket Stadium.

The Abu Dhabi Knight Riders put up a strong total of 170 for seven, riding on the brilliant innings of 65 runs from 40 balls by Dhananjaya de Silva. In reply, the MI Emirates were in a spot of bother when they needed 20 runs off the last over. However, Dwayne Bravo and Najibullah Zadran batted smartly and took their team over the line.

The MI Emirates lost Muhammad Waseem early on in the innings for two runs off seven balls, but Andre Fletcher kept them in the game with three boundaries off Lahiru Kumara in the fourth over. Pooran and Fletcher put up a crucial stand of 55 runs and kept the MI Emirates’ chase on track until Pooran fell to Russell in the eleventh over for 20 runs off 13 balls.

The MI Emirates’ chase was further derailed when Lahiru Kumara trapped Andre Fletcher LBW for 53 runs off 43 balls. Pollard smacked Akeal Hosein for two boundaries, but the MI Emirates were still behind in the game at 129 for four at the end of the seventeenth over.

The Abu Dhabi Knight Riders seemed to have sealed the deal when Pollard departed for 31 runs off 23 balls in the 19th over, however, Dwayne Bravo and Najibullah Zadran had other ideas. They struck Russell for three sixes and a four in the final to take their team to a thrilling victory.

Trent Boult achieved an early wicket for the MI Emirates after he dismissed Kennar Lewis for a duck in the very first over. However, Dhananjaya de Silva set the tone for the Knight Riders as he smashed four boundaries off Fazalhaq Farooqi in the fourth over. But Dhananjaya kept losing partners at the other end with Brandon King falling to Zahoor Khan for six runs off 13 balls in the fifth over and Raymon Reifer run out in the eight over, leaving the Abu Dhabi side at 48 for three.

Charith Asalanka provided much-needed support to Dhananjaya as he smashed two sixes off Imran Tahir in the eleventh over and a four off Kieron Pollard in the twelfth over. Just when it looked like the Abu Dhabi Knight Riders’ innings was going to take off at another level, Pollard got Asalanka caught out for 23 runs off 17 balls, bringing an end to a 45-run stand between Dhananjaya and Asalanka.

Andre Russell came in and struck a six and a four off Zahoor Khan, but his stay at the crease was short-lived as Fazalhaq Farooqi sent him packing for 13 runs off eight balls. Dhananjaya kept going strong at the end, but he too was on his way back when he fell to Zahoor Khan for 65 runs off 40 balls. Thereafter, captain Sunil Narine played an important cameo of 28* off 18 balls, which included a six and a four off Zahoor Khan in the final over, to take his team to a competitive total of 170 for seven.

Speaking about the thrilling match, MI Emirates’ Andre Fletcher said, “It was an intense match. I told Pooran in the dugout that if we need 20 runs off the last over, we will win it. This performance shows the depth in our batting. It’s good to be on the winning side and we have to continue the momentum.

Meanwhile, Abu Dhabi Knight Riders’ Dhananjaya de Silva said, “It’s hard to lose games consecutively. We could’ve scored a few more runs in the latter part of our innings. It was a good wicket to bat on and a score of 185-190 would have been the ideal score to defend for us.”