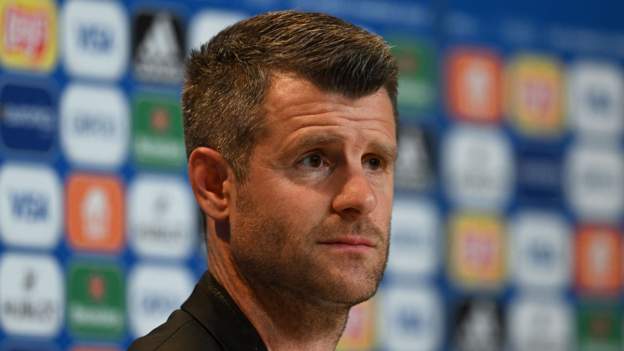 The intensity and passion Jens Scheuer will bring to English football began in a village in south-west Germany.

Scheuer’s earliest full coaching job came in 2010 at Bahlinger SC, an amateur regional league team formed almost a century ago in an agricultural area with a population of little more than 4,000.

It was the start of a career that has taken in record points hauls, a near-invincible title win and an eight-goal thriller with Chelsea in the Women’s Champions League semi-finals.

Now the first German manager in the WSL has his sights on transforming Brighton & Hove Albion.

‘He is a motivator’

As a teenager, Scheuer had been a trainee at SC Freiburg under then youth coach Christian Streich, whose current 11-year reign as manager of the club’s men’s team is by far the longest in the Bundesliga.

Scheuer never appeared for Freiburg and spent most of his playing days with Bahlinger, but he was inspired by meeting Streich again at a Christmas party years later.

Streich was able to tell Scheuer exactly when he worked with him, his position and subsequent clubs – and Scheuer resolved to make such meticulousness a hallmark of his own.

“Jens did everything at this club,” Dennis Buhrer, the current Bahlinger manager who Scheuer signed as a player in 2011, told BBC Sport.

“As well as being the coach, he brought the balls, did the video analysis, everything. At a small club in a small village, it’s difficult. But for his development, it was very good.

“He is a motivator because he wants to win every time. I learned from him that I want to win every training game and every match at the weekend.

“We won the first game under him 11-1. Then we thought we were the best club in the division. A lot was expected of us – too much.”

‘We had to work hard’

Authenticity is key for Scheuer. He admires the extroversion of Megan Rapinoe, Miroslav Klose’s down-to-earth sense of fun and the increasing willingness of players to take a stand on issues such as homophobia.

He has admitted that he discounted working in the women’s game after seeing a farcical handball go unpunished during the 2011 World Cup, then felt “immediately annoyed” for being “so negative” when he watched Freiburg women play.

Scheuer became a Frauen-Bundesliga manager for the first time when Freiburg appointed him in 2015, leading a team including Germany forward Lina Magull to third place – their highest ever finish – in 2017-18, as well as the DFB-Pokal cup final a year later.

When Bayern Munich secured his services, Scheuer oversaw the end of Wolfsburg’s four-year stranglehold on the title.

Bayern had finished eight points behind Wolfsburg in Scheuer’s first season in charge. By the end of his second, they held a 19-goal superiority over the vanquished champions, scoring 82 times and conceding nine while losing once in 22 matches.

“He has a lot of self-confidence,” said Buhrer, who remains close to Scheuer and chuckles at his friend’s appetite for English lessons in recent years.

“He will coach a lot. Sometimes he is very emotional. We had to work hard.

“I expected his success because he is very professional and he does everything for football. That’s why he is coming to Brighton.

“It’s a big chance for him to do everything, every day, every hour for football. It’s exactly his thing.”

Deep conversations – and revenge over Chelsea?

Scheuer has learned to relax, says Buhrer. The 44-year-old enjoys mountain walks, being a self-confessed bad loser at tennis and occasional glasses of wine – although much of his recent spare time appears to have been focused on Brighton’s status as the WSL’s most porous side.

The Seagulls made four signings in four days at the start of January, bringing in defenders Zoe Morse and Guro Bergsvand alongside midfielders Dejana Stefanovic and Brianna Visalli.

Scheuer wants “deep conversations” and “close connections” with his players, who will be used to his high-intensity sessions by the time of a kind-looking first fixture for their new manager at bottom side Leicester on Sunday.

He is also preoccupied by changing the culture of the club, so that dropping points against the likes of Chelsea and Arsenal would be considered a cause for profound dissatisfaction.

Victory over Chelsea, Scheuer has said, is a priority – and he is only half-joking because of the painful memory of his last meeting with the WSL leaders.

Bayern won the first leg of their Champions League semi-final against Emma Hayes’ team in 2021, only falling behind for the first time in the tie in the 84th minute of the return game at Kingsmeadow.

“I like talking with him about football,” says Buhrer, pondering Scheuer’s strategy. “He wants to play good football first – not only long balls and kick-and-rush.

“He’ll want to watch and look at Brighton’s situation. He can adapt. He’ll decide what the best philosophy is for Brighton.”