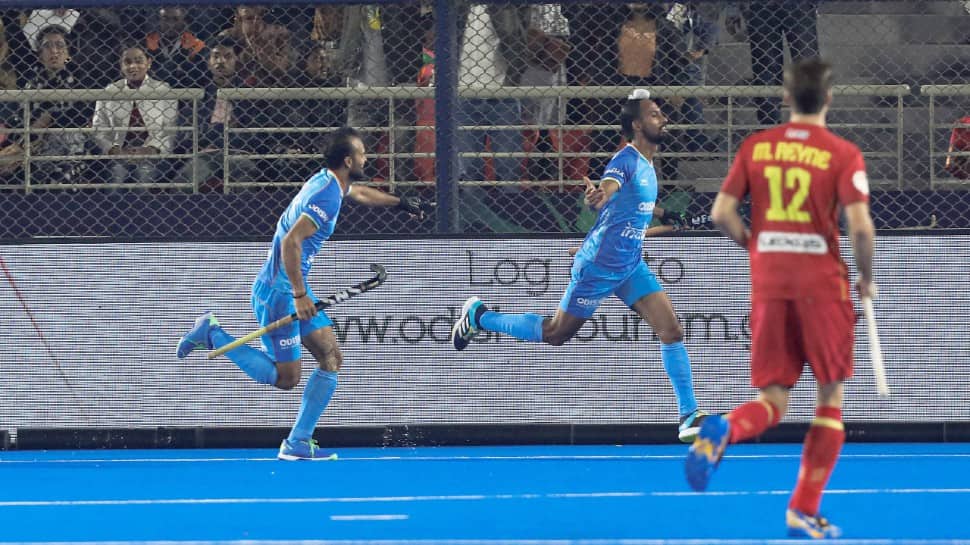 The Indian hockey team began their FIH Men’s Hockey World Cup 2023 campaign with an impressive 2-0 win over Spain 2-0 in their opening Pool D match of the tournament at the Birsa Munda Hockey Stadium, on Friday.

Amit Rohidas (13`) scored India`s opener in the first quarter while Hardik Singh (27`) netted India`s second goal. The win takes India up to the second place in Pool D standings behind England, who beat Wales 5-0 in the other Pool fixture earlier in the day.

Both teams started the match on equal footing and the first 10 minutes ebbed and flowed with the two teams dominating phases of the game. However the final few minutes of the first quarter saw India take control and capitalise with an all-important first goal.

After captain Harmanpreet Singh`s shot was blocked by the Spain defence, Amit Rohidas latched onto the loose ball and drove his shot past a helpless Adrian Rafi in the Spanish goal to score India`s first goal of the Hockey World Cup 2023. It was also India`s 200th goal in the tournament. Only Australia, the Netherlands and Pakistan have scored more.

What an energizing performance by all of the players! The first day at the Birsa Munda Stadium was packed with joy, passion, entertainment, and enthusiasm. #HockeyIndia #IndiaKaGame #HWC2023 #StarsBecomeLegends @CMO_Odisha @sports_odisha @IndiaSports @Media_SAI pic.twitter.com/dTFU40h4Zs
— Hockey India (@TheHockeyIndia) January 13, 2023

Spain increased their attacking intent to try and restore parity but India goalkeeper Krishan Bahadur Pathak pulled off some fantastic saves to keep India`s lead intact. India also created opportunities of their own and found a second goal from a counter attack.

Hardik Singh broke in pace and showed some stunning three dimensional skills to weave past four defenders. His attempt at goal from a tight angle took a deflection off a Spanish defender and rippled the net. India took a 2-0 advantage into the half-time break.

Shortly after the restart, Akashdeep Singh won India a penalty stroke but Harmanpreet`s shot from the spot was just about snuffed on the line by Adrian Rafi. India came close to scoring a third on several occasions in the third quarter, including from two Harmanpreet PCs, but the scoreline remained 2-0 heading into the final quarter.

India were dealt a blow early in the final quarter after Abhishek was shown a yellow card. The 10 minute suspension reduced India to 10-men and allowed Spain some leeway. However, the Indian team defended diligently to see the match off. India will play England next on Sunday.