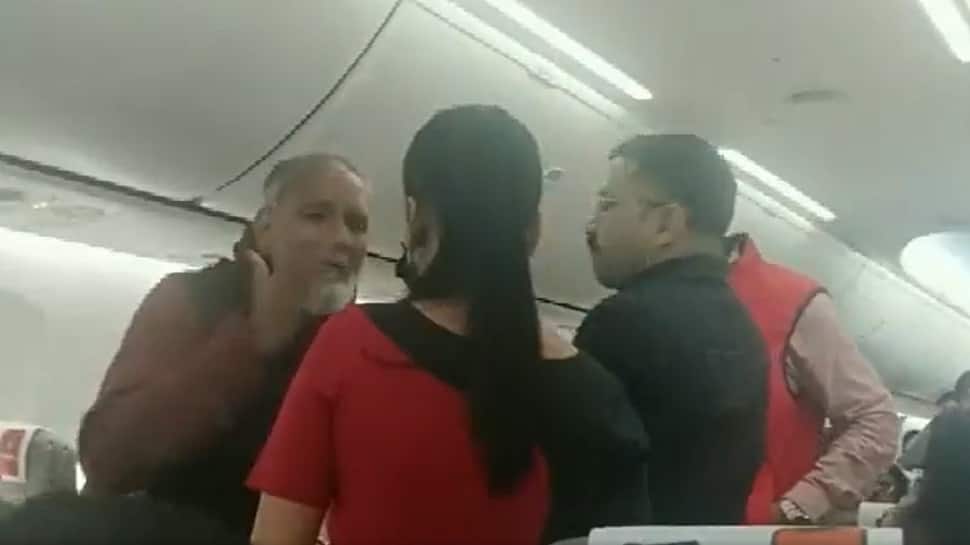 Yet another ‘Unruly & inappropriate’ behaviour by a passenger on a flight has been reported and recorded on camera. As per initial details, on January 23, 2023, an elderly passenger and SpiceJet cabin crew got into a heated argument, a portion of which was shared on video by ANI. The reason for the heated argument is not clear yet. The incident happened on Delhi-Hyderabad SpiceJet flight SG-8133 at the Delhi Intenational Airport. As per SpiceJet, after boarding, an elderly passenger and his co-passenger behaved in an unruly and inappropriate manner. They were deboarded and handed over to the security team at the airport.

The passenger and & a co-passenger were deboarded and handed over to the security team at the airport pic.twitter.com/H090cPKjWV
— ANI (@ANI) January 23, 2023

“On January 23, 2023, SpiceJet wet-leased Corendon aircraft was scheduled to operate SG-8133 (Delhi – Hyderabad). During boarding at Delhi, one passenger behaved in an unruly & inappropriate manner, harassing and causing disturbance to cabin crew”, said SpiceJet in a statement.

As seen in the video, a SpiceJet flight attendant is seen talking to the elderly passenger and saying, “she is crying”. Replying to which, the elderly say, “Hindi mein bolo.” A couple of passengers get up to pacify the situation. The full details of the incidents are not known yet.

“The cabin crew informed PIC and security staff about the incident. The said passenger and a co-passenger, who were travelling together, were offloaded and handed over to the security team” SpiceJet spokesperson added.

The number of altercations and unruly behaviour on flights in India has witnessed a steep rise in the recent past. On November 26, 2022, a passenger on New York-Delhi Air India flight relieved himself on an elderly woman passenger sitting in the business class of the flight. The incident drew sharp reactions in the media, resulting in the arrest of accused Shankar Mishra.

In another incident, an IndiGo flight attendant on Istanbul-Delhi flight was seen arguing with a passenger. A video also surfaced from Thai Smile Airways showing fistfight between two parties on Bangkok-Kolkata flight.

Economic Survey 2023: These Are The Drivers Of Economic Growth