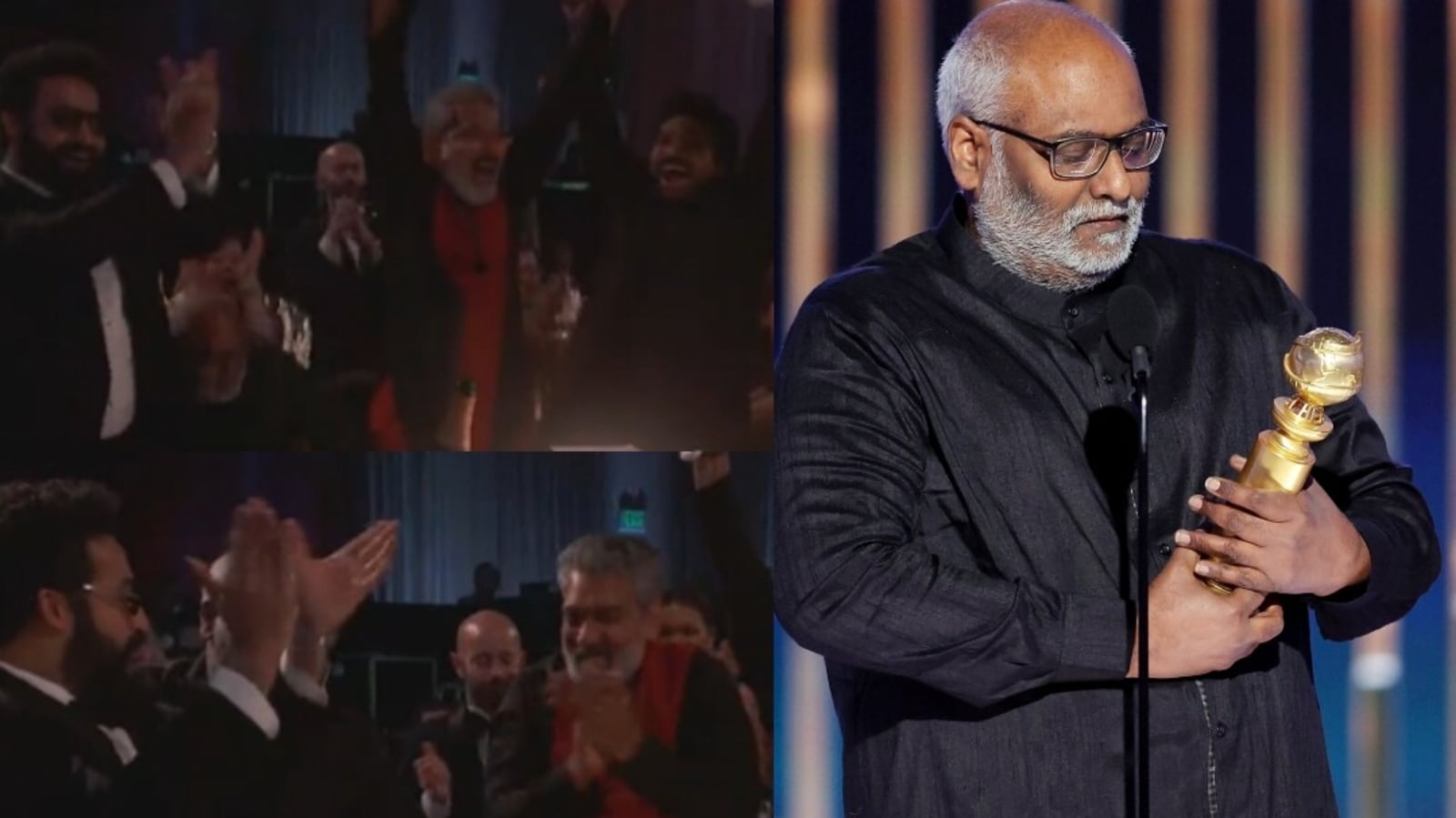 The song Naatu Naatu from the Telugu film RRR made history as it won Best Original Song at the 80th Golden Globes. The hit number beat out songs from singers Taylor Swift and Rihanna. When it was announced that Naatu Naatu, and RRR, were the winners, director SS Rajamouli and actors Ram Charan and Jr NTR all leapt out of their seats and raised their hands in joy on the win. Their jubilant reaction was captured on camera as the whole table celebrated composer MM Keeravaani. (Also read: MM Keeravani makes history with first Golden Globe win for Naatu Naatu, thanks ‘brother’ SS Rajamouli)

The official handle for the film shared the video on Twitter with the caption, “And the GOLDEN GLOBE AWARD FOR BEST ORIGINAL SONG Goes to #NaatuNaatu #GoldenGlobes #GoldenGlobes2023 #RRRMovie.” The accompanying video shows Rajamouli and the lead actors’ happy celebration as the movie picked up its first Golden Globe win. Ram and NTR are both dressed in black, while Rajamouli wore an Indian outfit with red dupatta. NTR’s wife Lakshmi Pranathi and Ram’s wife Upasana were also present at the table.

Actor Jenna Ortega, who plays Wednesday Addams on Netflix’s web series, announced the category. The trio also cheered on the composer as he made his way to the podium. Several fans, both Indian and international, congratulated the team and the film on its historic win. Fans also shared gifs of the stars dancing in the replies as well.

One fan wrote, “Wow (wow emoji) #nattunattu wins Golden Globe award (okay, thumbs up and clapping emojis) Proud moment for Indians. I hope this give that much need motivation to all Indian artist and movie makers. Congratulations #RRR.” The twitter handle for Beyond Fest, where the film was screened over the weekend, replied, “Legendary.”

It was a mixed bag for the team as they won one award but lost out on another. The film was also nominated in the Best Non-English language Film category but lost out to Argentina, 1985 for the award. The cast and crew attended their first big Hollywood awards ceremony together and still have the upcoming Oscar nominations to look forward to. Naatu Naatu is also shortlisted for the Oscars in the song category, and many are expecting the film to pick up several other awards as well.

Deborah James: My body can't continue, says You, Me and the...