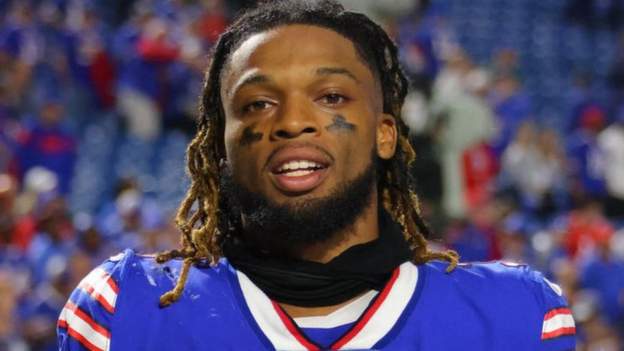 Damar Hamlin has attended the Buffalo Bills’ play-off game against the Cincinnati Bengals, just 20 days after he suffered a cardiac arrest.

The Bills safety was resuscitated on the field after collapsing during the penultimate game of the regular season, also against the Bengals.

Hamlin was discharged after nine days in hospital has continued his recovery.

And the 24-year-old visited his team-mates before Sunday’s divisional round game at a snowy Highmark Stadium.

Television pictures showed Hamlin riding in a utility vehicle and being driven to the door of the locker room shortly before kick-off.

However, the Bills got off to a poor start, with the Bengals charging into a 14-0 lead in the first quarter.

Hamlin saw his team-mates for the first time since his collapse last Saturday and, since then, coach Sean McDermott said he has visited the team facility “almost daily”.

Joe Biden Expected To Decide On Afghan Evacuation Deadline In 24...