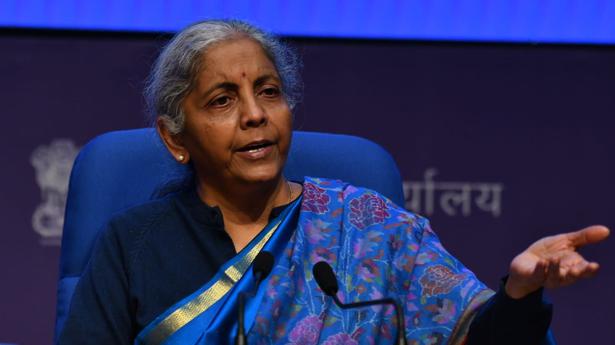 Currently, tax rate on manmade fibre (MMF) is 18 per cent, MMF yarn 12 per cent, while fabrics are taxed at 5 per cent.

The 46th GST Council meeting was chaired by Union Finance Minister Nirmala Sitharaman and the State counterparts, in New Delhi on December 31, 2021.

Addressing a press conference after the meeting, Ms. Sitharaman said “It was a brief meeting. There was only one agenda. It was triggered off by a letter which was written to me by the Gujarat Finance Minister, requesting for reconsideration of the September 2021 decision taken in the Council.”

The Union Finance Minister added “Textile was the only issue of discussion…the Council’s decision was that we maintain status quo and not go to 12% from 5%… But since it’s an issue of inversion, several ministers also spoke about what are the long term ways in which Council is going to look at in correcting these things.”

She said “There is already a committee which looks at rate rationalisation. Today in the meeting it was decided that Textile will again be also put to the committee for review along with other items. And submit a report by February… Post that we have a Council meeting where the committee’s report on every item, including textile, will be discussed.”

Currently, tax rate on manmade fibre (MMF) is 18 per cent, MMF yarn 12 per cent, while fabrics are taxed at 5 per cent.

The Council in its previous meeting on September 17 had decided to correct the inverted duty structure in footwear and textile sectors.

With effect from January 1, 2022, all footwear, irrespective of prices, will attract GST at 12 per cent. It was also decided that 12 per cent uniform GST rate wold apply on textile products, except cotton, including readymade garments. States like Gujarat, West Bengal, Delhi, Rajasthan and Tamil Nadu have said they are not in favour of a hike in Goods and Services Tax (GST) rate on textiles to 12 per cent, from 5 per cent, with effect from January 1, 2022.

Amit Mitra, advisor to West Bengal Chief Minister, had earlier urged the Centre to roll back the proposed tax rate hike on textiles, saying this would lead to closure of around 1 lakh textile units and 15 lakh job losses.

Delhi Airport’s Eastern Cross Taxiway to be ready by December 2022,...