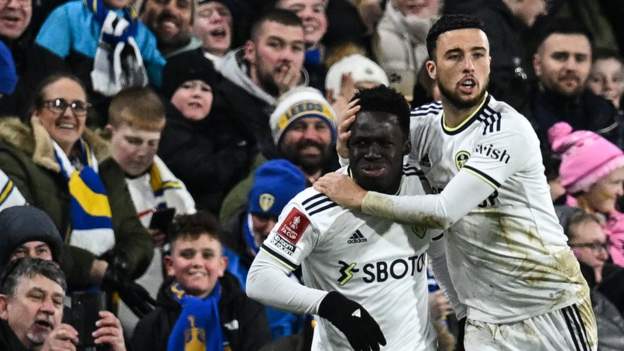 Wilfried Gnonto struck twice – including one of the goals of this FA Cup season after just 26 seconds – as Leeds hammered Cardiff in a replay to reach the fourth round.

The Italian international – a summer deadline-day signing from FC Zurich – scissor-kicked a stunning volley in off the crossbar from Rodrigo’s precise chipped ball to set the Whites on their way to a fully deserved victory.

Gnonto, 19, also netted the home side’s third, slotting in low to take the game away from Cardiff shortly after Rodrigo had made it 2-0 with a cool finish of his own.

Cardiff, led by interim manager Dean Whitehead following the sacking of Mark Hudson, thought they had reduced the deficit but Curtis Nelson’s header from a corner was ruled out when VAR spotted Andy Rinomhota in an offside position.

Leeds, who had fallen at the third-round hurdle in this competition in every campaign since 2016-17, added two more in the second half through Patrick Bamford. The striker made it three goals in two substitute appearances since he returned from injury.

Jesse Marsch’s side will travel to fifth-tier Boreham Wood or League One Accrington Stanley in round four on the weekend of 28/29 of January.

Those two sides were due to meet in a third-round replay on Tuesday, but this was postponed because of a frozen pitch, with the rescheduled game set to take place on Tuesday, 24 January.

Gnonto the shining light for Leeds

Leeds United don’t do home FA Cup ties, at least not in recent years. This was their first since January 2016 and only because they salvaged a late draw in Wales 10 days ago.

A sell-out crowd was testament to how long these fans have waited for the world’s oldest cup competition to return to LS11 and they were treated to something special before many of them had taken their seats.

When Gnonto joined Leeds, boss Marsch suggested he was “not Premier League ready”, but from the moment he stepped onto a pitch in England he has set about proving the American wrong.

His first goal was something out of the highest of drawers – an audacious and superbly-executed volley in mid-air – similar to that performed by another Italian Paulo di Canio for West Ham against Wimbledon in 2000, albeit from closer range.

Gnonto’s second was a more routine finish, but underlined the brilliant anticipation, movement, speed and maturity of a player that is rapidly making his £4m fee look an absolute steal.

Sandwiched between the two was another fine goal from Rodrigo, who saw his tag as Leeds’ record signing taken away by the capture of Georginio Rutter last week, but now has 12 goals in 20 games this season.

If Rutter can live up to the hype, a forward line of the 20-year-old Frenchman, the experienced Spaniard and teenage Italian, with Englishman Bamford competing with them, promises much for Leeds in the second half of the season.

Wednesday’s victory was most significant for boss Marsch, who has come under increasing pressure following a run of just two victories in 17 games.

The Whites looked to be finding form before the World Cup break, but they have struggled for consistency since the restart, with performances showcasing some encouraging attacking play but dire defensive lapses costing them points.

This was the case in the original tie in Wales, in which Leeds were the better side over the entirety of the game but had to rely on a second-half comeback from 2-0 down and an injury-time equaliser from substitute Sonny Perkins to force a replay.

This was a much more confident display, following on from the high-energy attacking effort they demonstrated at Aston Villa on Friday but with less of the naive defending.

It wasn’t perfect, with chances wasted and the offside flag sparing blushes following the failure to effectively clear the corner from which Nelson headed in just before half time.

But it is something on which to build ahead of what is an even more crucial game – and bigger test – for the Whites and their manager at home to Brentford in the Premier League on Sunday.

Cardiff were second best, but at least left with something on the board through Robinson’s double – and can now fully focus on their own dire league situation.

In between the two cup ties with Leeds, they sacked manager Mark Hudson after just 118 days in charge following nine games without victory.

That run is now into double figures and needs to be arrested quickly, whether it is Whitehead still in charge for the league visit of Millwall on Saturday or not.