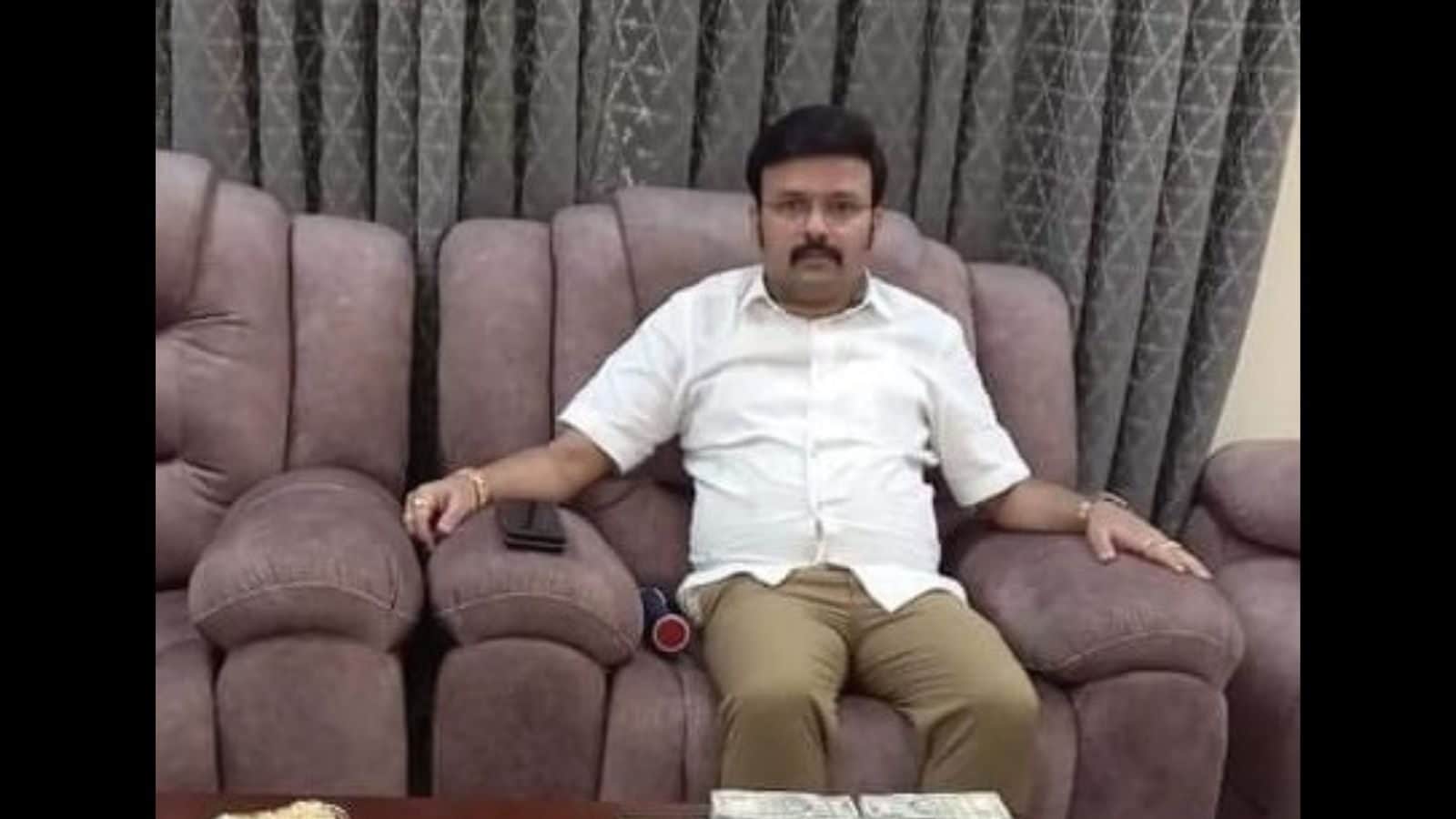 If you thought Jaguar, Mercedes, and BMW only referred to high-end cars, you may have never heard of Santro Ravi — a human trafficker whose code names for women of various nationalities, modelled on different kinds of vehicles, has left the authorities in a daze.

An expose by former Karnataka chief minister HD Kumaraswamy has put Santro Ravi on Page 1 of newspapers amid a verbal war between the JDS and the BJP.

In yet another explosive allegation against Ravi, the JDS leader claimed that Santro Ravi had written a covering letter addressed to the Rajarajeshwari Nagar Police Station in Bengaluru claiming to be an active worker of the BJP.

Kumaraswamy elaborated that a complainant by the name of Jagdish had filed a case against Santro Ravi at the RR Nagar police station alleging a money transfer fraud. Ravi, in return, wrote a scathing letter to the police, flaunting his political affiliations. Ravi also bragged about how he could transfer police officers and even named a few of them in this covering letter, the former chief minister said, reading the alleged letter in his possession.

“I have worked as a BJP worker for three-four years. I have associations with MLAs and ministers of our party. So I have transferred many officers,” said Kumaraswamy, quoting Santro Ravi from the alleged letter.

A source in the police, while speaking to News18 on the condition of anonymity, said: “We have seen him hobnobbing with top politicians and ministers across political parties in the last decade. Ravi had become very powerful as a fixer in the government. Though his illegal operations were largely out of Mysuru, he would use the politicians to get himself off the hook when a police case was filed against him. He would also supply women to politicians, industrialists and high-profile customers and then keep them in his books for future use.”

Over the years, Ravi began to step up his game by “honey trapping” or blackmailing his high-profile clients to get his work done, including transfer of police officers.

A senior BJP minister said leaders such as Kumaraswamy were raising such unnecessary issues to divert attention. “He is not clean as a whistle and clearly has things to hide. But one should not forget that if you spit in the air, it will hit your face,” the minister warned.

A major political slugfest is now afoot in Karnataka. However, political pundits respond with a firm ‘no’ when asked if it will have any political impact at a time when the state is heading towards elections.

Political analyst Sandeep Shastri believes that political parties try to use such methods as elections near. “I think the voter in Karnataka has a better understanding of what factors make him vote in favour of a particular party. I don’t think they will be swayed by such episodes. Political parties may use these to remain in the headlines, but as you say in journalism, the voter will read the fine print. They will read between the lines,” Shastri told News18.

Originally from Karnataka’s Mandya district, KS Manjunath alias Santro Ravi was the son of a former official in the state excise department. Ravi, the police say, has been actively operating as a human trafficker since 1995. A senior official said his first brush with the law was in 1988 when he is said to have forcibly kidnapped a minor girl, raped her, and tried to cover it up by taking her to Dharmasthala to marry her. He was arrested a few days later, but escaped from the Mysuru-based KR hospital, feigning illness.

After remaining underground, Manjunath — who had not yet got the name Santro Ravi — went around promising women jobs and then pushing them into human trafficking.

The then newly launched Santro car was his carrier from which he would conduct his illegal trafficking business and soon Manjunath came to be known as ‘Santro Ravi’.

“Around the year 2000, the car Santro had become very popular and Manjunath owned one. It was literally his mobile office and all the dealings would take place in it,” revealed SK Umesh, a senior retired ACP who had tracked Ravi’s human trafficking ring and filed cases against him.

“The Santro car was new in the market and he drove it with pride. He would drive it really fast and escape from the police when they would reach any location for a raid,” Umesh told News18.

Ravi’s operations slowly shifted from Mysuru to Bengaluru city and he began supplying women from various other states and countries for private parties, News18 learnt.

As part of his modus operandi, he gave code words to the countries from where the women belonged, explained Umesh. “He would call women from Kazakhstan Mercedes Benz as they were tall and slender. Those from Malaysia and Singapore were called Audis. He had separate terms like Jaguars and BMW for those he bought in Bangladesh and the Northeast,” he said.

Umesh said Ravi’s network was powerful and ran deep. In the past five to six years, he became completely ‘un-touchable’ to the police force as well, say officers.

Several cases were registered against Santro Ravi between 2010 and 2014 for running a prostitution racket, said officials of the Odanadi Seva Samsthe, a Mysuru-based NGO working to expose such illegal trafficking rings.

“Ravi had links with several rowdy gangsters in Bengaluru and was very well connected. He would get prior information that the police were going to raid his operation and would go underground — only to resurface with a new powerful connection,” the officer added.

Recollecting an incident from 2005, Umesh spoke about Ravi getting arrested in Mysuru for human trafficking. “He was arrested at night and there was enough evidence against him. However, by morning, things changed and allegations were made against the local inspector for having detained Ravi at night,” he said.

Umesh added: “The police officer was suspended because Ravi had pulled strings to make it look like the police had violated the law. It was argued why Ravi was not picked up in the day and his rights had been violated. Such was his pull.”

Those who have come close to seeing how Ravi operates say his interactions with ministers began to increase in the last few years. He would be seen walking with prominent ministers, attending events with them and would also often post photographs with them.

“He would use these photographs to show how powerful he was and use it to threaten to transfer police officers,” said the retired cop.

Some of these photos were recently released on social media by the Opposition, putting the ruling BJP in a spot. Ravi’s photos and links with ministers from the Basavaraj Bommai cabinet like state education minister BC Nagesh, state home minister Araga Jnanendra, health minister DK Sudhakar, and even Bommai’s son Bharath, were released by Kumaraswamy.

Bommai, however, rubbished the photographs as ‘doctored’.

Apart from photographs, Kumaraswamy also released an audio purportedly of a conversation between a police officer seeking a transfer and Ravi. In the audio, Ravi purportedly says: “Even the chief minister calls me sir. You are just a deputy superintendent. The word sir is what should come out of your mouth while addressing me.” The source of the audio is not known and the police are investigating the same.

On an expose spree, Kumaraswamy also released a video purportedly showing Ravi talking to minister for cooperation ST Somashekhar. The JDS leader alleged that Ravi, who is a rape accused and has several cases of human trafficking against him, supplied women to the ‘Mumbai Team’ — the group of Congress turncoat MLAs who were holed up in a five-star hotel in Mumbai during the peak of the Karnataka political crisis in 2019.

Somashekhar hit back at Kumaraswamy, claiming he was making such statements as he was scared of losing the upcoming assembly elections.

Police officials who are in the hot pursuit of Ravi believe that the accused may be in possession of audio and sex tapes involving influential persons and use it to gain political leverage. “He has used it before to extort top businessmen, why will he stop there?” asked a police official on condition of anonymity.

The Karnataka police have launched a manhunt to track and arrest Ravi. A working theory as revealed by a police source has been that he could have fled to the Andamans. A police team has been sent there to find him.

A lookout circular has been issued against Ravi who is an accused in a rape and atrocity case to prevent him from escaping the country, said Additional Director General of Police (Law and Order) Alok Kumar who is expected to be stationed in Mysuru until Ravi falls into the police net.

Four special teams of police have been formed and dispatched to places such as Chamrajanagara, Mysuru rural, Mandya, Ramanagaram, Bengaluru rural, and city limits to trace the accused. Having frozen his bank accounts and also raided his home in Rajarajeshwari nagar, the police have begun tracing his digital footprint to track his movements.

Karnataka DGP Praveen Sood, while speaking to News18, said there are 21 pending cases against Ravi in Karnataka and the hunt for him is in full swing.

“We have issued a lookout notice for him,” Sood said, recalling how he had also booked Ravi when he was the Mysore police commissioner in 2005.

“He was a woman trafficker and would solicit them, trap them and even rape them. There were a lot of cases against him, most of which were for exploiting women and fraud. As the commissioner of Mysore, I had booked him under the Goonda Act on July 4, 2005, for one year,” the top cop said.

The recent case which has the Karnataka police is looking for him is after an internal investigation of the police revealed that Praveen, an inspector attached to the Cottonpete Police Station, had allegedly colluded with Ravi to file a false case of dacoity against two women. A case was filed against a non-existent finance company owned by Ravi and both women were sent to 20 days judicial custody in Bengaluru’s central jail.

One of the women, on being released from jail, told the police that she was Ravi’s wife. She said he had forced himself on her and later began living with her. She later alleged that Ravi would take objectionable videos and photographs to blackmail her. She added that he had threatened to file a false case against her if he did not cooperate and that landed her in jail.