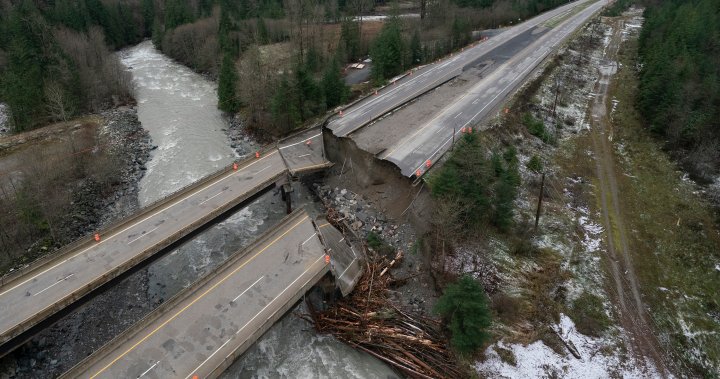 From a woman appearing to be asleep at the wheel to what one researcher called “un-hoax-able” evidence of Bigfoot, Global BC is counting down its top 10 videos of 2021.

0:28SPCA seizes dog strapped to back of RV during B.C. heat wave

Dog spotted in crate strapped to back of RV in B.C. heat wave seized by SPCA

At number 10, a story that touched a lot of people. A dog was spotted in a crate, strapped to the back of an RV, during an intense heat wave in the province.

The German shepherd was first spotted June 28 in a crate on the back of the RV on Highway 1 near Abbotsford.

The BC SPCA said police were able to trace the dog’s owner and got a warrant to seize the animal.

The dog will eventually be put up for adoption.

Video shows Tesla driver who appears asleep at the wheel on B.C. bridge at rush hour

At number nine, this story went viral in October when Global BC received a video of what appeared to be a woman asleep at the wheel of a Tesla.

She was ticketed for driving without due care and attention, following the video’s circulation on social media.

It was shot northbound on the Ironworkers Memorial Bridge during rush hour.

“I looked out the passenger window and noticed what looked like somebody just completely asleep,” said the man who shot the footage and asked not to be identified.

“From what I saw, they were out like a light, but then there was a couple moments where it looked like they almost woke up, then went back to sleep.”

At number eight, viewers were stunned at this video of a large funnel cloud that formed near the Vancouver airport.

The cloud was spotted in the Strait of Georgia near YVR in November and prompted Environment Canada to briefly issue a tornado watch for parts of the Lower Mainland.

All but 50 cars sold in bittersweet ‘Rust Valley Restorers’ auction

At number seven, a story that made headlines around the country when the gearhead behind the popular TV show Rust Valley Restorers held a successful and “bittersweet” auction in October that emptied out his famed “field of dreams” in Tappen, B.C.

That was where more than 550 of Mike Hall’s classic cars had been parked for decades, awaiting restoration to their former glory — a process that famously plays out on the show.

By the time the weekend ended, all but 50 had been sold to the highest bidder.

1:49COVID-19 patient pleads with others to get vaccinated

‘I chose not to get the vaccine’: B.C. mom battling COVID speaks from her ICU bed

At number six, a woman’s plea to get the COVID-19 vaccine that went viral.

Sharlene Amerl, a Vancouver Island mother of two, shared her experience battling COVID, after she had chosen not to get vaccinated, in the hope that others will choose otherwise.

Amerl had leukemia when she was six years old and was worried about how she would react to the ingredients in the vaccine. She said messages posted online seemed to confirm her fears.

However, when she caught COVID, she said she became so weak so quickly, all she could do was sleep for about 20 hours a day. She said she took vitamins and stayed hydrated but nothing worked.

“I chose, unfortunately, not to be vaccinated because I thought I could beat the odds, but also because I was terrified from the information I had read online about potential side effects that seemed to have affected some people,” she said.

“And it scared the living daylights out of me.”

Another COVID-related story comes in at number five: A Vancouver restaurant defied a ban on indoor dining for three weeks.

Police said a liquor coordinator and provincial health officers attended Corduroy Restaurant in Kitsilano in April and issued a full closure order. But the restaurant was still open when Global News attended one night.

Video posted to Facebook shows what appears to be Vancouver Coastal Health staff attempting to speak with owner Rebecca Matthews.

Matthews, who is unmasked and has an infant strapped to her chest, tells the inspectors she does not recognize their jurisdiction and that they are trespassing.

Diners at the packed eatery then begin to chant “Get out! Get out!” prompting the health officials to leave and the crowd to cheer.

1:48The story behind the Vancouver riot kissing couple photo

The story behind the Vancouver riot kissing couple photo – Jun 20, 2011

10 years later: The Vancouver riot kissing couple is still together

At number four, a video that provided an update to arguably the most memorable image from Vancouver’s Stanley Cup riot 10 years ago.

In June 2011, photographer Richard Lam shot thousands of photos of people rioting in the streets after the Vancouver Canucks lost to the Boston Bruins in Game 7.

One image stood out.

Known as the Vancouver riot kissing couple, Lam captured a moment where a man was giving a woman a kiss as they lay on a city street with police in riot gear around them.

Turns out, the couple is still together and now lives in Australia.

2:09Lottery winner warns others to be careful when sharing tickets

Lottery winner warns others to be careful when sharing tickets – Jun 8, 2021

A warning in June from a North Vancouver man about sharing a lottery ticket was our third most viewed video of the year.

Rick Kinnear and his friend had a $1-million winning lottery ticket, but he had to wait for his winnings as he didn’t have a formal group play agreement.

Kinnear eventually got his money, but he said it was a warning to everyone about buying group tickets.

At number two, a legend of B.C. made headlines again after a group of travellers spotted what they say might have been Bigfoot — also known as Sasquatch — in the West Kootenay on Christmas night, 2020.

In a January 2021 interview, four friends told Global News they had been heading home on Highway 6, just south of Silverton, on the evening of Dec. 25 when they saw a “huge, man-like figure” on the side of the road.

They investigated further and found tracks in the snow.

“The surrounding pristine snow proves the tracks were not fabricated by humans,” he said.

2:00B.C.’s Coquihalla Highway seen from the air shows extent of the damage

In the number one spot, the most viewed video on the Global BC website in 2021 showed the extent of the flooding devastation along the Coquihalla Highway after a series of atmospheric rivers hit in November.

Aerial photos and videos highlighted how much the record-breaking rain and landslides affected so many parts of southern B.C.  The Coquihalla was damaged in 20 different places on a stretch about 130 kilometres long.

The government has said the major route that connects the Lower Mainland to the Interior will reopen to commercial traffic and inter-city buses on Dec. 20.